Dubai On A Budget: Nithin’s Romantic Trip To Dubai Is A Perfect Example Of Smart Travel! 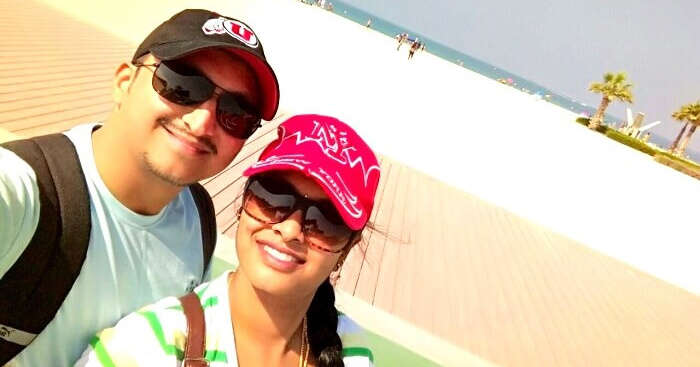 Impulsive, easily managed, and friendly on pocket. Everything about a short trip is appealing to the eye. Nithin elaborates on his short romantic trip to Dubai that gave him a sense of joy and satisfaction he desired for long. The trip cost him a total of INR 78,500 which included their flights, transfers, accommodation, sightseeing, and breakfast.

My wife and I were looking for a short vacation on an extended weekend. At first, we thought of exploring a domestic destination. But, as soon as I got to know about good flight deals for Dubai, we were convinced about the trip.

I got to know about TravelTriangle while searching for tour packages to Dubai. I had an option of making my own itinerary as the trip was of 4 days and planned at short notice. I submitted a query with TravelTriangle and got a revert back on the same.

Zishan connected me to various agents providing me with multiple offers for a package to Dubai. I finally found the most competitive deal given to me by ‘Dream Travels’ agency. My wife and I were excited about experiencing the Middle East and along with that also paying a visit to an old friend.

We took our direct flight from Bangalore in the morning and arrived in Dubai at 10 am. The driver was present to receive and drive us to the hotel. The sun was shining bright and the sub Saharan terrain feel was already setting in. We checked into the hotel and had lunch immediately.

I’d done my homework before coming to Dubai. Hence, I already arranged for 2 metro passes my wife and I to explore the city on our own. After a few hours we returned to the hotel to get ready for the Dhow Cruise. The driver arrived at the hotel at 7 pm to take us to the cruise.

We arrived on to the harbor and stepped onto a large traditional Arabian boat called a Dhow. The night began with a cultural performance of dance and arts which drew lots of applause and gasps from the audience. Following the performance, we had dinner on the Dhow Cruise while it was meandering in the Persian Gulf. The cruise ended at 10.30pm and we were driven back to the hotel.

Day 2: Palms in the ocean

Suggested Read: Abhinav’s Memorable Family Trip To Dubai Had Him Wishing He Could Stay There Forever!

The next morning,we had breakfast and got ready for the Dubai city tour. The tour bus picked us up outside the hotel and we started at 10 am with a visit to the World Trade Center. A common theme in Dubai I saw was the magnificent modern architecture built to impress and galvanize.

Next up, we covered the monorail of Dubai. Afterwards, we were taken to the man made wonder in Dubai- Palm Jumeirah. An island created off the coast of Palm Beach in the shape of a palm tree. On every branch of the palm tree we could walk and drive by all the beautiful houses and restaurants. The tour ended on a slightly unfortunate note as the bus broke down and we had to take a cab back to the hotel and get ready for the evening Desert Safari.

The driver arrived at the hotel at 6 pm for the Desert Safari. However, we were grouped up with a group of elderly people who specifically requested not to venture out in the desert for a bumpy ride. At first, I found ourselves to be a bit hard done-by, but ultimately we went with the flow and it turned out to be a great ride nonetheless. We got back to the hotel at 9 pm and retired for the night.

Day 3: Scaling the tallest building in the world

We woke up late next morning as the schedule was empty for us in the first half. Post breakfast, we proceeded for shopping at the Gold Souk market. To be in Dubai and not buy gold would be a huge mistake. Post lunch, we returned to the hotel with some bling to get ready for the evening sightseeing.

At 3 pm, we started from the hotel for the aquarium and underwater Zoo in Dubai. It was a fascinating walk inside the zoo which had glass viewing chambers all around us to see the beautiful marine life.

Finally, we moved towards the grande finale of our Dubai sightseeing. They don’t come any taller than this. We drove to Burj Khalifa and took it’s famed super fast lift up to the 124th floor at 7 pm. The view from the top was breathtaking. Never had I seen the world so beautiful. The bright lights that shimmered gave us a stark reminder of how little we are. Yet again, Dubai surprised us with a marvel that pushes the realms of possibility in human achievement.

After spending two unforgettable hours at the top of Burj Khalifa, we caught up with an old friend to have dinner. We took a taxi back to the hotel at midnight and rested for the night.

After breakfast, we checked out of the hotel to depart for Bangalore. We said goodbye to stunning Dubai with a 10 am flight back home.

Out of all the places I’ve visited in my life, Dubai astonished me the most. It was like visiting an oasis in the true sense of its meaning. I’d love to visit Dubai once again, for a longer time.

Wanna experience thrilling Dubai? Book yourself a Dubai tour package and visit the tallest building in the world!

Parasailing And Paragliding In Dubai: A Guide To All The Famous Spots!

Dubai In June 2021: What Makes It A Happening Tourist Destination Even In Summer