Orchha Fort: A 2022 Pocket Guide To Exploring This Charming Place 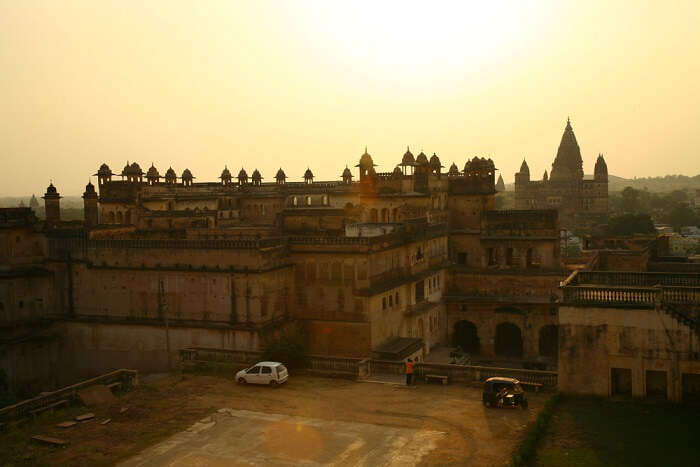 With so many places to explore around in the stunning land of India where you can witness a changing a pattern in the terrain, Orchha is yet another place that is renowned for its temples, palaces, and forts that will woo your senses. One such must-visit place in Orchha is the famous Orchha Fort that you have to visit.

Also placed amongst the tentative list of UNESCO World Heritage Sites recently, this place has various places for every kind of travel enthusiast. If you’re planning a trip to this amazing town anytime soon, make sure you don’t miss out on this guide.

Located on the island of Betwa river, Orchha Fort is a beautiful historical place that attracts many tourists every year. Built by the Bundela Rajput Rudra Pratap Singh in the 16th century, this fort complex took a couple of following years to be completed by several successive rulers of Orchha State. Several attractions like Raja Mahal, Phool Bagh, Rai Praveen Mahal, and Jahangir Mahal along with Sheesh Mahal add more to the beauty of this fort complex.

Must Read: 20 Tourist Places Near Indore To Experience The Magic Of Madhya Pradesh In 2022

Events At The Fort

Curated with a wide range of effects and sounds, the Light and Sound show in Orchha Fort will make your holiday even better. While you’re in Orchha, this experience is surely not to be missed. Also available in two languages, this show has a unique vibe to it. You can watch the one in English at 7:30 PM to 8:30 PM or the one in Hindi from 8:45 PM to 9:45 PM. You’ll be surprised to know so much about the history of Orchha town with this amazing show.

The fort was built immediately after Orrcha was founded in the year 1501 by  Rudra Pratap Singh, a Bundela Rajput. Soon after him, the fort was expanded – palaces and temples were built inside the complex. Of all this, the Raja Mahal or Raja Manadir which was  built by Madhukar Shah between his rule from 1554 to 1591, is till date the most popular palaces. The Sawan Bhadon Mahal and Jahangir Mahal were built by Vir Singh Deo between 1605–1627.

All these monuments make what we call today as Orchha Fort. It is known to believe that Britishers took influence from this fort to build the Lutyens Zone in Delhi, which is a huge masterpiece of architecture.

Suggested Read: 11 Places To Visit In Orchha For An Eccentric Vacation In 2022!

Orchha lies in the Bundelkhand region of India. It is known to be mostly a dry region with very less rainfall. Therefore, the best time to visit Orchha would be winters when the temperature above is pleasant, apt  and highly comfortable to tour around the fort and other interesting places in Orchha. Therefore, from October to February would be the best time to plan a trip to Orchha.

Suggested Read: 10 Stirring Things To Do In Orchha That Will Help You Explore The Heart Of India Entirely!

How To Reach The Fort

Orchha in Madhya Pradesh is quite easy to reach from the major cities like Delhi, Mumbai and Chennai. The nearest railhead is Jhansi and closes airport is at Gwalior. Jhansi is at a mere distance of 18 km from Orchha. Upon reaching the town, you can navigate your way via a cab using Google maps.

India has a significant historical past that several tourists are aware of. This is one of the reasons that attracts them to this land. While Orchha Fort adds more to this glorious past and exquisite sightseeing activities in Madhya Pradesh, there’s much more to this place. Find out what this place has in store for you with a perfect holiday to Madhya Pradesh.