10 Stirring Things To Do In Orchha That Will Help You Explore The Heart Of India Entirely! 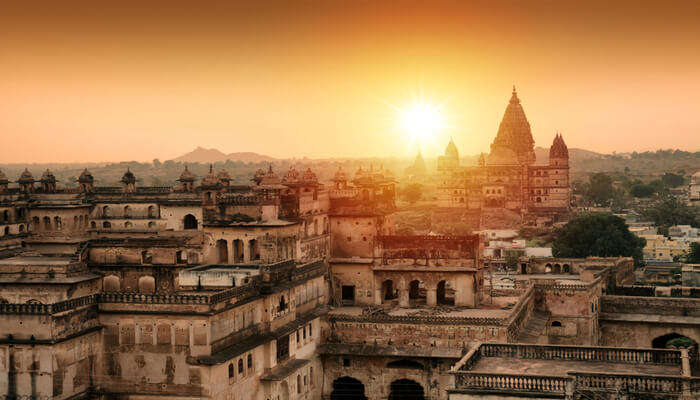 There is a town in the Newari district of Madhya Pradesh, Orchha. The town is filled with heavenly bliss and charm. This place is the center of attraction for the tourists coming from all over the world. The town was established somewhere in1501 by king Rudra Pratap Singh. The town of Orchha lies on the Betwa river. It is situated on the outskirts of Madhya Pradesh, and almost 15 kilometers away from Jhansi, Uttar Pradesh. This is a historical place with many attractive historical monuments. There is no dearth of things to do in Orchha for those history and fun lovers. Take a look at this list of all the experiences that one can encounter on their trip!

Top 10 Things To Do In Orchha

The town of Orchha is situated on the Betwa river which is again adventurous and thrilling to hear. While visiting there, make sure to try out the listed things below.

1. Explore The Monuments And Architecture

A large number of temples are there with beautiful art and architecture, and witnessing them is one of the best things to do in Orchha. The center of attraction is Jahangir Mahal, Raj Mahal, and Pravin Mahal. All these great monuments are reciting their glorious past and a fine sample of architecture around 500 years ago. Raj Mahal is the most ancient monument at Orchha. Pravin Mahal was once beautiful, now it is in ruins and reciting its glorious days to the visitors. The view from the windows of these monuments will leave you speechless, and for once you would feel to think that how kings and their families were living with such extraordinary comfort.

Must Read: Orchha In The Tentative UNESCO World Heritage Sites List For The First Time Ever

3. Have A Sound Walk In Phool Bagh

The place called Phool Bagh is one of the great examples of Orchha magnificence. All the beauty and peace have been carefully preserved in the Phool Bagh. This beautiful garden was the place to rest for the kings then. This garden was built in the memory of Dinman Hardaul. The whole architecture and engineering of this place are done with such beauty and artistic manner, which drags tourists here to have a glimpse of this place. A garden house was built nearby to it so that it can provide a cooling effect to the place. Another striking feature of this place is that it has a water ventilation system which directly connects it to the palace.

4. Boating In The Betwa river

Orchha is on the Betwa river. One should visit the river and go for a river rafting in the Betwa river. The beauty of the river Betwa is incredible as the freshwater of the river will fill the heart of the tourist with delight and immense pleasure. The river flows along the wildlife sanctuary and one can get a quick glimpse of the sanctuary. The river flows along the Chhatris of famous Bundela rulers. Being a center of attraction, the place is also religious according to locals. There are various water bodies in the town of Orchha and its vicinity.

The town of Orchha is surrounded by thick and dense forests. The forest is the home of wild animals and one can spot them through jungle safari. This wildlife sanctuary is regarded as one of the best of Madhya Pradesh. This was established in 1994. The sanctuary is home to some dense plantations like Dhawa trees and Kardhai trees. Betwa river along with the Jamni river flows through the sanctuary. The wildlife sanctuary is spread in the area of 45 square kilometers. Many adventurous things can be done in this area like, trekking, canoeing, fishing, etc. the place is a natural habitat of a variety of flora and fauna. Animals like deer, blue bull, jackal and other species can be spotted too.

Suggested Read: 10 Honeymoon Places In Madhya Pradesh Every Couple Should Visit In 2021

6. Visiting History In The Form Of Chattris On The Betwa river

The chattris are enough to make us remember the great rulers of Orchha. This monument is built in the memory of those great rulers. There are a total of 14 chattris. The chattris and its construction are shrouded with mystery as well as historicity. These giant palaces recite the history of rulers of this place some centuries ago. The chattris were made in the memory of the minister called Bir Singh Deo. This glorious palace has its relation with the Mughal king Akbar. All 14 chattris are of exquisite view and gives an example of beautiful architecture.

Location:: opposite to Orchha sanctuary, near the banks of Betwa, Orchha, Madhya Pradesh
Timing: 10:00 AM to 5:00 PM
Entry fee: INR 200 per person

The interesting history of ram raja temple discloses the fact behind the birth of lord ram. The temple revolves around the unexplored part of lord ram as well as the area of bundle kingdom. Lord Rama is worshipped here as the only ruler and the divine power at this place. This is the place which is run and managed by the divine grace of Lord Ram, and whosoever lives here is happy and prosperous. Sitting alongside river Betwa, several tales you can hear narrated by the locals of this place. Lord ram is taken as the divine figure of righteousness and wisdom in Hinduism. It is not easy to find the description of this temple in Vedas and Puranas. But a good description can be seen in the Ramayana. All these things are adding more grace to the temple of ram raja.

The Orchha fort shines with colorful lights when the glorious history of Orchha is displayed with lights and colors. The laser light show is a beautiful representation of the history of this place in a beautiful manner. The beautiful architecture of the palace can be seen easily when the palace is decorated with colorful lights and hues. It is similar to the Akshardham temple of Ahmedabad and New Delhi. After taking this face in concern that Orchha fort is a big tourist spot, authorities decided to organize this show to add more adventure to the visitors.

Suggested Read: Monsoon In Madhya Pradesh: 5 Best Places To Visit In The ‘Heart Of India’ In 2021

10. Have A Halt At Sheesh Mahal

Sheesh Mahal is one of the most beautiful places at Orchha to stay. Sheesh Mahal can be taken as the traditional and cultural view of the Indian part. The palace recites the level of hospitality and charm which this was holding some centuries ago. This place was once the palace of the king of Orchha, Raja Udai Singh. The place is also known for its multi-cuisine system which delights the heart of visitors. The interior of the palace is commendable. Walls are painted and ornamented with beautiful and costly ornaments. The art and craftwork inside the mahal depict the cultural and artistic value of India.

With no dearth of things to do in Orchha, this can be one of the best tourist destinations for visitors visiting Madhya Pradesh. This place is a small heaven situated on the Betwa river having the beauty of natural surroundings and peace. Magnificent view of Betwa river and exquisite wildlife sanctuary safari adds charm to the Orchha, making it a must-visit to the lovers of nature and history. The tradition and culture of the Orchha is something which attracts everybody towards it. Hence, whenever you decide to plan a vacation to Madhya Pradesh, do consider paying a visit to this beautiful destination.

Frequently Asked Questions About Things To Do In Orchha

What are the things to do in Orchha?

One can spend a beautiful holiday here in Orchha by visiting a good number of historical sites and can enjoy jungle safari, with boating in the Betwa river.

How to reach Orchha?

Orchha is a small town in the state of Madhya Pradesh and very much near to the district of Jhansi, Uttar Pradesh. By rail or road transport, one can reach Orchha.

What are the things to do which don’t cost in Orchha?

One can visit temples and shore of the Betwa river. It is free and will give the visitor a natural pleasure.

Can one tour the whole Orchha in one day?

No, the whole Orchha can’t be toured in one day. This place is full of beauty as well as beautiful places. One has to give some days to enjoy the warmth and pleasure of this place.

Is there anything historical in Orchha?

Yes, Orchha is itself a historical place. This town has a glorious past of 500 years since it was established. The town has temples and many other things that can be counted under the category of history.

What is the best time to visit Orchha?

Orchha is an evergreen place. This place can be visited anytime. Whether it is summer or winter or rainy or spring, one can visit Orchha.

How to get acquainted with tourist spots?

Is there any threat to the wildlife sanctuary?

No, the wildlife sanctuary is safe with the all-time patrolling team inside. The safari is taken under the supervision of experts.