Paragliding In Austria: Head To These Amazing Destinations In The Heart Of Europe In 2021! 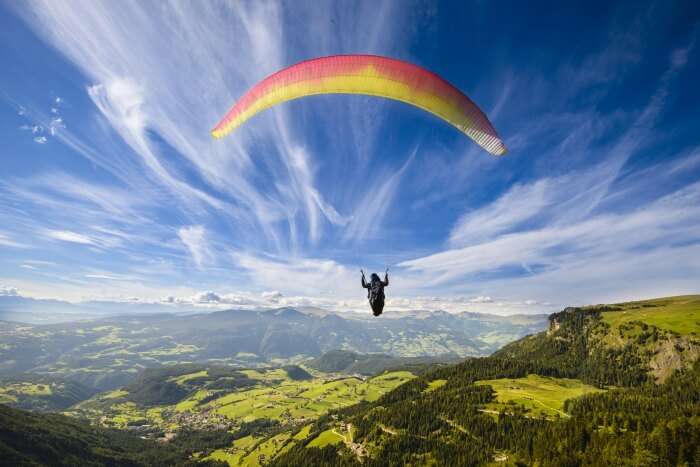 Austria is known for being the favorite pick of thousands of adventure lovers who end up here while chasing thrill. If the thought of floating in the air in a heavenly location sends chills down your spine, it’s about time you make a checklist of paragliding locations. Paragliding in Austria is an experience that you shouldn’t be missing out on if you claim yourself to be a sucker for adrenaline rush. So, wait no more and tick paragliding off your list in 2021!

Best Time To Go For Paragliding In Austria

It’s crucial to plan your trip according to the weather conditions of the region as harsh winters might end up putting a halt to your paragliding aspirations altogether. Summer and spring seasons are quite suitable for paragliding as the weather is favorable for this sport. This is exactly why you must ensure that the time of your trip should be decided before you hop onto the paragliding price of Austria.

10 Superb Places For Paragliding in Austria

With the number of paragliding locations that Austria has, it is safe to say that you will not be able to say no to most of these locations. Here, check out the list and note down where you’d like to fly in Austria!

There is hardly going to be a better location than Tirol to start off this list. The thing about Tirol is that paragliding is permitted within the entire region of Tirol along with a large number of spots to choose from. For paragliding in Tirol, Austria, you can start your journey from various paragliding centers where a professional glider can take you along all the way up in the skies. So, even if you don’t have any experience in this sport, Tirol can provide you with the suitable training required for the same.
Yet another reason why Tirol tops this list and shouldn’t be missed at any cost is the sheer number of paragliding events that take place throughout the year. You can join thousands of enthusiasts from all over the world who come here to witness get-togethers, competitions, expos, and championships.

Starting from the launch sites of Krippenstein, you can dive over Hallstatt with a view so delightful that it’s going to be etched in your memory. The savory view of Hallstatt lake can be enjoyed while paragliding in Hallstatt, Austria if you take off from Zwieselalm, Russberg or even Kalmberg. Krippenstein has launch sites located at a height up to 2,100 meters above sea level, you can also choose to take off from slightly below the topmost station. Hallstatt should be in your list if you’re about to plan your paragliding trip anytime soon. You can book a resort in the area nearby and take yourself on a smooth ride down the mountains, gazing a view that is nothing less than pure bliss to the eyes.

The Serfaus-Fiss-Ladis area of Austria is popular for its homely ski resorts in winters. This place also provides very suitable conditions for paragliding. The best takeoff regions include the Schönjoch ridge which has really good thermals. The ridge is also easily accessible via cable cars and even children can experience this flight.

The experience of paragliding here in the winters is the best. To paraglide in the Serfaus-Fiss-Ladis region is a lifetime experience and you should definitely check this off your list if you have a thing for adventure sports.

Innsbruck is yet another favorite pick of para-gliders and can provide you with a wonderful experience of flying like a bird. The nearby areas of Innsbruck are often chosen by tourists as you can get affordable accommodation if you plan to stay in Patsch, Igls, Natters or Mutters. If you’re going for paragliding in Innsbruck, Austria, a breathtaking view can be experienced once you’re gliding down the skies. Most of the people who end up here do not have much experience in paragliding and Innsbruck caters their needs by providing the required set of training. Hiring a professional paraglider can also turn out to be a thoughtful decision if it’s your first time turning your dream into reality.

Image Source
The Zillertal Valley in Austria is another region with multiple takeoff spots in the higher mountain regions. The valley offers a wide variety of learning centers which master in tandem flights and courses for paragliding. The main hubs of paragliding in this region consist of the Zell am Ziller village, which is also famous for holding world cup events on many occasions.
The valley is also easily accessible due to the ski lifts that are available both in summers and winters. It is a bliss to paraglide here on clear days in the winter season because of the picturesque sight provided by the surrounding mountains.

This Austrian city is divided by the Salzach river and houses several buildings and monuments of rich cultural importance. Paragliding in Salzburg, Austria should also be in your list if you’re going on a paragliding spree in this country. Professionals gliders can even perform acrobatics in the air while paragliding in Austrian Alps. So, even if you lack the experience, a few extra bucks can bring an unforgettable set of moments.

Suggested Read: 10 Best Places To Visit In Austria That Are Straight Out Of A Picture Book

Alpbachtal-Wildschönau region has gentle slopes which are suitable for paragliding all throughout the year. One of the best and most famous takeoff points in this region is the Markbachjoch ridge which is 1,450 m high. This ridge is also famous because of its suitability for novices and is known to be the most famous paragliding spot in Austria. This mountain range is located in the Alpbachtal Valley making it all the way more suitable for paragliding. This is because it remains guarded against the very strong winds of Inn Valley. Alpbachtal-Wildschönau region also offers you a number of options for learning paragliding.

Again, the Wilder Kaiser mountain region is a well-known name for paragliding. The two most popular takeoff points of this region include the Hohe Salve and the Choralpe mountains. However, Hartkaiser mountain can also be found suitable for paragliding during the days with good thermals. This part of Austria is known for its gentle takeoffs that make it fit for paragliding all year round. You can also find multiple paragliding centers offering tandem paragliding in Austria for beginners and amateurs. There can be no better choice to admire the amazing view of Kaiser mountains other than this.

Suggested Read: The 10 Most Beautiful Lakes In Austria For An Exotic Europe Getaway

The Stubai valley is also known as the best spot for excellent thermals. This is due to the presence of a lot of mountains which are over 3000m high, in and around this area. This region is one of the most popular places for paragliding in Austria. The mountains also make the thermals of the place extremely good, being the best from February onwards. This place provides a lot of learning options for paragliding novices. A lot of resorts are also available that promote skiing and cable cars, thus making the region more interesting and easily accessible.

The location of Achensee lake is what makes it suitable for paragliding in Austria. This lake is located in a canyon and the surrounding mountain ranges make it possible for the paragliders to stay in the air for a significantly longer time. The Karwendel range side of the Pertisau region is considered the best for hang gliding in Austria for amateurs. The starting point is near the top end of the Karwendelbahn Gondola. You can enjoy your ride and then stroll to Mauritzalm Alpine pasture hut, which is located about 1813 m above the sea level. From this height, you can savor the blue waters of the lake and an amazing view of the mountains. Also, you can take a long flight in this region.

It isn’t quite rare to find paragliding sites in Austria as the country is flooded with the number of such location. However, picking the best paragliding in Austria is an experience of a lifetime that you should put on your bucket list. Hence, put them on your things to do list when visiting Austria.

Q. Is paragliding in Austria safe?

A. If one follows the rules and the instructor is experienced, then paragliding is pretty safe.

Q. Where can I go paragliding in Austria?

A. Some of the places to go paragliding in Austria are:
1. Tirol
2. Hallstatt
3. Serfaus-Fiss-Ladis
4. Innsbruck
5. Zillertal Valley

Q. Can you paraglide in the rain?

A. It is advised to not paraglide in rainy weather.

Q. Which is the most famous place in Austria for paragliding?

A. Alpbachtal Valley is one of the famous places in Austria for paragliding.