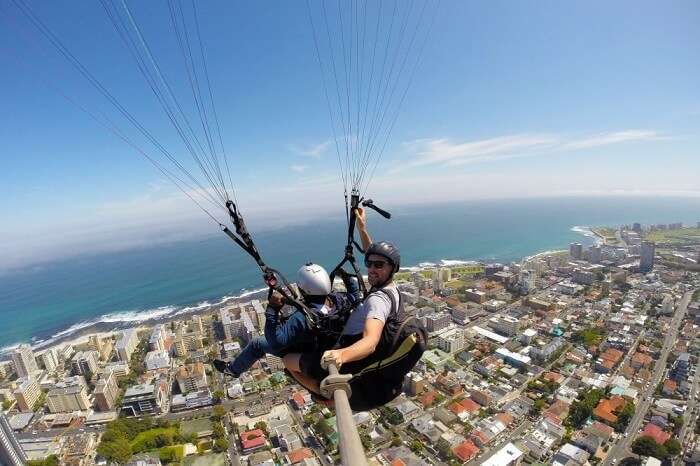 We have always nurtured a dream of flying and I am sure paragliding in South Africa will surely realize your fantasy to fly. We get jealous looking at the birds who can fly across beautiful valleys and picturesque mountains and people have always done what they dreamt, the Wright brothers were the first people who gave wings to our dreams of flying but we people are very greedy, we always want more, we wanted to actually feel the adrenaline rushing while flying and to feel the cold air of nothingness stroking our face and then came David Barish who was the first person to ever paraglide successfully in the 1960s.

A paragliding flight generally lasts for 30 minutes and the pilots are experienced paragliders and they ensure to give the passengers an exhilarating 30 minutes of their lives flying across the stunning city, Winelands, clear and sparkling waters, native forests and the magical and beautiful Table Mountain. Some of the spots for best paragliding in South Africa are:

Porterville is town situated 140 kilometers from Capetown. It is a summer flying site so the para fanatics have to soar the skies all around the year. It offers the views of dry fields which are browned by the soaring summer temperatures of Capetown. Experience the wow factor paragliding in Porterville offers to you. However, it is a site for cross-country paragliding only. The number of gliders per day is limited since it takes a lot of time going cross country.

It is only done by experienced paragliders. It is one of the most difficult paragliding launch sites. The launch site is positioned at a height of 1000 meters above the sea level which is quite high and now you can understand why in the start we gave a warning that it is only for the experienced paragliders. One has to hone their flying prowess in other paragliding spots before trying Table Mountain. But once launched from a height of 1000 meters, breaking a sweat one gets the prize of flying across the wonderful views of the Cape Peninsula.

Suggested Read: Best Waterparks In South Africa – Get A Little Splashy And Live The Childhood Dream!

It is one of the best places for paragliding in Cape Town, South Africa. It has a takeoff at 420 meters above sea level which makes it second most challenging takeoffs in Capetown after the Table Mountains. One can enjoy the wonderful views of the Overberg region. Wilderness is the most frequented paragliding spots in South Africa. The wind conditions are favorable all throughout the year but winds can get a bit wacky from June to August but the pilots are all experienced people and they mostly ensure harmless and smooth landing also during the troubled times. Here in the wilderness, the Para fanatics get to experience endless ridgeline soaring, exciting thermic conditions, white beaches for soft landings and the lush greenery with mindboggling views for top landings. For a beginner, wilderness has so much in store that it will stretch their imagination too.

It is just about 54 meters above sea level. The takeoff starts in Kleinkrantz and then cross the dunes to the Paradise Ridge. The landing is generally on top and Kleinkrantz or sometimes the landing happens at the bottom of the dunes. It all depends on the course of the winds. The highest one can fly in Paradise Ridge is to 465 meters above the sea level. And if one is happy to spend with both hands for the experience one can hire a jet to the takeoff site which is not that costly though.

It is also 54 meters above sea level. The takeoff starts in Kleinkrantz car park. If the winds are stronger it is recommended to takeoff from the big parking area. The flight regulation here too is 465 meters above sea level. The best part is you will get to land on the sand dunes. The crossover between the sand dunes and sea looks fabulous from the sky. Beware of the strong winds and whitecaps on the sea though.

Serpentine overlooks the ‘Wilderness National Park’ and also we can see the crawling river Serpentine in Wilderness, South Africa. The takeoff area is grassy here and the landing happens in quite a small space so this spot is only for the basic pilots. The highest you can fly in Serpentine is 305 meters above sea level. The winters are avoided in Serpentine and the Spring and Summer months are favored as the winds are in good mood in the Summers and Spring.

Sedgefield is a paragliding heaven. The best time for paragliding here is from December to February. Paragliding is offered all through South Africa but is most outstanding in Sedgefield. Sedgefield boasts of a large number of lagoons, valleys, estuaries, exquisite shorelines, and lush forests. We get Sedgefield and Wilderness on our trip from Knysna to George, so we will have many options to choose from. Make sure to stop by here.

Parys is also a preferred destination of the paragliders. The paragliding launch site depends largely on the wind direction. Sometimes the launch site is pre-decided, but later it is moved as the course of wind changes during the day. Parys comes to life in spring and turns into a paragliding playground. Paragliders get to experience the mystic mountain ranges, native forests, and valleys that Parys offers. Make sure to try paragliding here.

Q. Where can you do paragliding in South Africa?

A. There are several different places in South Africa where one can go paragliding including Porterville, Table mountain, Sir Lowry’s Pass, Paradise ridge, Kleinkrantz dunes, Serpentine, Sedgefield, Parys and many more.

Q. What is the duration of the paragliding session in Porterville in South Africa?

A. Each session of paragliding in Porterville in South Africa last around thirty minutes to two years. Depending on your budget, you will be able to enjoy paragliding quite efficiently.

Q. Is paragliding in table mountain suitable for beginners?

Q. What is the apt time to go paragliding in Sir lowry’s Pass?

A. Sir Lowry’s Pass is not only a perfect place for paragliding, but the scenic beauty of the site is quite breathtaking. You will have a great time out there if you visit South Africa at any time of the year except between June to August.

Q. Can a beginner take part in paragliding in Serpentine in South Africa?

A. Serpentine allows its guests to fly up to 300 meters above sea level and hence is perfect for beginners to start their paragliding journey. If you want to visit there, you should avoid the winter to enjoy the place thoroughly.

Q. Where does the paragliding journey of Kleinkrantz dunes start from?

A. Kleinkrantz dune is a fantastic site where you could take part in paragliding. The journey of the flight starts from Kleinkrantz car parking.

Q. How can one reach Porterville from Cape town?

A. If you want to paraglide in Porterville, you can reach there easily from Cape town because the distance between them is 145 km.

Q. How can one travel to Parys for paragliding in South Africa?

A. Parys is located at a distance of 110 km from Johannesburg. Hence you could easily reach there by travelling to Johannesburg.

21 Top Things To Do In Sikkim In 2020 For Unbeatable Adventures In Breathtaking Landscapes!

20 Best Himalayan Treks Under 10K That You Must Include In Your Bucket List!