Philippines Food: 10 Traditional Dishes That Every Traveler Must-Try At Least Once 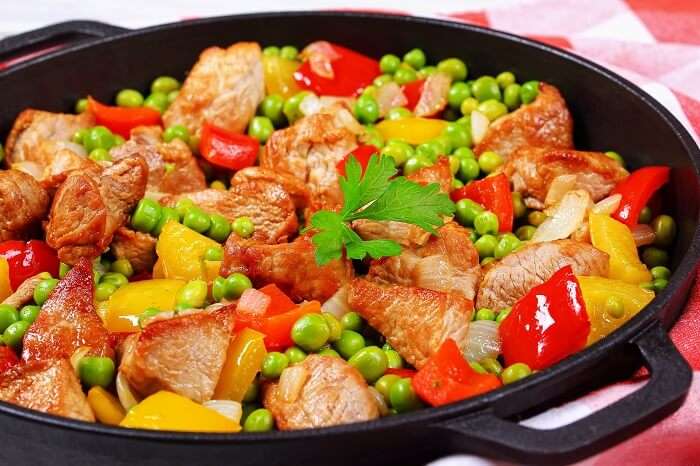 While traveling to a new place, one of the first things that everyone would like to relish the culinary delights for sure. And when in Philippines, one of the things you must do is get a taste of its traditional cuisine. The Philippines food and culture is rich and diverse, and you will definitely love experiencing them. Influenced by Spanish, Indian, Chinese and the Malay Kingdoms’ cuisines, Filipino cuisine is an experience in itself.

Top 10 Philippines Food For Everyone To Try

Nonetheless, make tasting these best traditional Filipino food dishes a part of your top things to do in the Philippines, and savor every moment of your culinary journey. Take a look at 10 of the best Philippines foods that you must try!

No list of the top 10 Filipino foods can begin without the famous Adobo on top. The unofficial Philippines national food is made with pork or chicken simmered in soy sauce and vinegar with loads of black pepper and crushed garlic. Adobo is one of the few dishes in the Philippines with local origins as it was given the Spanish name later. This lip-smacking dish is as Filipino as you can get, and it goes with nothing else but rice. Every family in the Philippines has its own way of cooking adobo, so it might taste a little different from place to place.

Must Read: Top 10 National Parks In The Philippines For Adding A Little Adventure To Your Trip!

Feel like tasting Filipino dishes for lunch? Try Lumpia. Influenced by Chinese cuisine, this dish is a delicious deep-fried spring roll. The roll is stuffed with a mixture of chopped vegetables and minced meat. Combined with the right sauces, it is the most scrumptious dish you will ever have for lunch. This is definitely a traditional Filipino dish after trying which, you will never look at spring rolls the same way again. It is a major part of Philippines food culture.

Suggested Read: Christmas In Philippines: A Guide To All The Merry Filipinos Traditions

Do you love roast chicken? Then you are in for a treat! The Visayan islands’ residents have perfected the dish, and you will never taste anything like Inasal. Marinated in ginger, lemongrass, and calamansi juice, the chicken is roasted over fire and basted with annatto oil. Served with rice, soy sauce dip, and sometimes liquid chicken fat, Inasal is definitely one of the Philippines food items one shouldn’t miss at all.

Suggested Read: 5 Best Villas In Philippines That Are Lavish, Luxurious, And Light On Pocket!

Also known as Pancit, this is another one of the most delicious Philippines foods influenced by Chinese cuisine. This simple dish is a combination of noodles and whatever meat or vegetables you want to add. Pancit is a name that originated from the Hokkien term ‘pian e sit’, which means ‘something conveniently cooked.’ It might be simple but it is rich with flavor and you will definitely love every bite of it.

Suggested Read: 5 Best Villas In Philippines That Are Lavish, Luxurious, And Light On Pocket!

Often associated with tamarind, Sinigang is a Philippines traditional food that is sour and savory. The dish is a stew made with spinach, eggplant, tomatoes, onions, ginger, and fish sauce. You can choose the meat you want to make the dish with pork, beef, fish, or shrimp. No matter which one you choose, the result is always a mouthwatering stew served with rice or eaten on its own as soup.

Suggested Read: 14 Philippines Restaurants Where All Your Food Dreams Will Come True

If you are looking for traditional Filipino food dessert, nothing comes quite close to the popular cassava cake. The Pinoy dessert is made with freshly-grated cassava flour and coconut milk. The cake is traditionally baked on coals, which gives it a flavor that ordinary cakes do not have. What is great about cassava is that you do not have to feel guilty indulging because it is known to have a wide range of health benefits.

Suggested Read: A Shopaholic’s Guide To Shopping in Philippines

With Spanish and Chinese influences, arroz caldo is a great choice if you are looking for healthy food in Philippines. The name of this wonderful dish literally translates to ‘rice soup’ in English. Similar to the congee of Vietnam, arroz caldo is a rice and chicken porridge stewed in broth, chives, ginger, and occasionally, saffron. If you want a dish that has a soothing effect on your stomach and offers health benefits, there is nothing better than a bowl of delicious arroz caldo.

Brought to the Philippines from Andalucia in Spain, chicharon is a dish of deep-fried pork crackling. It is quite similar to the chicharron of Mexico – crunchy rectangles of deep-fried pork rinds. In the Philippines, chicharon is dipped in coconut vinegar instead of salsa. This dish is one of the most popular Philippines foods to eat as a snack with beer. Over the years, locals have experimented with the dish, creating new variations. But nothing comes close to the original chicharon.

When it comes to popular Philippines food items present at every special occasion, lechon is probably one of the top ones. This is another dish with Spanish influence and no fiesta in the country is complete unless there is enough lechon for everyone. This dish is roast suckling pig that is cooked to perfection. Everyone loves the delicious crunchy skin. If you want to taste one of the most popular authentic Filipino dishes, you should definitely look for a place that serves traditional lechon.

Suggested Read: 15 Spectacular Philippines Islands That Have Been Carved By The Gods Themselves

One of the best things about visiting the seaside cities and towns in the Philippines is the regular availability of fish and other seafood. When in this beach paradise, try kinilaw, a vinegar-cooked ceviche in open flame. Kinilaw can be as simple as raw fish with vinegar dressing over it, but some of the restaurants serve the fresh dish with calamansi juice, soy sauce, shrimp, bits of pork belly, salted egg, and onions. Add kinilaw to your best Filipino food list.

Further Read: 10 Best Beaches In Philippines For The Love Of Sun, Surf, And Sand

Drooling already? Try these Philippines foods on your next holiday and try out the flavors that reflect the country’s multi-cultural influences as you embark on a gastronomic journey during your next international trip!

Q. What food is the Philippines famous for?

A. Philippines is famous for chicken adobo.

Q. What is the national food of the Philippines?

A. Adobo is the national food of Philippines.

Q. What food is Philadelphia famous for?

A. Philadelphia is famous for cheese steak.

38 Mouth-Watering Turkish Foods That Will Give Anyone An Instant Foodgasm (2020)!

Philippines In June: A Wonderful Time To Visit The Asian Nation

Philippines In September: Know All About Which Places To Explore & Where To Stay!