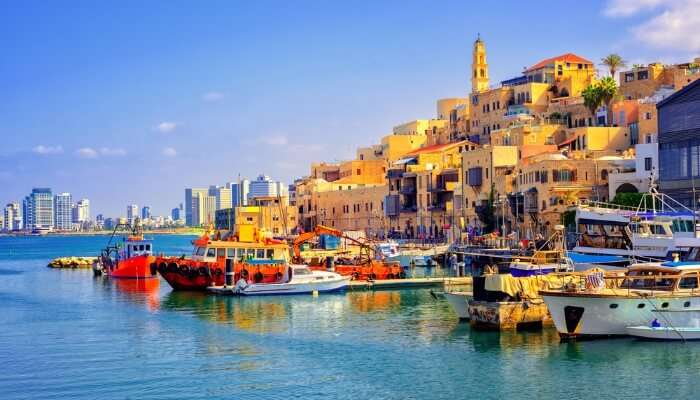 Tel Aviv, the second largest city in Israel is one of the most vibrant cities in the world. The place titled as the ‘Mediterranean Capital of Cool’ by the New York Times, is a 24-hour city that offers mesmerizing Mediterranean beaches, world-class nightlife, buzzing cultural scene, scrumptious delicacies, architecture recognized by UNESCO with a complete international outlook. If you are planning an excursion to Tel Aviv then don’t miss some of the best places near Tel Aviv that will surely amaze you with its enticing and incredible beauty.

The city of Tel Aviv is surrounded by numerous popular spots such as Masada & the Dead Sea, Petra, Jerusalem, Caerarea, Haifa, Rosh Hanikra and a lot more crowd-pleasing destinations that electrifies travellers from across the globe. You can plan a complete day tour from Tel Aviv and cover the places via local cab or bus and explore the diversity of this panoramic city and its surroundings.

The best time to visit Tel Aviv is from March to April and from September to November. Spring and Winter in Tel Aviv experiences pleasant weather and affordable prices. However, the place welcomes maximum visitor during summers with its enticing beaches. You might get an exciting deal if you are planning an expedition between May and August. An excursion in winters will make you witness thousands of European travelers reviving and relaxing here in their own pace.

Whether traveling with family, friends, partner or alone; a visit to the spellbinding city of Tel Aviv will surely be incomplete without exploring nearby places. Check out the best places near Tel Aviv:

Masada is an ancient fortification that lies in the Southern District of Israel. It is situated on top of an isolated rock plateau, overlooking the Dead Sea. It is one of the most popular tourist attractions in Israel that was constructed by Herod the Great between 37 and 31 BCE. Masada houses two fortresses, that is Hasmonean fortress and Herodian palace-fortress. One can witness the lowest place on Earth, that’s, Dead Sea from the highest of these fortresses. You can also plunge in the salty waters and enjoy some relaxing hours!

It is a salt lake that lies in the Jordan Rift Valley and has been attracting wanderers from around the Mediterranean Basin for thousands of years. This Earth’s lowest elevation on land is saline, creating harsh environment where plants and animals can not flourish, giving it the name ‘Dead Sea’. The water of this sea is 9.6 times as salty as the ocean, that makes swimming similar to floating.

Petra, also known as Raqmu is the most prominent city that links camel caravans between Mediterranean and Arabian Seas, from Egypt to Syria, beyond Greece. The engineering phenomena of Petra is enormous with sophisticated water systems, supporting 30,000 inhabitants. The raw beauty of this majestic place attracts millions of visitors as this entire city of ruins is a work of art, painted on a natural stone backdrop that changes color every hour.

Jerusalem, the city that’s believed to have a fourth dimension, that’s, the spiritual dimension. It is a holy place to Jews, Muslims and Christians; making it significant to over one-third of the people on the earth. Beyond its religious and historical relevance, the place has developed as the capital of modern-day Israel. One can take a complete day tour to Jerusalem from Tel Aviv to witness the culture and lifestyle of this ancient city.

Caesarea, a magnificent destination where astounding ancient harbor ruins, serene beaches and enticing modern residences lures the wanderers. It is originally an ancient Herodian port located on the Mediterranean Coast of Israel which is about halfway between Tel Aviv and Haifa. Recently, the site has been restored to create one of Israel’s most attractive and enticing archaeological sites.

Haifa, the third largest city in Israel, located beautifully on the slopes of mount Carmel facing the Mediterranean Sea is called as the ‘San Francisco of Israel’ by the Globetrotters. The city offers numerous tourist attractions such as Bahai Gardens, German Colony, and illuminating museums. The city has a mixed population of Jews and Arabs who resides peacefully, resulting in an interesting amalgamation of Arabic and Jewish cultures throughout the city.

Suggested Read: 12 Perfect Wedding Venues In Israel For Your Happily-Ever-After!

It is an incredible geological creation, lying in the farthest point north on Mediterranean Coastline. Rosh Hanikra, is a white chalk cliff face that offers spectacular grottos and caves which can be explored after an exhilarating cable car ride down the cliff. These grottos are the cavernous tunnels formed due to sea action on the soft chalk rock.

Are you planning an excursion to Tel Aviv? From bustling markets to impressive architecture and vibrant street art to serene beaches and succulent street food, the city features everything required to make a vacation memorable. Book a trip to Tel Aviv and get your itinerary customized according to your preferences. Do remember to visit the mentioned incredible places near Tel Aviv to explore the richness of dynamic Israel.