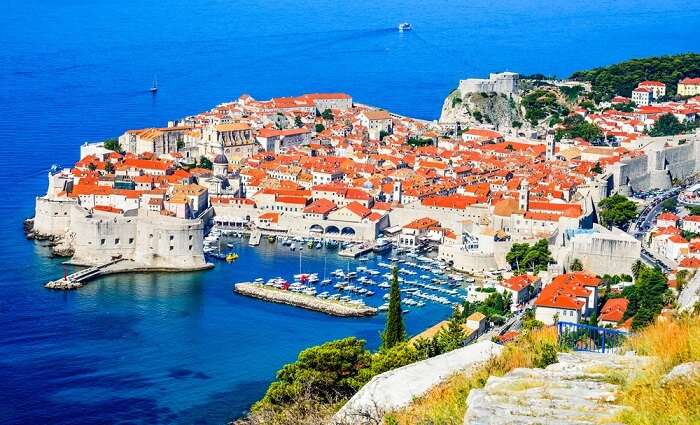 If you are on a Eurotrip, then Eastern Europe is a place that you just cannot miss. The Slavic traditions are reminiscent of a different time. Croatia’s Adriatic shoreline is a place of much beauty and culture, with the most distinct traditions in cuisine and language. The city of Dubrovnik is where you will likely find yourself if you decide to go on your Adriatic sojourn. The charming medieval forts and walls of Dubrovnik are complemented by a sea shore that has several excellent beaches and beautiful islands. Read on for a complete breakdown of places to visit in Dubrovnik that will help you have an authentic experience in Croatia!

10 Places In Dubrovnik No Traveler Should Ever Miss

Choose from this list of the 10 best places to see in Dubrovnik that are perfect for treating the culture vulture in you, and experience them in person on your next Croatian holiday!

The centerpiece of the Ragusan empire, the palace is a fusion of European Renaissance and Slavic Baroque styles of architecture and is one of the most stunning places to visit in Dubrovnik. The chief citizen of the empire lived on the first floor of the palace, which houses today the Cultural History Museum that is filled with ornate furniture and armor. The medieval charm of the place is so obvious that it was used as a filming location of Game of Thrones – the atrium of the palace of the Spice King of Qarth.

Suggested Read: 15 Places To Visit In Pula To Experience The True Croatian Charm In 2022!

The massive stone walls of Dubrovnik around the Old Town were completed in the 16th century, and are an awe-inspiring reminder of the fact that the city’s place in the history of the world. The best way to truly appreciate the scale and beauty of the walls that enclose the World Heritage site inside is to take a walking Dubrovnik city walls tour all along the battlements. You should check the Dubrovnik Port Authority website to see when the cruises are going to be in town and pick a time when there are none.

Understanding the impressive seafaring past of the city is central to understanding this odd Slavic city. The Maritime Museum is located in the St.John’s Fortress, which was built to protect the old republic’s harbor. The city-state had one of the largest fleets in the world in the 16th century – 180 ships with over 4000 sailors. The museum has a range of exhibits from model ships, sailors’ uniforms and maps, flags of the republic and other navigational equipment, making it one of the most popular Dubrovnik tourist attractions. The museum also has an underground aquarium that houses some of the most exotic Adriatic sea life.

Croatia, and indeed Dubrovnik, has seen its fair share of war with the most recent being the breakup of Yugoslavia in the 90s that prompted a decade of war genocide. The War Photo Limited is a somber display of wartime photojournalism drawn from several modern warzones and you should go here if you ever visit Dubrovnik. The 2018 exhibition by Wade Goddard focuses on the fight for independence of the Kosovo Albanians.

The tiny island, off the Adriatic shore, is a 10 minutes ferry ride away from Dubrovnik. Bursting with cypresses, pines, palms, and eucalyptus, the island is a very popular place for Dubrovnik sightseeing. It has a beautiful rocky shore from where you can see the imposing forts of the Old City. There are also several spots where you can bath and swim. There is an 11th-century monastery in ruins here, and also a villa built by the Archduke Maximilian von Hapsburg.

This beautiful stretch of white sand is only a 10-minute walk from the Old Town. Set across from the magnificent battlements of the Old Town, the beach one of the best places to visit in Dubrovnik. The best times to visit the beach is perhaps June when you are likely to find the least people here. You can rent a tanning bed or baldachins and lounge about in the sun all day. There is also a pretty decent restaurant serving seafood.

A must-do when you are Dubrovnik is to take the cable car to the highest point in the city called Mount Srd(elevation 415 meters) that lies just behind the Old City complex. The cable car’s two carriages leave from the lower level station that is just outside the Old Town area. From the top, you can see the Adriatic Sea, the Old Town and also the Dalmatian islands. The ideal time to come here is sunset, and you can get a lot of photos.

The Elafiti islands of Lopud and Sipan are best explored with a kayak. You can hire the services of local companies or just rent a kayak and do it on your own. There are plenty of places to swim, snorkel and, yes, kayak on the Lopud island. Also, when in Lopud, be sure to spend some time on Sunj, one of Croatia’s foremost and most pristine beaches. You can catch the ferry to the Elafiti islands in the morning from Dubrovnik’s Gruz port.

Also known as the Bell Tower, the graceful 31 meters medieval tower built in the 15th century is one of the most enduring sights of the Dubrovnik Old Town. Right next to the majestic Sponza Palace, the Clock Tower makes for the most Instagrammable sights of this medieval town-fort and is one of the top 10 places to visit in Dubrovnik. There are two strikers of the bell made in bronze around the bell, called the zelenci, but locally they are called Maro and Baro.

This Baroque Church was built in the early half of the 18th century and is counted as one of the offbeat Dubrovnik points of interest. The church was actually constructed after a Roman church was destroyed in the 1776 earthquake that ravaged the city-state. The portrait of Sveti Vlaho holding a model of Dubrovnik is perhaps the most iconic sights to see in the Church.

The Dubrovnik sightseeing map is dotted with pretty beaches and stunning historical monuments. The city is an incredible place to see during your holiday in Europe and deserves to be seen to be really believed. So, pack your bags and head out to this paradise!

Further Read: Croatia Honeymoon: All You Need To Plan An Incredible Escape In 2022

8 Beautiful Guest Houses In Jodhpur That Will Beat The Blues Of Daily Life!

Places Near Vagamon: 5 Destinations That Are Worth A Visit On Your Vacation

Do Not Miss These 9 Places To Visit In Langley If You Are Wishing For A Kickass Vacay!