7 Places To Visit In Kataragama In 2021: To Know The Lankan Town Culture 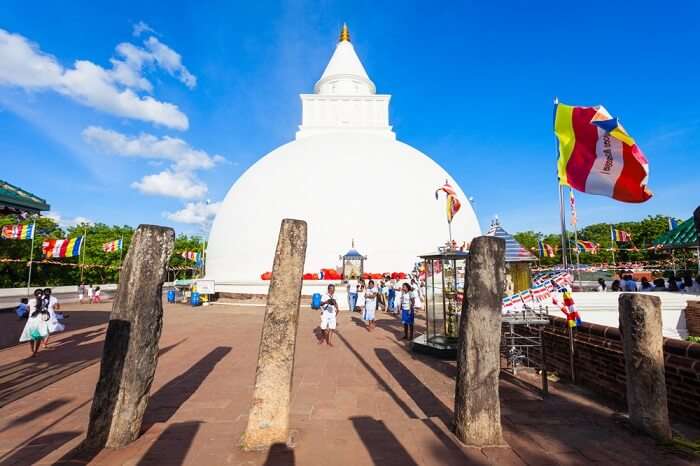 The island nation of Sri Lanka always remains in the limelight for many reasons. Apart from being a fast-growing tourist destination today, this tiny country also serves a great site for religious practices. In fact, some notable sacred places of Buddhism, Hinduism, and a few lesser known religions are located here. The holy city of Kataragama is one such center for religious practices as the renowned pilgrimage town which welcomes the devotees from different religions to delve into the special worships. It is here that sacred places pertaining to Buddhism, Hinduism and also an aboriginal lesser known Vedda faith locate. Read on to find out about the places to visit in Kataragama.

During the medieval period though, Kataragama used to be a tiny village. It witnessed a fast transformation over the centuries. Being a fast-developing urban establishment today, this city still remains a great option for vacationing due to its strategic location surrounded by heavy forests in the country’s south-eastern region.

Top 7 Places To Visit In Kataragama

Out of the many notable places to visit in Kataragama, Sri Lanka, we enlist here the top 7 popular ones. This listicle adds popular places to make you abreast of region’s venerable history as well as modern developments. These places are the best entertainment options as tourist spots.

Besides visiting the sacred sites to re-impose faith on respective religions, many tourists like to delve into outdoor activities during Kataragama visit in Sri Lanka. Daya Safari Jeep Service is the ultimate choice for this purpose to explore jungles here. Luxurious safari jeeps and well-informed guides turn jungle tours truly mesmerizing. Travelers get an opportunity to spend quality time in the popular tree houses through Daya Safari. One can feel the closeness to nature. Fine dine facilities and rest comforting options make one’s jungle tour in Sri Lanka once-in-a-lifetime experience.

Must Read: 6 Adventure Places In Sri Lanka To Quench The Thirst Of Your Inner Daredevil!

Suggested Read: 8 Things To Do In Kataragama To Make The Most Of Your 2021 Sri Lankan Trip

Nature lovers and especially those willing to spend some time in the parks in the company of lovely animals can’t miss Tissa Wewa near Kataragama in Sri Lanka. Located near Anuradhapura, this popular artificial lake is worth visiting. The reservoir is a great spot to come close to nature. Built in the 3rd century by Devanampiya Tissa, the primary aim of Tissa Wewa was to ease the supply of water in the nearby region. Current Tissa Wewa embankment boasts of 3.2-kilometer length and 7.6-meter height. The royal gardens in Tissa get water supplied from this reservoir itself. Visitors witness the presence of several rare birds at this place while they spend time here.

Out of the many sacred religious places in Sri Lanka which augur hundreds of thousands of visitors for their arrival to the island nation, Sella Kataragama Temple has its share of contribution too. Built on the Menik Ganga banks, this temple in the tiny city appeals all devotees from worldwide locations. The deity of Kataragama or Skanda Kumaraya is worshipped here by a large chunk of worshippers. Besides its religious value, monuments and nature’s bounties like Valli’s Cave in Sella Kataragama, Ganesh shrine, various Kovils and other Hindu mythological abodes et al make it a sacred temple for the believers of Hinduism. It remains an ultimate place to add in the religious tour itineraries.

The sacred place of eminence, Sithulpawwa Rock Temple is a big landmark in Sri Lanka’s Tissamaharama near Kataragama. This ancient Buddhist monastery is always filled with devotees and is counted among one of the best places to visit in Kataragama, Sri Lanka. Its presence since the 2nd century has turned South-eastern Sri Lanka’s Hambantota District a popular site for religious exploration. Location of this temple at a distance of mere 18 kilometers from Katharagama pilgrimage center makes it easily accessible. Ancient King Kavantissa had built this rock temple on the hills. It today remains one of the popular sites to visit to know several notable things about Buddhism. The paintings depicting the Anuradhapura era ruins beside stone idols of Buddha and images of Bodhisattva et al are worth exploring in this monastery.

Nature lovers can hardly miss the Yala Safari to spend good times in and around the Yala National Park of Sri Lanka nearby Kataragama. An expert team of guides is involved to make the Yala National Park visit a memorable one for visitors and to remember their park tour for the lifetime. The safari tour is awesome and best of an adventure trip while travelers are shown the leopards and several other beasts such as elephants, sloth bear, wild boar, spotted deer, mongoose, land monitor, wild buffalo, sambar deer, and jackal to name a few from close proximity. As Yala National Park is the world’s only park which boasts to have the highest leopards’ density, tourists enjoy touring here under expert guidance.

There is no dearth of amazing places to visit in Kataragama and now you have so many options to prepare an amazing itinerary. Ensure that the above-mentioned additions are there as a customized choice. You can cover the most of Kataragama in your Sri Lanka tour through these additions. So, book your trip to Sri Lanka with TravelTriangle and have an exciting time exploring this beautiful place.

Frequently Asked Questions About Places to Visit in Kataragama

Is it safe to travel in Sri Lanka after the outbreak of covid 19?

Yes, now it is safe to travel to Sri Lanka.

Who has built Kataragama?

What is special about Kataragama festival?

This is the full moon festival held year in the month of July or August. The usp of this festival is exciting act of ‘treading the flowers’where the worshipers are asked to walk on the beds of red-hot cinder. This act depicts fulfilling of vows.

In which province Kataragama is located?

The places located in the Uva region of Sri anka.

How to reach from Kataragama to Colombo?

It can be commuted by following two routes and these include:
1. The tourists can take trains from Fort Station to Beliatta Colombo.
2. The travellers can take a taxi from Beliatta to Kataragama station.

What is the distance between Colombo to Kataragama?

The distance is 174 kms from Colombo to Kataragama.

Who is God Kataragama?

Kataragama Deviyo is believed to the guardian deity of Sri Lanka.

Where is Sri Lanka?

Sri Lanka is situated in the Southern Asia, the Southeast coast of India.