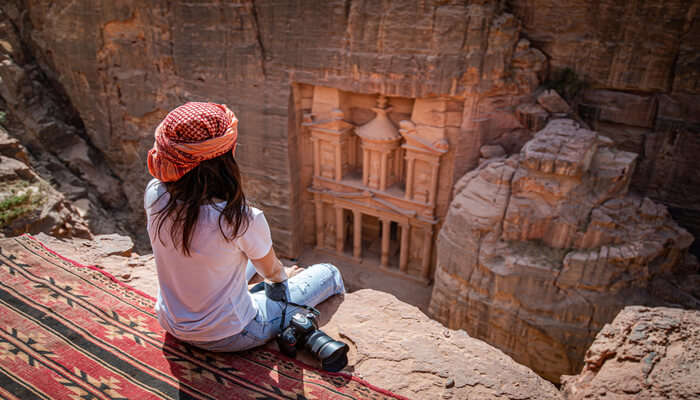 If we said there is a city that was influenced first by the Nabateans, then by the Romans and then was rediscovered by a Swiss explorer named Johann Ludwig Burckhardt, will you believe it? Well, if you don’t then Petra is a city which is being talked about. The city which in 2008 became one of the “New Seven Wonders of the World” has been inhabited since prehistoric times and is half carved into rock and is half built and who wouldn’t want to visit such an interesting destination?! There are many fascinating places to visit in Petra and here you just cannot go wrong. The city lying between the Dead Sea and the Red Sea is also known as the “Rose City” and is home to many caves, temples and tombs.

You wouldn’t want to visit Petra during summer unless you want to explore some of the best places to visit in Petra in the stifling heat. The best time to visit Petra is during Spring which is from May through September or during the fall months which for Petra are from September to November. The temperatures range between 18 degrees Celsius and 25 degrees Celsius and the weather is very pleasant.

Situated between the Dead Sea and the Red Sea the spectacular “Rose City” is half carved and half built and was originally known as Raqmu. Built in the 6th century BC the city is home to many popular tourist attractions and a UNESCO World Heritage site too. Without further ado, let’s get to the many exciting places to visit in Petra.

As-Siq or Siq is a mystical corridor that leads to Petra. Siq when translated to English means ‘shaft’ and was formed when a mountain broke into two due to tectonic forces. A walk through this corridor will be nothing less than magical and with walls towering over your head it will be slightly scary too. But it’s all worth it as As-Siq is one of the most important and best places to visit in Petra.

Must Read: Petra Caves In Jordan: A Rose-Red City Half As Old As Time

If you are someone for whom a trip is incomplete without undertaking an adventure then hike to Al-Deir Monastery in Petra which is one of the most phenomenal places to visit in Petra, Jordan and you will be surprised to see how well preserved the place is. Not just that you can enjoy some delectable delicacies here with a view. If you prefer eating healthy then try out a cup of freshly squeezed pomegranate juice and you will be so delighted.

Suggested Read: Dead Sea, Petra & The Sands Of Time: Our Family Trip To Jordan Was Larger Than Life!

You have to see it to believe it. If that is how you roll then the Colonnaded Street is one of the places to go in Petra. Built somewhere around 106 AD the street depicts the Roman influence on the city. Following the standard pattern of the typical east-west oriented decamanus, the Colonnaded Street has shops on both sides and you can’t miss this one.

One of the most famous Petra attractions, the Al Khazneh is believed to be the most elaborate and extravagant treasury in Petra. Light to darkness is what exploring the place will feel like but we bet you will feel enlightened when you come out. Al Khazneh means ‘The Treasury’ when translated and is one of the most beautiful and peaceful places to visit in Petra.

Ever heard of interesting burial places? If you have, great! If not, then Petra has one and you should visit it as soon as you can. Time and erosion has affected it severely and the place has somewhat lost its charm but the place is still an important site. Built originally for Nabatean King Malichus II in the 1st century AD, this place was made into a church some 400 years later and then into a tomb.

Suggested Read: Shopping In Jordan: Buy All That Is Distinct And Quaint In The Country Of Jordan

A 76 foot structure that is believed to be the most important temple in Petra is still very much alive and one of the most fascinating places to visit in Petra. It is confirmed that the walls of Qasr Al-Bint were once painted in bright colours and were embellished with the carvings of the busts of many gods. The Qasr al-Bint is the only freestanding building in Petra and one of the most important Petra attractions.

Suggested Read: Scuba Diving In Jordan: A Never Miss Out Experience For Everyone!

Built in the 1st Century AD by the Nabateans, the Petra Theater is made out of rock and had the capacity to hold 3,000 people initially. The Romans expanded the theater when they came in and the capacity of the theater increased to 7000. However, there was an earthquake in 363 BC and the theater was damaged and was then further dismantled to build other structures. But it still remains one of the most important places to visit in Petra.

If you want the best views of Jordan then High Place of Sacrifice is the one place in Petra that you can’t miss. One of the most approachable and accessible high places to visit in Petra, Jordan the High Place of Sacrifice is a place you can reach by hiking. If you don’t feel like it, you can also take a donkey ride which will cost you only JD 10 (INR 1015). The place was built atop Jebel Madbah back in the day when animal sacrifices used to happen and there was a need to chanel the blood.

Further Read: Nightlife In Jordan: Experience The Lesser Known Side Of Jordan

The UNESCO World Heritage site, Petra which is one of the “New Seven Wonders of the World” since 2008 is a site to behold and a place that must be on your bucket list if you love exploring history and more so if you love adventure. If you are convinced that this is the place where you should be headed to, next, then check out these customizable options for a trip to Jordan and plan your trip with TravelTriangle.

Frequently Asked Questions About Places To Visit In Petra

A. Petra is one of the exotic places that is recognized as UNESCO World Heritage sites. Moreover, you won’t have to spend a lot of money to explore this place. Everything together makes the place a great tourist destination to explore.

Q. How many days does one need to spend to explore Petra?

A. It will merely require 24 hours to explore several significant parts of Petra. If you want to explore more, then you can also visit some nearby places.

Q. What is the best time to visit Petra?

A. The best time to visit Petra is during the summer season and the spring season that lasts from May to September. The temperature during this time ranges from 18 degrees to 25 degrees Celsius.

Q. What are the spectacular attractions of Petra?

A. Some of the spectacular places to visit in Petra are Siq, And-Deir, Colonnaded Street, Al Khazneh and many more. You can also visit the places depending on your activity preferences.

Q. How to travel within Petra?

A. As Petra is a very small place, you only need a mode of transportation to reach there like a bus or car, but the best way to explore the place is by walking.

Q. What one should wear on their trip to Petra?

A. Make sure you are wearing something breathable and light. You can go for a sweater or jumper because the nights are often colder.

Q. Will the trip to Petra be expensive?

A. Petra is a very small place so you won’t have to spend a lot to explore the place. The trip will cost you really less in comparison to most of the places.

Q. Is Petra worth visiting?

A. Guides can be very inexpensive and if you split the costs with your travel buddies, it’s very well worth it.

Q. Can you go inside the buildings in Petra?

A. These days, the official info is that Bedouins are the only one who is allowed to live on the site. They used to live in caves on the site, but these days they might occasionally sleep in their local stalls.

Q. How much time should I spend in Petra?

A. You can comfortably see Petra in a day.

Q. What is there to do in Jordan Besides Petra?

Q. What should I not miss in Petra?

A. Here are 6 places in Petra you can’t miss:
1. The Street of Facades
2. The Theatre
3. High Place of Sacrifice
4. The Garden Temple
5. The Tomb of the Roman Soldier
6. The Monastery

Q. How long is the walk in Petra?

A. The long, winding path through Petra’s Siq is 1.2 km long and will take you around 20 minutes if you gun it.

Q. What should I wear to Petra?

A. Pack a pair of light, breathable pants instead (go for lighter colours to reflect the heat). A lightweight jumper/sweater: Nights in Wadi Rum can get pretty cold.