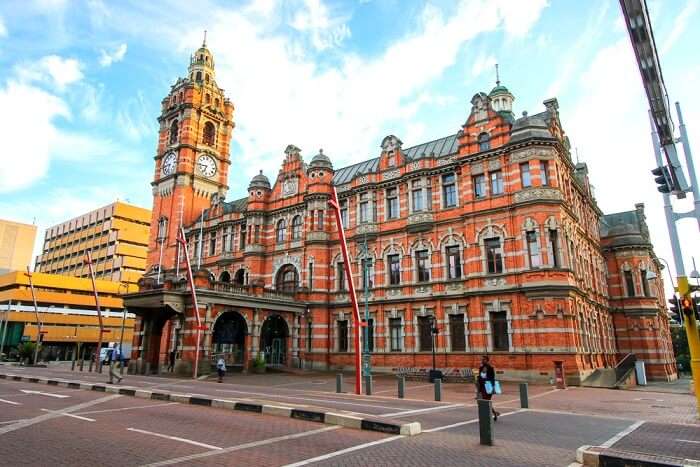 Though its Zulu name uMgungundlovu may loosely translate to “the secret conclave of the pachyderms”, do not let the history of Pietermaritzburg fool you. It is a significant modern industrial hub of South Africa. Pietermaritzburg is that African city of your dreams, the one with the sprawling, breathtakingly vibrant midlands interspersed with forested, rolling hills, complete with a city which still retains its Victorian charms. In fact, it is one of the best-preserved Victorian cities in the world. Listed below are the top places to visit in Pietermaritzburg.

Best Places To Visit In Pietermaritzburg

For those with wanderlust in their hearts, Pietermaritzburg is a convenient stop to set up a base and explore the KwaZulu-Natal.

Image Source
Howick Falls are located in Howick outside Pietermaritzburg and provide a spectacular view. The falls are about 95m in height, about the same as the famous Victoria Falls of Zimbabwe. The Howick falls can be dated back to the time the first man wandered the KwaZulu Natal plains. If reputation and hearsay are to be believed, this region has remained unchanged for the last 300 centuries.

Though these falls on the Umgeni River may not boast the inclusion in the list of tallest waterfalls, they can provide some interest to those morbidly inclined. Since 1851, about 40 deaths have been recorded here. Although most are ruled as suicides, this place is also famous for notorious, historical murders! In spite of the scandals surrounding them, the deafening roar of the water as it rushes in Howick falls, viewed from a deck which is ideally located, can instill a pang of mysticism in even the most hardened of souls. Shops which sell local handmade crafts are ever-present on the viewing platform if one wishes to bring back a souvenir.

Image Source
In need of a much-needed break in the arms of Mother Nature? The Bisley Valley reserve, sprawling to around 350 hectares of good old African grassland and savanna has you covered. There is another added surprise. No entry fees! There are many sites to set up your well-deserved picnic, or just follow the trail which is designed just for that bird lover in you.

Your trail will lead you to two bird hides. At the Pamela Reed Hide, if lady luck smiles on you, you may see the fan-tailed widowbirds, the black flycatchers or even the elusive thick knee hoopoe. In the dense woodlands, you may have to rely on your auditory senses to hear the emerald cuckoo and the African boubou. The dam acts is an attractive watering hole for various species of birds like the Grebe, rush warbler and African black duck. If one is fortunate enough to arrive at the reserve during summer, one may get a glimpse of whydahs and the widow finches. The limelight, however, is stolen by the Tchagra and the booted eagle.

This statue, on Church Street, depicts the Indian revolutionary leader Mahatma Gandhi, who was known to have started his movement of ‘Satyagraha’ or passive resistance after experiencing apartheid in South Africa. The statue is a bronze cast and depicts the Indian leader in a dhoti with his famous staff in one hand, the other extended out as though demanding peace. It marks the memory of his forced removal from a white-only compartment in 1893. Perhaps not as scenic as the other sites on this article, but it is a good place to reflect upon one of the great turning points in history, an event which shaped two countries which were divided by distance, yet united by a single idea of equality.

Forget the excellent facilities and the 550-meter racecourse. The Scottsville Racecourse is most famous for being the setting for the 2005 movie Racing Stripes, which tells the story of a racing zebra. If you have that extra dough burning a hole in your pocket and horse racing sets your blood rushing, this is the perfect place for you! Scottsville has all the modern facilities shaped for your comfort. Enjoy a picnic in an enclosure or even in a restaurant while enjoying atop class race. Wish you luck!

The Maritzburg Golf Club features an eighteen-hole course of green, rolling hills. It also stands as one of the oldest golf courses of South Africa. The course is challenging but enjoyable and informative. Do not sweat if you are not an expert golfer. The course caters to all levels of players, with bunkers to catch your wayward strokes.

Though religious experiences in a foreign country may seem cliché, do pay a visit to the Habibiasoofiemasjied just for its fascinating history. The mosque was built by the Sufi saint Soofie Saheb. It was one of the 11 built by Shah Ghulam Muhammad Siddique (Soofie Saheb), who was ordered by his master the great Sufi saint Khwaja Habib Ali Shah to propagate Islam to South Africa. When he died his wife continued the spiritual practices, after which her son and grandson took over and serve the community today.

Alexandra Park is a hub of activity during warm evenings when many can be seen strolling, jogging or cycling through the gardens, which are lined by magnificent roses. The Oval Craft Market is hosted on a Sunday at the cricket oval, which also serves as the honorary headquarters of the KwaZulu Natal Inland Cricket Union. Art in the Park and Cars in the Park, famous for their display of vintage cars which will turn you nostalgic, are another two annual highlights of the park.

Image Source
For the lovers of flora, the Pietermaritzburg Botanical Gardens, established in 1870, present a selection of seasonal blooms and lush vegetations. The main purpose of the gardens was to instill a sense of conservation and love for rare, uncared plants of the South African valleys. The gardens are also famous for the bell tower, where a ship bell from the HMS Princess, the one that King George V used to cross the channel in 1918 can be found.

9. The Valley of a Thousand Hills

Image Source
Despite the dramatic name, the landscape of this vast inland, carved by the mighty Umgeni river is beautiful rather than dramatic. Hills as far as the eyes can see transverse the land. This area has played a major role in King Shaka’s administration and creation of Zulu. Many battles between the Boers and British were fought here. The battlefields can be visited to remind tourists and locals of the bloody past of the British acquisition of Zulu.

Further Read: Don’t Miss These Food Festivals In South Africa If You Call Yourself A Foodie

Pietermaritzburg is a city which though urban, still retains that wild soul of Africa. We hope that the end of this article finds you trying on that safari hat of yours! Book your trip with TravelTriangle and check out these places to visit in Pietermaritzburg.

Frequently Asked Questions About Places To Visit In Pietermaritzburg

Q. What is Pietermaritzburg best known for?

A. Pietermaritzburg is known as the “City of Flowers” for its azaleas and roses and because it is the site of one of the country’s National Botanical Gardens. Butterflies for Africa, a butterfly conservation centre, is also in Pietermaritzburg.

Q. Which are the best places where kids can have an amazing time?

Q. How much time will it take to reach Durban from Pietermaritzburg?

Q. Which are the top-rated restaurants that offer the best local cuisine?

A. There are several restaurants in Pietermaritzburg where travelers can enjoy the authentic taste of the local cuisine. Some of the best ones are:
1. La Vitae
2. Quincy’s Café and Restaurant
3. Tandoor
4. Mugg and Bean
5. Jayz Grill
6. Olive & Oil Pietermaritzburg
7. El Sombrero Spur Steak Ranch
8. Sagewood Cafe

Q. What time is ideal for visiting Pietermaritzburg?

A. In Pietermaritzburg, the wet season is warm and partly cloudy and the dry season is comfortable and mostly clear. Over the course of the year, the temperature typically varies from 42°F to 82°F and is rarely below 36°F or above 90°F. Based on the tourism score, the best times of year to visit Pietermaritzburg for warm-weather activities are from early March to late May and from early August to mid September.

Q. What are the timings of Habibia Soofie Masjid?

A. Habibia Soofie Masjid opens at 5 am and closes at 10 pm.

These 12 Best Places To Visit In Daman Will Surely Make You Fall In Love With This Coastal City In 2020!

23 Largest Zoos In The World Where You Can Spot The Rarest Fauna And Have Ultimate Fun In 2020!

Greece In November: A Guide To Explore The Ancient Site In A Pleasant Weather!