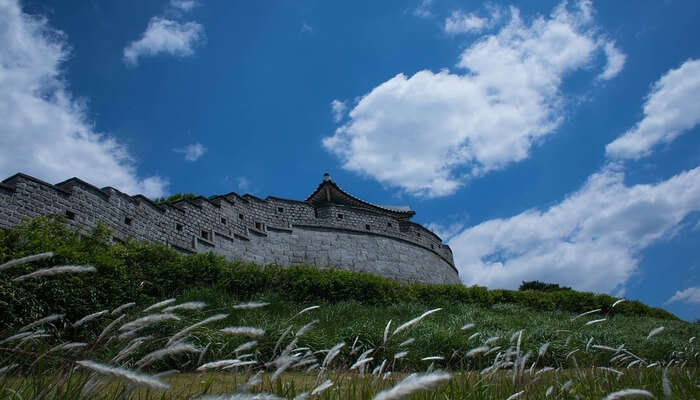 A country in Southeast Asia, South Korea is famous for its green hills, ancient Buddhist temples, sub-tropical islands, fishing villages, and high-tech cities. South Korea is a military giant and shares world’s one of the most heavily militarized borders with North Korea. South Korea is an extremely homogeneous country in the sense that most people in this country identify themselves as Korean and speak the Korean language.

Suwon is a metropolitan city of South Korea that is a suburb of the country’s capital city – Seoul. There are various places to visit in Suwon that one can explore while holidaying in South Korea. While Seoul has a vibrant city life and is full of hustle and bustle, Suwon is a quieter city and perfect for those who want to experience South Korean city life but do not want to be overwhelmed by its bustling city life. Suwon is the only city in South Korea that has retained its historic city walls and is the global research and development hub for the multinational conglomerate, Samsung.

6 Places To Visit In Suwon

Suwon is definitely a must-visit when vacationing in South Korea. It is a great place for sightseeing. Below is a carefully curated list of the 6 best places to visit in Suwon:

If you are someone who likes to visit places of historical and architectural importance, Hwaseong Fortress is the place for you. Also known as Suwon Hwaseong, this fortress was built by King Jeongjo for facilitating a move of the capital from Seoul to Suwon. Hwaseong Fortress was declared a UNESCO World Heritage Site in 1997. Three events, namely Weekend Performance, Martial Arts Performance, and Royal Guards Ceremony regularly take place in the fortress. These performances are organised in the square in front of Haenggung. The fortress has 3 passenger cars and a power car in order to make it convenient for the people to tour around the fortress.
Location: 1-2 Jangan-dong, Paldal-gu, Suwon, Gyeonggi-do, South Korea
Hours of operation: Open daily, 24 hours

Must Read: 6 Places To Visit In Seoul For A Spellbinding Trip To South Korea In 2022

Suwon World Cup Stadium is perhaps one of the best places to visit in Suwon, South Korea for all the football enthusiasts out there. Three matches of FIFA Confederations Cup 2001 as well as four matches of FIFA World Cup 2002 were hosted here. Also known as the Big Bird, the stadium has been home to K League 1 football side Suwon Samsung Bluewings since 2001. The capacity of the stadium is 43,959.
Location: 310 Woldeukeom-ro, Uman 1(il)-dong, Paldal-gu, Suwon, Gyeonggi-do, South Korea
Hours of operation: Open daily, 10 AM to 5 PM

Suggested Read: 8 Highly Interesting Things To Do In Seoul For A Trip To South Korea In 2022

One of the two significant reservoirs of Suwon is Baegun Lake at the foot of Baegunsan. The lake is full of hiking trails, restaurants, and local stores. There are also places to visit and things to do near the lake. One can witness horse riding, visit the theme park and explore the nearby library and the museum. There are several restaurants near the lake that specialize in Korean, Japanese and Thai cuisine.

A large public park, Manseok is home to a man-made reservoir in the centre which is surrounded by a 1200 m track used for walking, running, skating, and cycling. There is a permanent stage on the side of the park that hosts various events and celebrations every year. The park is also known for Suwon Arts Centre. Manseok Park is even a paradise for sports enthusiasts. The park has 12 clay courts of the North Suwon Tennis Club, a full size dirt soccer pitch, a high-quality astro turf soccer pitch and the Suwon X-games skatepark which was opened in 2004.

During the 2002 FIFA World Cup, big screens were put up in Manseok that screened live World Cup matches and the park became the World Cup Park. Also, the park hosts the Suwon Galbi Festival every year in June and has a number of restaurants as well as bars serving Korean food and drinks.
Location: 434 Songjuk-dong, Jangan-gu, Suwon, Gyeonggi-do, South Korea
Hours of operation: Open daily, 24 hours

A Korean architectural peculiarity, Suwon First Church is one of the best places to visit in Suwon city. The uniqueness of this church is that it is entirely made up of black bricks. It is a 10-story building established on the top of a hill.

Gyeonggi Arts Center is perhaps one of the best places to visit in Suwon, Korea for art enthusiasts. Gyeonggi Arts Center regularly holds shows, performances, and art exhibitions. Performances in the field of theater and music are also held. The art center is not only a platform for performances but also an educational institution. It encourages education in the arts and holds regular classes for students.

Further Read: 28 Stunning Places To Visit In South Korea In 2022

Frequently Asked Questions About Places To Visit In Suwon

Is Suwon an ideal destination for a family vacation?

Yes, Suwon has a lot to offer for families coming from all over the world. There are several ways they can make their vacation a perfect one. They can either go to various tourist attractions, try out cuisines at several restaurants, and can also go on a shopping spree.

What is the best time to visit Suwon?

The ideal time to visit Suwon is from March to May. During this time, you will witness a delightful weather and you will be able to make the most of your vacation. Apart from this, you can visit Suwon in Spring season as well.

Which are the best places in Suwon for shopping?

There are various places for shopping in Suwon where travelers can enjoy a shopping spree. Here is the list of the best markets: 1. Insa-dong 2. Lotte World Tower 3. Artbox 4. Seoul Folk Flea Market 5. Myeongdong Market

Is Suwon safe to visit?

Yes, Suwon is quite a safe destination for travelers. The locals here are very warm and welcoming. However, it is recommended that one should not go to secluded areas to avoid any mishap.

What is Suwon best known for?

Suwon is known as a tourist spot where Korea’s history can be seen prominently. There are various cultural sites where travelers can visit to enjoy a great time. Moreover, Suwon is touted as the only entirely walled city in South Korea which makes it as great tourist spot.

How far is Suwon from Seoul?

Suwon is located approximately 31 kilometers from Seoul. Additionally, you can travel by train which will take about 25 minutes.

10 Breathtaking Places To Visit In Oman That Are Pure Architectural Masterpieces!

Places To Visit In Wisconsin: 10 Places You Must See In This State Labeled ‘America’s Dairyland’

10 Iconic Places To Visit In Kusadasi On Your Turkey Trip

Shopping In Canada: To Get The Best Of Everything In The Land Of Maple Syrup

An Ultimate Handy Guide To Explore The Paradisiacal Views Of Saunders Island!