Of Beaches, Romance, And Sizzling Chemistry: Honeymoon Trip To Goa 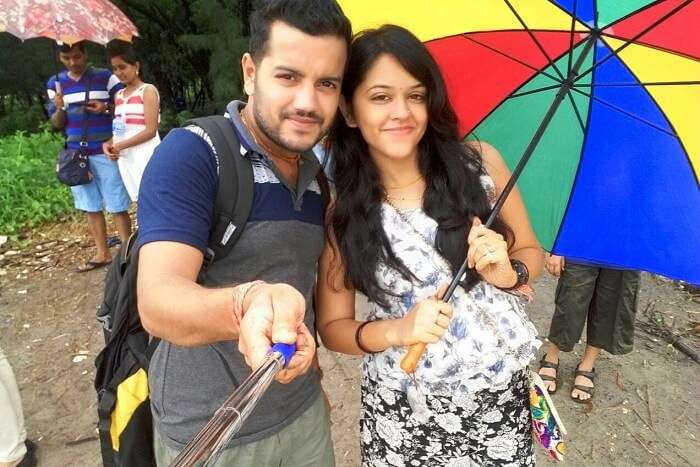 They say the wind and the tide can restore a man’s faith and this is exactly what happened when Rahul went for his honeymoon trip to Goa. Their spontaneously planned trip restored his faith in the goodness of nature and convinced him that God always has a wonderful plan for everyone. He booked their honeymoon package to Goa via TravelTriangle for INR 17000 and it covered their transfers, accommodation, sightseeing, and meals.

I was looking for a destination in the hilly regions of North India for my honeymoon but since the monsoon season was in full force, I was advised against my endeavours. Exploring other options, my wife and I eventually came to a unanimous decision to visit Goa – the party capital of India.

This was going to be our first trip together and we were now more than excited for our honeymoon.

While I was searching for honeymoon packages to Goa, one of my friends recommended me to check TravelTriangle for packages since he had had a good experience with his trip to Himachal.

So, after I had logged into the TravelTriangle mobile application, I submitted a trip request for Goa and was soon contacted by a travel representative from TravelTriangle who understood my requirements and subsequently connected me to local agents on board.

I chose ‘Shoes On Loose’ as my travel agency since they provided me with the best possible package and customization. Soon, we were all sorted when it came to our honeymoon package to Goa and were now eagerly awaiting the trip date.

Our vacation was to begin with a long train journey from Bhopal to Goa.

So after enduring a 24-hour long train journey, we got off at the Thivim railway station. This station was a mere 30 minute drive from our hotel booked in Calangute. At the railway station, a driver from the hotel was already present to receive and transfer usl.

We reached our hotel by 10 PM and post check in, soon called it a night, so as to be energetic for the next day.

We woke up early next morning, had a delicious breakfast, and got ready for the South Goa Tour by 9 am. The tour started with a cruise called ‘The Filmy Chakkar’ and was an hour-long ride that took us to multiple tourists spots around Goa where Bollywood movies had been shot.

Afterwards, we got a chance to take some blessings from the almighty in the famous Manguesh Temple. Next was the Dona Paula Bay where we were enchanted by the beautiful coastal view and the gusty winds that blew all over.

We wound up the South Goa tour with a trip to the Aguada Fort. This beautiful lighthouse which was built by the Portuguese in the 17th century stood tall and imposing – offering us a glimpse of the past.

We were dropped back to the hotel at around 9.30pm after which we straightaway went to sleep to relieve ourselves of all the tiredness.

We got up early this morning and were in a pleasant and vibrant mood. I guess the easy-going and relaxed nature of Goa was having a positive effect on us.

The day began with a North Goa tour at 9 am. We were especially excited for this trip since North Goa is well known for the commercial impact it has had on the world over centuries. A key trading port in the past, and now a happening shopping centre for tourists and locals alike. The colorful and vibrant street shopping scene here added to Goa’s charm.

After lunch, we visited the beautiful Anjuna & Vagator beaches in North Goa. It was pleasing to walk on the beach here since the waves were hitting my feet.

The next day in Goa was a leisure day for us. We took full advantage of the time at hand as we woke up and had breakfast at a typical slow-sunday pace. Later on, we decided to rent a scooter and ride around the streets of Goa exploring whatever hidden gems we could find in our way.

We started by covering the Miramar, Baga and Calangute beaches. Despite being the monsoon season, the party atmosphere in Goa was fully visible and vibrant.

My wife and I had a lovely time taking pictures on the beach and having leisure rides alongside the western coastline. Later on, we visited the city of Panaji to do some shopping.

Unfortunately, most of the markets in Panaji were closed on Sunday. That meant, shopping for us was pretty limited on that day. Cruising around the streets of Panaji made me realize how different the city was from the rest of Goa. Panaji was more like a city, whereas the rest of Goa along the coastline was more leisurely and tourist centric.

We returned to the hotel at 9 in the night, and called it a day.

Suggested Read: Goa Trip: When In Goa, Do What The Johars Did

The final day of our honeymoon trip was upon us. We woke up and had a delicious breakfast. Since our train back to Bhopal wasn’t until 3.30pm, we had some time on our hands to kill. So we went to the markets of Panaji which we had found closed on the previous day.

A taxi was present at the hotel at 1pm to drop us to the Madgaon railway station. We bid goodbye to Goa, its beaches, and the charming architecture with a sad heart.

Our trip to Goa was an awesome one and we had a blast celebrating the goodness of nature and taking in the party ambience on our honeymoon. It is true when they say “Some on the best plans in life are made spontaneously” since this trip was surely one of them

Party like crazy in Goa! Experience fine nightlife and amazing culture! Enjoy a romantic holiday amidst nature and ocean! Book your package now!

Shopping In Goa: 18 Things You Must Buy When Exploring The Tourist Paradise In 2021