10 Major Rivers In Australia: The Lifeline Of The Land Down Under 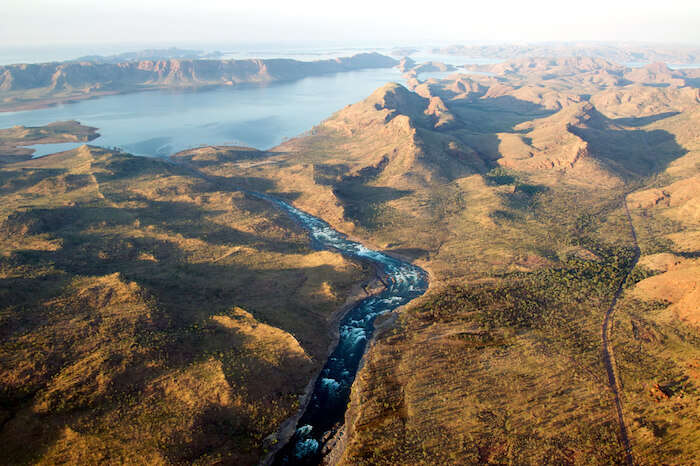 The Australian continent is popular for the quantity and quality of beaches it consists of. And while these beaches are amongst the best beaches in the world, Australia also consists of some of the most beautiful rivers that are located at various parts of the country. Rivers in Australia are plenty in number, with the occasional cruises being held on these rivers.

This article presents you with some of the best rivers in Australia that you can visit on your trip to this fascinating country. Take a look at the list:

One of the major rivers of not just the country, but the Australian continent, this beautiful river flows through the states of Queensland and South Australia. Flowing for over 1300 kilometers, it is also called as the Barcoo river due to its right tributary. The Cooper Creek is amongst the three most significant rivers that flow into the Lake Eyre basin. It is also the second longest inland river system in the Australian continent.

Flowing between Port Douglas and Cape Tribulation, into the splendid coral sea, the Daintree river can aptly be attributes as one of the most densely populated mangrove estuaries in the world. The river also boasts of being the only place displaying a merger of the rainforest and the reef, on our planet. Home to an ecosystem consisting of 150 fish species, 100 crustaceans as well as consisting 30 of Australia’s 38 mangrove species, the Daintree river has become a popular tourist destination over the years.

Where: Within wet tropics of Queensland, Australia.

Flowing through New South Wales, Victoria and South Australia for a whopping 2520 kilometres, this is the longest river in the continent, while it is the third longest navigable river in the world. Visiting the Mungo National Park, a UNESCO World Heritage Site, is one of the most popular activities that tourists indulge in, along this river. It also hosts the world’s largest canoe race every year. Home to four dams and sixteen storage weirs along its banks, this river is the primary source of water supply for around 1.5 million households.

A major perennial river in the Franklin-Gordon Wild Rivers National Park, Gordon River flows for over the course of 172 kilometres. Proudly nesting in the Tasmanian Wilderness World Heritage Area, this river is the perfect summer destination for a cozy getaway with friends or family. Tourists can indulge in activities like rafting or canoeing while there are also daily cruises every day that take you through the river’s dense forests.

Situated in the Cooloola region of the Great Sandy National Park, the Noosa River is a spectacular river that enters the Pacific Ocean at Noosa. Kin Kin and Teewah Creeks are the two main tributaries on this river. Tourists can indulge in a variety of water sports as well as cruises here. Lakesides of several lakes on this river provide excellent camping sites that are also popular destinations for family picnics and summer getaways.

Rising in Tasmania’s Central Highlands at Lake St Clair, the Derwent River descends 2300 feet over 200 kilometres. Named after the River Derwent in Cumbria in England, this fascinating river is primarily used for boating, marine transportation, industry, and recreational purposes. Various tributaries of this river are also useful in the generation of hydro-electricity with several dams being built on them in the 20th century. The lower Derwent river is the primary source of water supply for Hobart, the capital of Tasmania.

A perennial river in the east-central part of Victoria, Yarra river flows for over 242 kilometres west through the Yarra Valley to the Port Phillip. The Melbourne city was established on the lower stretches of this wonderful river way back in 1835. Initially a significant source of food as well as a meeting place for the native Australians, today the river has busiest container shipment area in Australia.

One of the major attractions of Perth in Australia , the Swan River is a famous river in the southwestern part of Western Australia. With the Avon, Canning and Helena Rivers as its main tributaries, the Swan river’s lower reaches are deep and wide while the upper reaches very shallow and narrow. Tourists can also relax and enjoy in the cruises in this area.

Beginning in the Kakadu National Park and flowing into the Nitmiluk National Park, the Katherine river flows through the town of Katherine and is also a significant tributary of the Daly River. The main attractions of the Katherine River are the red sandstone cliffs of Katherine Gorge, which the river took around 23 million years to carve. Tourists are offered with canoe packages as well as helicopter flights that help them see the beauty of this place more closely. Also, there are various tour companies offering cruises which makes sure that people can relax whilst also enjoying at the same time.

Situated in Western Australia, primarily the Kimberley region, this river is 200 miles or 320 km long. Named after Western Australia’s’ Governor between 1877 to 1880, the catchment of this river covers around 46,100 square kilometers. Kununurra is the main town of the Ord River and is also the centre for the Ord River irrigation scheme. This scheme was responsible for the development of Lake Argyle which is one of the major tourist attractions here.

These are the most stunning and most spectacular rivers in Australia that you must visit on your , trip to Australia. Make sure to indulge in all the water sport activities that these rivers offer and have the greatest time of your life.