10 Picturesque Rivers In Czech Republic Every Nature Buff Must Visit Once In The Lifetime! 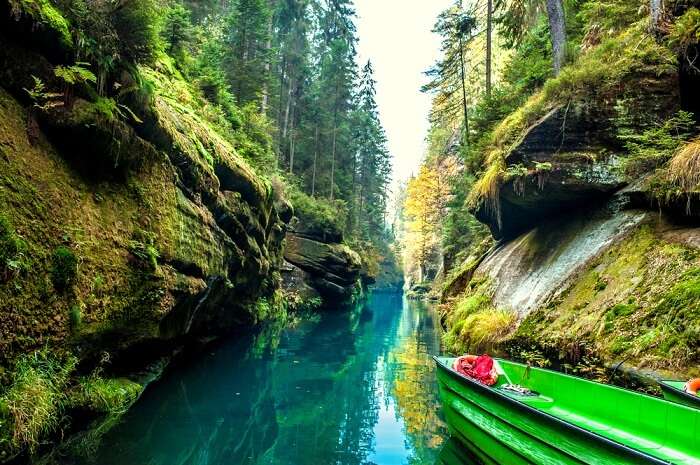 The Czech Republic is a Central European country, famous for its rich cultural history. It is one of the most beautiful European countries, with an abundance of scenic natural beauty. The country is home to many magnificent castles of the medieval centuries that adds to its historical charm. The lovely small towns are really a treat to the eyes. Not to mention the beautiful national parks and the lovely flowing rivers which soothe your senses when you behold them. Prague being the country capital is full of the rich cultural history of the region as well. There are also many major rivers and lakes in Czech Republic that you can visit, especially if you love water bodies.

10 Major Rivers in Czech Republic That You Can Visit

If you are in the mood for cycling around the bank of a beautiful river or simply want to take a stroll near the edges of the water body or in the mood for a boat ride or water tourism, there are some famous rivers in Czech Republic that you can check out. Here is a list of 10 major rivers in Czech Republic that will satiate the wanderlust in you. Check out the list and get ready to treat your eyes with some stunning sceneries, the next time you visit Czech Republic.

The Elbe River also known as ‘Label’ in Czech Republic is one of the most popular river in the country. It originates from the Krkonose Mountain range and flows for about 678 miles to the North Sea in Germany.

In medieval times, this river used to provide trade links between Charlemagne Empire. The river also served as the connecting trading links to Prague in the later centuries. The river comprises of many wetlands and is home to many woodland habitats as well as sustains the wine producing areas of the Bohemian region. The source Elbe, the very stunning mountain range of Krkonose will soothe your senses with the views of ridges, meadows and thermal springs. On the site, you can also see a stone wall consisting of coats of arms of the towns in the Bohemian region, lying along the banks of Elbe. Enjoy the beautiful scenery and absorb the history of the medieval period as you saunter along the banks of the Elbe.

Must Read: The Czech Republic In January 2022: A Mini Guide To Explore This Country’s Magnificent Views

Lying at the south Bohemian region, Vltava is the longest among all Czech rivers. It flows through the north of Prague along with many historical cities on its course. The river on its pilgrimage north is harnessed by many dams which are pretty famous spots for recreation. You can go for swimming in this region, the water is clear albeit it a little too cold. There are also many activities that goes on in the surrounding areas like you can visit Lipno Treetop Walkway, skating park or the bike park where you can enjoy yourself. Vltava River has another dam, Orlik, which lies on the border between South and Central Bohemia.

Oder River is another popular river among other rivers in Czech Republic. It originates in Czech Republic and runs through west Poland and Germany, ultimately merging with the Oder Neisse line, before flowing into the Szczecin Lagoon. There is an excellent cycle route along the edges of the river, which is very suitable for all kinds of trailers. The beautiful meadows along the Oder River and the natural conservation areas are definitely a sight for the sore eyes.

Suggested Read: 10 Best Cottages In Czech Republic That Are All About Beauty And Luxury

The Bobr is actually a tributary of Oder River and flows through the northern part of Czech Republic. The Bobr River originates near a small village named Bobr village, in the south east of Karkonosze Mountain Range. In the middle ages, this river served as the border between Silesia and Lusatia. The river flows through the Bobr River Landscape Park separating the Izerskie Mountains and Kaczawskie Mountains. The valley is famous for its limestone cave that has corridors and chambers up to 136 meters long.

The Ohre River valley stretches from to Karlovy Vary to Loket and is a part of Slavkov Forest Protected Area. There are many marked tourists routes along the river banks, which you can enjoy strolling in. This educational trail offers 12 stops providing you with various geological, archeological and botanical information. Along your trial, you will see many evidences of the oldest Slavic settlement in this area. Although the most distinctive thing that you’ll notice on your tour is the granite rock town, a town formed by rock towers with their distinctive block jointing.

Suggested Read: 9 Fantastic Hostels In Czech Republic For All Backpackers!

The spree is another among the beautiful rivers in Czech Republic. This river flows through Saxony, Bohemia and Bavaria. Here you can see the architectural remains of the medieval ages. Although the river flows through Germany and northern parts of Czech Republic, but the part that cuts in Berlin, is definitely the most impressive one. Here, you can take a boat tour along the river and enjoy the rich architectural heritage of the country. The medieval architecture, both old and new, reflects on the water and the sight is simply breathtaking and the view of the city line from the water is unlike anything you have ever seen. Reaching this location is also very simple as almost every train that leaves from Czech Republic stops in Berlin. So you can hop on a train and go on a day tour to Berlin and enjoy the wondrous sight of the Spree River.

This river rises from the Jizera Mountains and flows through Czech Republic before reaching the tri point with Germany and Poland. It is another left bank tributary of Oder River. The embankments along the Lusatian Nessie is filled with green meadows lined with pine trees and large yellow fields. If you are cycling along this beautiful place, you will be filled with a beautiful, breathtaking dose of nature as you find yourself unwinding in this tranquil spot.

Suggested Read: Shopping In Czech Republic: To Add A European Touch To Your Wardrobe

White Elster originates from the south western part of Czech Republic and finally flows through German states of Saxony, Thuringia and Saxony-Anhalt. White Elster offers a very stunning river landscape to the people who visit the river banks. Along your tour of the river you will come to see many centuries old architecture, which is simply awe worthy. If you wish, you can also go on motorboat tours along the river.

If you are willing to see the Olomouc region from a different vantage point, then head to the Morava River for an amazing boat trip. A guided river rafting trip offers some stunning views of the city. You can also cruise around the natural meanders of the Morava River and enjoy many scenic views as well as the stunning medieval architecture.

Location: Near the borders between Czech Republic and Poland.

The Thaya is the longest among the tributaries of Morava River. The Narodni Park Podyji that lies on the Czech side of the river, is filled with stone rocks and lakes of a unique geomorphology. You will spot a huge variety of plants and animals in this region. It is one of the least affected and best preserved river valley in the entire Czech Republic. If you want to enjoy an unbridled nature you should definitely head here to soothe your senses.

Further Read: 3 Days In Prague: For An Enthralling Holiday In This Scenic City Of Czech Republic!

So, if you’re craving for an escape to the woods, then these 10 rivers in Czech Republic will give you the chance to capture the best views. And also don’t forget to plan your holiday to Czech Republic in the best possible way with TravelTriangle.