Prague Castle In Czech Republic: An All-Inclusive Guide To A Fairytale Palace 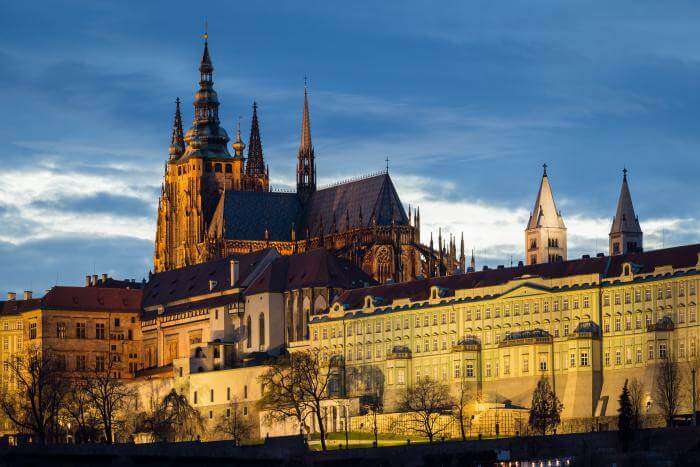 The first expression that comes out when seeing the city of Prague is ‘wow’. But this expression will become more intense after walking the paths of the Prague Castle. Situated in Prague, Czech Republic, this complex structure stands as the largest ancient Castle in the world according to the Guinness Book Of World Records and is now the official workplace of the presidency of the country.

A place filled with wonder and excitement, with spooky stories and charm, this place is the perfect gateway to fulfill your desires of exploration.

Each wall, each nook, and corner of the Castle has something to speak for themselves. The Castle began being built in 870 and got completed in 1929 and has seen many rulers such as the Bohemian Emperors and the Holy Roman Emperors since then. It has imbibed many architectural styles of the Bohemian and the Roman Empires and also taken inspiration from the Modern Era.

After the times of the empires and rulers, the Castle soon became an official platform for the presidencies of the country and was also one of the main headquarters under Nazi Germany. Rumour has it that the Castle still guards the Bohemian jewels and crowns in a hidden and locked up the room. It is said that anyone who puts upon them the Bohemian crown is doomed to their death within a year’s time. Call it bad luck or the fate of the cursed crown, during the Nazi occupation in Prague during World War 2, Reinhard Heydrich fancied the much famous crown and wore it for an entire night.

Within not even a year, Heydrich was wounded during Operation Anthropoid after which he died of infected wounds a week later. The entire Castle proudly holds the authority of several evangelical churches and magnificent Castles where each painting speaks a thousand words.

Must Read: 5 Gorgeous Annual Festivals In Prague That’ll Make It Your Favorite City In The World

Prague Castle On A Map

Prague Castle Opening Hours: 9am-7pm. This timeline may vary according to the seasons so do check up your timings well beforehand.

What To Do In Prague Castle

This Castle is so huge that to cover it entirely can take a minimum of 2 days. But make sure that when in the Castle area, there are few ‘must do’ things –

The churches age back to as far as the 9th century. Their beauty and calling architecture has never failed to attract tourists from all around the world. But a piece of advice will be to always take up a guide who can help you with the ins and out of the buildings and who can give you a more accurate picture of the history of entire Europe. Out the many, St. Vitus Cathedral ,St. George’s Basilica, St. George’s Convent, All Saints Church and Holy Cross Chapel are the most famous.

Suggested Read: 6 Unique Museums In Prague That Will Draw You Towards The Enticing City!

From the Bohemians to the present day President, all have made their significant and yet luxurious ramifications on the pre-existing structures as well as have constructed new bodies. Not visiting them can be actually counted as a haunting sin. So again, with the help of a travel guide who knows his/her history well, do visit the –Old Royal Palace, the Lobkowicz Palace, the Beveldere, The German Embassy and also the New Royal Palace.

3. Waltz in the Halls

Image Source
During its entire span of construction, many reigns and empires have ruled over Prague and to leave behind their marks of the aristocracy. Since it’s a Castle of the old times, it is bound to have huge halls. These were either places of discussions or ballrooms, or even just simple halls for family gatherings. Rudolf’s Gallery, Column Hall, Spanish Hall, Rothmayer’s Hall and Vladislav Hall are a few of the site’s remarkable halls

Suggested Read: 10 Incredible Things To Do At Your Bachelor Parties In Prague

4. Go High Along the Towers

Towers can be scary and towers can be beautiful as their beauty and architecture cannot be described in mere words. It depends on the person climbing it and slightly on the history as well. White Tower, Black Tower, Dalibor Tower and Mihulka usually attract most of the crowd. But you are most welcome to explore the rest as well.

5. Stroll in the Gardens

Europeans have as such always held quite a lot of interest in gardening as well as gardens. Whether it is Napoleon Bonaparte or Hitler, their manner and demeanour never struck away their love for a bit of greenery around. There are many green spots around the Castle. A few are-Royal Garde of Prague Castle, the Hartig Castle, Garden of the Ramparts and many more.

Where To Find The Guides

Since it’s a hotspot for tourists from all around the world, there are many guide agencies as well as individual Prague Castle guides with whom you can hook up if you want to brush up your history and explore every corner of the Castle. One should be easily able to find them around the entrance of the Castle.

With the vast influx of different people with different languages, such agencies and individuals prep themselves up with many languages on their fingertips, so that you don’t miss out on the slightest of the details. And also because of the flourishing technologies, they sometimes also provide you with language converting devices so that you don’t feel left out.

It’s one thing to go to the atypical destinations of the world and another thing to pay your visits to these magnificent sightings. So if you believe in walking through history, plan out a trip to the Prague Castle and make your trip to the Czech Republic, an experience of a lifetime.

Manali Vs Dalhousie: Choose Your Winter Or Summer Escape Wisely!

Top 8 Waterfalls Near Kodaikanal That Leaves The Jaws Dropped To The Ground!

11 Picturesque Picnic Spots Near Ujjain Where You Can Experience Both Adventure And Solace In 2021!