7 Bullets Narrating Our Tales Of Ladakh 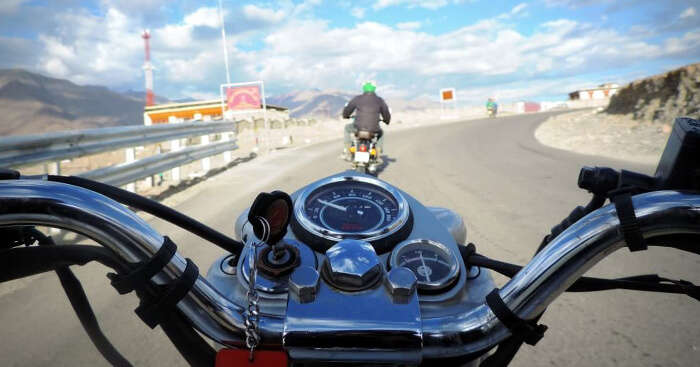 The first few minutes of the halt and the silences were violated by strange noises. We tried to ignore them until they grew increasingly violent. While we still held our grounds, a loud shriek echoed through the valley. It was Aditya — struck by an intense stomach ache with his tongue and eyes turning red. Cold shivers ran down our spine. Senses were numbed. Time, stopped.

It was just a random discussion which had made us college buddies realize that the Mecca of all road trips was yet to be lived — trip to the mighty Himalayas. What made the idea more challenging was the fact that the trip was about to be self-funded. A bold step for college-going guys, but with the internships and other part time jobs in the background, the idea which had now become more of a dream, was all set to be fulfilled. The journey was kicked off from the heat of Delhi to the cool of our next stop Manali, which made us curl in warm blankets in the month of August! As the morning took over, the seven of us finally began the expedition on our Royal Enfields to the highest roads in the world. 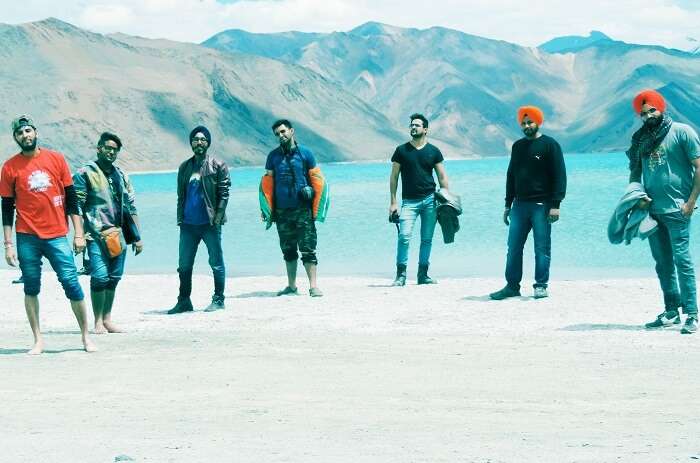 A start in the twilight, light drizzle and the sound of our bullets — we couldn’t have asked for better. Neither could we, in our wildest dreams have imagined, what the future had in store for us. Blissfully ignorant, we rode alongside the most thrilling panoramas and reached Rohtang pass, only to find the roads washed away due to the preceding incessant rains, leaving behind a rough pile of rocks. Yet the high altitude passes along the way were a constant refreshment and a perfect food for amazing clicks. Tempted by the reigning beauty of the landscapes, we halted at all but one — the Baralacha pass. The reason you ask? We didn’t believe it until we experienced it.

Initially,we thought of challenging the influence of the pass’ creepy reputation and prior warnings, but as we were running a little behind schedule we consented to the idea of skipping the pass. On arriving at the camping site, we unexpectedly ran into three other groups heading towards Leh, who joined us in the night’s revelries – the music, the dance and the bonfire. People unknown until last night were now travel buddies and with the never ending roads and enchanting views, the trip was far exceeding expectations. 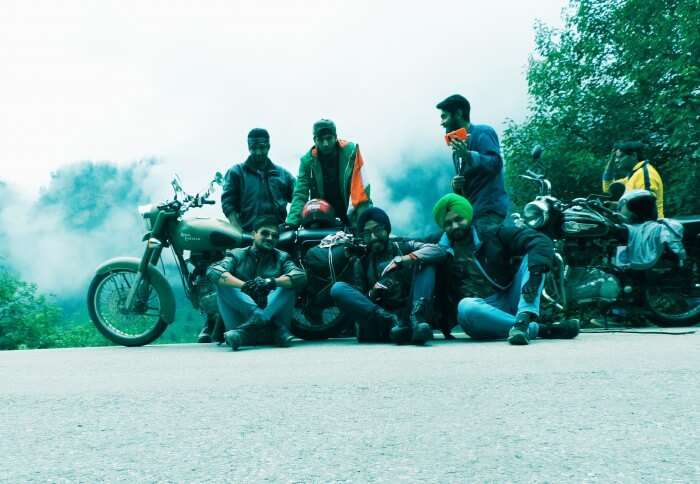 Braving the crossing rains and the fear of cloudbursts, we were making our way to Leh. Since our gang had grown considerably, we hired 3 more bikes and post 25 kms rocky ride, through the Hilltop that said, “highest motorable road in the world” — we reached Khardung La Pass. We had never realised the hype about the place until we experienced it first-hand. Lost in the fantastical views, our 2 hours stay at the place got immortalized by photography sessions and the maggi serving shack (read : café). We were now starting to rejoice the fact that we had exploited this opportunity to the fullest, conquering everything, until the Baralacha Pass came up in a discussion. In order to quench this adventure fetish, we decided to face Baralacha, on our way back.
Everything, was yet to be conquered. 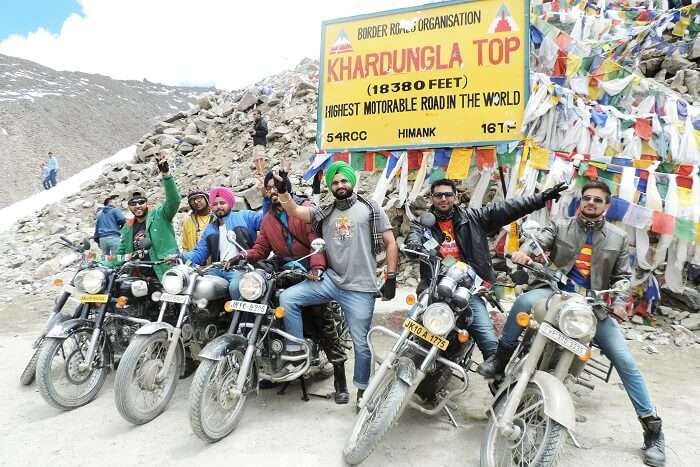 The oxygen levels were low and the weather was opposing our speed. Yet, we managed to continue our journey without a stop in spite of the danger of a sandstorm lurking on one side and possibility of cloudburst on the other but only until Baralacha pass.

So here we were again — the forlorn beauty that we had skipped earlier because of its reputation. Donning a brave face, we were determined on overcoming the hesitation. It were Aditya’s shrieks that shook us into action. We took off immediately, deciding not to stop before the next army base. On reaching the base, our friend in pain was not only given instant medical attention but was offered a ride on an army truck on its way to Manali, since he was in no condition to travel on a bike. With zero vision while crossing Rohtang Pass and rain in full flow, we were driving at around 20-25 kmph eager to reunite with Aditya. At Manali, we found him all fit and fine — bereft of any trace of the phantasmic experience. 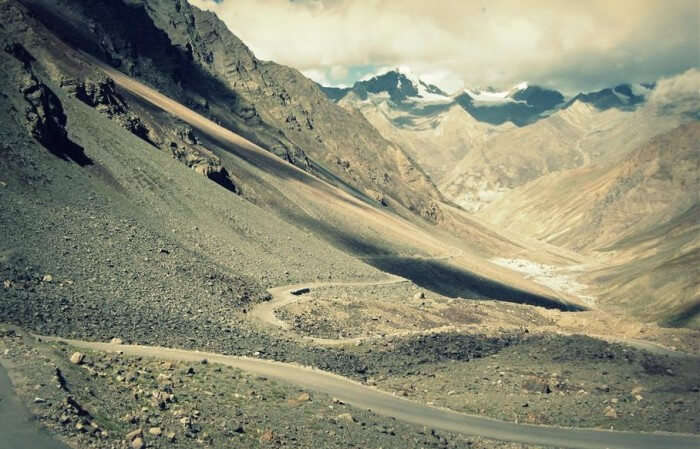 As we continued our retreat journey, violent rains were setting into the quaint of serene roads. Heights were flaunting their victory over vicious depths. We were quiet and strangely satisfied, as though we had surpassed the greatest heights or the deepest lows. It was the murmur of our bikes, narrating our story.

Can we go to Ladakh by car?

Yes, you can visit Ladakh in your own car. The roads are well-maintained and you can easily drive and reach Ladakh. You can plan your road trip between June to September as the roads are closed in other months.

Which are the best hotels in Ladakh?

The most popular hotels in Leh Ladakh where you can stay are The Grand Dragon, The Zen, Gomang Boutique Hotel, Hotel Lasermo, and Hotel City Palace.

Which is the best month to go Ladakh?

To make the most of your Ladakh trip, you must plan your vacation between September to October. To witness the ravishing beauty of Ladakh these months are perfect but if you are planning a road trip then you should plan it in September as the roads are closed in October.

Are private cars allowed in Leh?

Yes, private cars are allowed in Leh. From the markets to the major attractions, you can take your private car anywhere. Taxis from other states are not allowed for sightseeing purposes and you will have to hire a local taxi while exploring the region.

What are the documents required if I take my own vehicle to Leh and Ladakh?

The documents that you must have on your Ladakh road trip are Driving License, Vehicle registration papers, Pollution Under Control proof, Vehicle insurance papers, Aadhar card, and PAN card. You may need a passport size photo and passport as well.

Which are the best restaurants in Ladakh?

To savor the local food, you must dine at the remarkable restaurants in Ladakh. Some of the best restaurants are The Tibetan Kitchen, Gesmo Restaurant, Chopsticks Noodle Bar, Bon Appetit, and Little Italy. 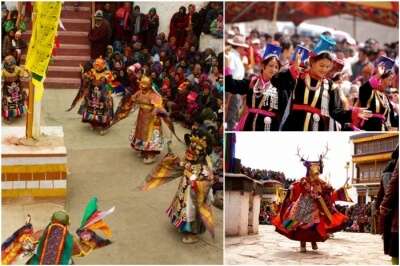 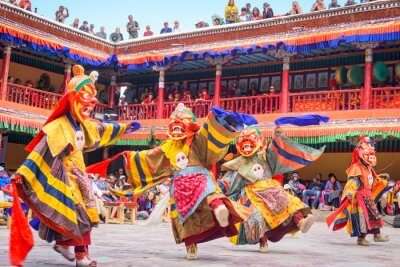 Hemis Festival 2022: Your Gateway To Enter The Magical Realm Of Ladakh