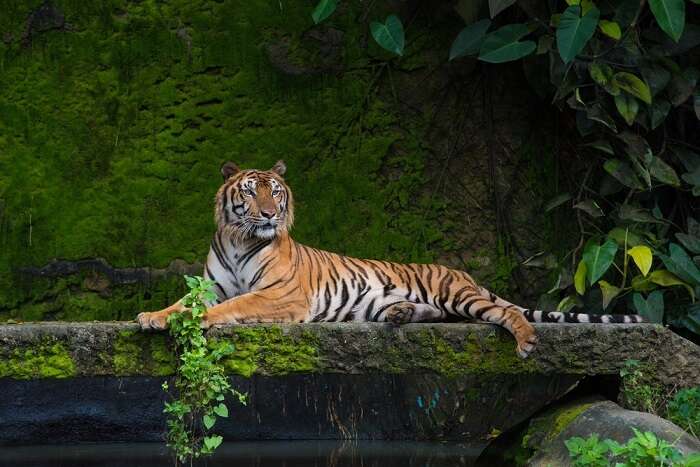 Dubbed as the “Conservation Showpiece of the Kingdom”, the Royal Manas National Park is the oldest of its kind in Bhutan. With a rich genetic depository of invaluable plants, the protected area is blessed with a tropical as well as subtropical ecosystem that favours the growth of a plethora of flora and fauna. The park is flanked by the namesake park of Assam in India in south and the Jigme Singye Wangchuk National Park in north.

From the Golden Langur to Rufous Necked Hornbills – the rare and endangered list of fauna in the park along with over 900 plant species, the 5-year conservation plan addresses all. The Nature Conservation Division of Bhutan and World Wildlife Fund has contributed towards sustaining the biological balance of the park while developing the infrastructure of the park, observing various surveys on socio-economic levels and training the park officials.

The daily rate is 250 USD except during December through February and from June through August when the price is reduced to 200 USD. Both Bhutanese Ngultrum (Nu) and US Dollar currencies are applicable.

Those traveling in groups of 1-2 have 40/30 USD surcharge for the inclusion of transportation, accommodation, food, guide, and entrance fee. The extra cost will be applicable for rafting, mountain biking, horse riding etc. Kids below twelve of age are exempted from 65 USD Royalty Component.

Must Read: 10 Wonderful Wildlife Sanctuaries In Bhutan All Nature Lovers Must Visit

The best time to visit this park is during the winter months of November through February to sight the migratory birds and endemic animals. Nevertheless, the park is open throughout the year and sighting the animals is subject to luck and guidance of the park authority.

November through February, the Royal Manas National Park weather remains pleasant. The climatic variations are quite common although minimal rainfall is seen during the winter season. Around 5,000 mm rainfall is witnessed every year during May through September.

Suggested Read: 4 Airports Of Bhutan That Make Traveling To & Within The Country Easy Peasy!

When you are considering how to reach Royal Manas National Park in Bhutan, the following options will be viable:

By Air: The only internationally connected airport is the Paro International Airport, from where the capital city of Thimpu is closer.
By Car/Bus: The state and private buses can transfer you from Thimphu to Gelephu, Panbang, Trongsa, Dzongkhag, Zhemgang, Tingtibi etc. Renting a private car will be a good choice to reach Panbang from Gelephu by crossing the Indian town Kokrajhar in Assam.
By Trekking: The eco trek of Gomphu to Royal Manas on the Eastern Himalayas can be a great option to explore the natural saga of Royal Manas closely. Check out the Royal Manas National Park map to plan your trek route, which takes maximum 4 days to complete.

Things To Do In Royal Manas National Park

Here is the detailed Royal Manas National Park travel information in relation to the activities you can enjoy:

Once you reach the park, you can explore a number of hiking trails, most of which are joined with the 8 natural salt licks of the park. The eco-trek of four days via Zhemgang to Gomphu to Norbugang or Gelephu to Gomphu to Norbugang instead of taking a car from Thimphu to Royal Manas National Park will be a great idea. You will not only get to see the native fauna but also be acquainted with the diverse flora of the Tropical and subtropical rainforests, cold and warm Broadleaf Forest as well as the evergreen Oak growth.

Suggested Read: 10 Best Places To Visit in Punakha, The Old Capital Of Bhutan

Make your Royal Manas National Park tour memorable with an elephant back ride while watching the world from a different perspective. The mahouts will guide the elephants through the grasslands where you can catch the elusive one-horned rhinoceros in action. While passing through the jungle, the Golden Langurs and Hornbills will seem to be at hand’s reach!

Suggested Read: Destination Of The Month: Top 7 Reasons Why Bhutan In September Make A Solid Case For An Autumn Vacation

Take the 3-hour walk from Park Road to Panbhangto to reach the Manas river confluence. Book a boat ride for half an hour over the turbulent waves and try your hand at angling with the rare migratory Golden Mahseer, Deep-bodied Mahseer, Chocolate Mahseer, and Golden Mahseer. The endangered Gangetic Dolphins can also be seen in pods and are a sight to behold!

Suggested Read: Hostels In Bhutan: 10 Quirky, Awesome, And Affordable Places To Stay In The Happy Land!

When you visit the Royal Manas National Park, a day with the indigenous Khengpa people will let you have an insight into their rich culture. Take part in traditional sports with them or enjoy their traditional performances. Don’t forget to relish their local meals while sitting with them. Learn about their lifestyle and their bamboo-walled household under banana-leaf roof.

Suggested Read: 6 Homestays In Bhutan To Soak In The Goodness Of The Land Of Thunder Dragon!

Check out Royal Manas National Park information about the log cabins if you wish to stay in this park at Nepal. 2 eco-lodges are there in each eco-camp and they are equipped with a camping area, fencing, drinking water, washroom, kitchen, running water, electricity and even hot springs in some luxury lodges.

Image Source
Standing on the Manas riverbank beside the Royal Manas National Park border, this Royal Manas National Park accommodation in the forest offers generator service, jeep safari, elephant ride, and food. Enjoy the view from the balcony and with a bit of luck, you can also sight the wild animals at night and birds in the early morning. Getting a reservation here can be tough though owing to its prime location.

Image Source
This 3-star aparthotel is located 2.3 kilometers from the Simtokha Dzong and offers in-room kitchens with kitchenette, restaurant, and complimentary WiFi connection. Continental breakfast is available from 7.30 to 10 AM. Free parking and airport shuttle facilities are added bonanzas. Moreover, you can enjoy drinks at the bar or lounge of the hotel.

So, when are you planning your trip to the Royal Manas National Park? Book your trip to Bhutan with TravelTriangle right away and get awesome deals and discounts!

Q. Where is the Royal Manas National Park located?

A. One of the oldest and the most picturesque National Parks in the world, Royal Manas National Park is located in Bhutan and is considered as the conservation showpiece of the kingdom for the wildlife.

Q. How do you get to the Royal Manas National Park?

A. Located in Bhutan, Royal Manas National Park is easily accessible. By Air, Bhutan houses Paro International Airport that is just a few kilometers from the National Park. One can hire a taxi that are readily available at the airport in order the cover the distance between the two spots. By Road, there are both government and private buses that are available or one can hire a taxi to reach Panbang from Gelephu.

Q. Is there any entry fee for Royal Manas National Park?

A. Yes, one needs to pay the following entry charges when traveling to Royal Manas National Park:
1. March to May and September to November: INR 17,800 or USD 250
2. December to February and June to August: INR 14,240 or USD 200
3. Kids below 12 years of age: Free of cost
4. Additional charges applicable for rafting, mountain biking, horse riding, etc.

Q. What is the best time to visit Royal Manas National Park?

A. The summer and autumn seasons are the best time to visit Royal Manas National Park. Months from March to May and September to November witnesses an impressive rise in the number of tourists that travel to this National Park.

Q. Are there any accommodations in Royal Manas National Park?

A. One might not be able to find an accommodation in the national park but there are numerous stays around this natural reserve. Some famous accommodations near the Royal Manas National Park are Hotel Minjur Pelri, Manas Hotel, The Bansbari Lodge, Musa Jungle Retreat, The Sikhri Cottages, and many more.

Q. What all species of wildlife can one witness in Royal Manas National Park?

Orang National Park 2020: Your Absolute Guide To The Mini Kaziranga Of Assam!

3 Super Amazing Snake Parks In India For Your Next 2020 Vacay!

6 National Parks In Uttarakhand That Calm Your Adventurous Side In 2020!

Visit These 41 Tourist Places In Bhutan In 2020 To Change Your Worldview!