4 Airports Of Bhutan That Make Traveling To & Within The Country Easy Peasy! 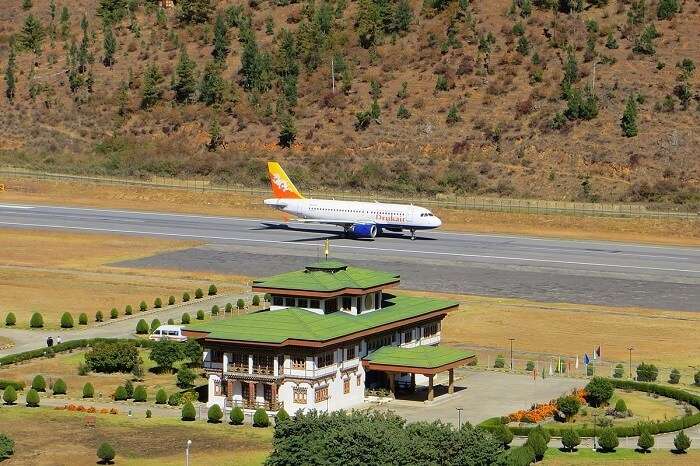 Travelers from across the globe throng the beautiful country of Bhutan nestled in the Himalayas. Otherwise, known as the Buddhist temple, Bhutan is the world’s happiest country and also the only country in the world that’s carbon negative. It is famous for its many monasteries and temples, its forts and ruins, rich culture and the magical captivating landscapes of the Himalayas. Being a popular tourist destination, there are a few airports of Bhutan to accommodate the travel of its many tourists.

If you’re traveling from India, the nearest Indian airport to Bhutan is the Bagdogra Airport in West Bengal. The average Bhutan air ticket price from India is around INR 8,000- 10,000 if booked in advance.

If you are planning a trip to Bhutan, you must take a look at all these airports in Bhutan and where they are located for easy-peasy travel across the country. 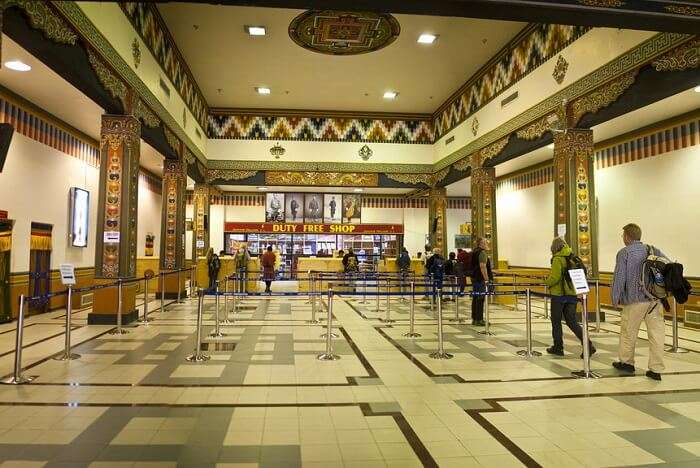 The Paro International Airport in Bhutan is situated in Paro, a valley town in Bhutan, is the only international airport of the four airports of Bhutan, and is located not very far from the city. The airport was started in 1968, and is quite small, having just one runway and one terminal. If you’re planning to visit places like Ha, Tsirang, Chirang, Chhukha, and Daga, then the Paro airport is a good pick to choose as your landing point. In fact, a holiday in Paro itself has a lot to offer and is a popular tourist destination.

Distance from the city: 6 km

Must Read: Bhutan Travel Tips 2022: A Guide That Unfurls Essential Bits Of Info For Tourists! 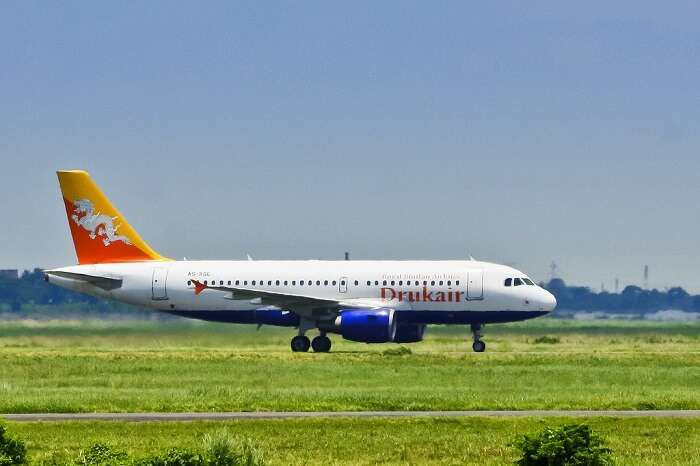 This Bhutan airport is situated in Samtenling, Gewog, close to a town named Gelephu in the Sarpang district in Bhutan. The airport was constructed in 2008 and originally aimed to be an international airport, but due to financial and logistical reasons, it ran on and off, and finally started operating on a regular basis in 2017. The airport only hosts one airline, Druk Air, which flies to and from Paro and Jakar. If you’re traveling to those cities or their neighboring towns, then you could use this airport as your boarding/landing point.

Distance from the city: 3 km from Gelephu

Suggested Read: 8 Homestays In Paro For A Taste Of Bhutanese Charm Amidst Tranquility In 2022 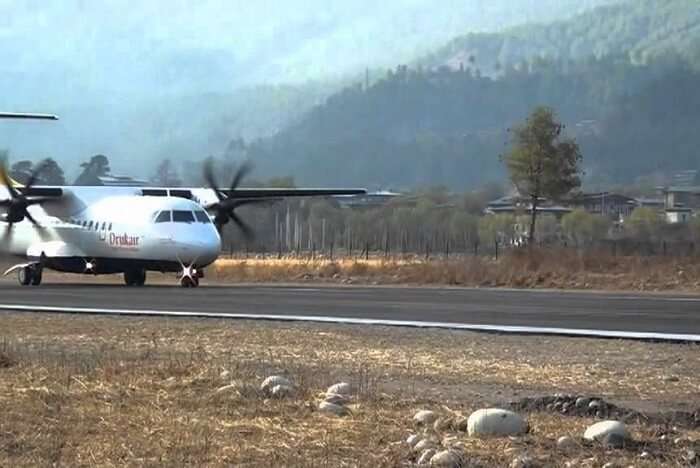 This Bhutanese airport is located in Jakar, and was constructed in 2011. The Bathpalathang Airport is the newest airport in Bhutan and in the beginning had flights only to Paro, till it got suspended in 2012, but was recently reopened for use. There are two main airlines that operate here; they are the Bhutan Airlines, which flies to and from Thimpu/ Paro, and Druk Air, which flies to Paro and Gelephu as well.

Distance from city: 5 km from Jakar 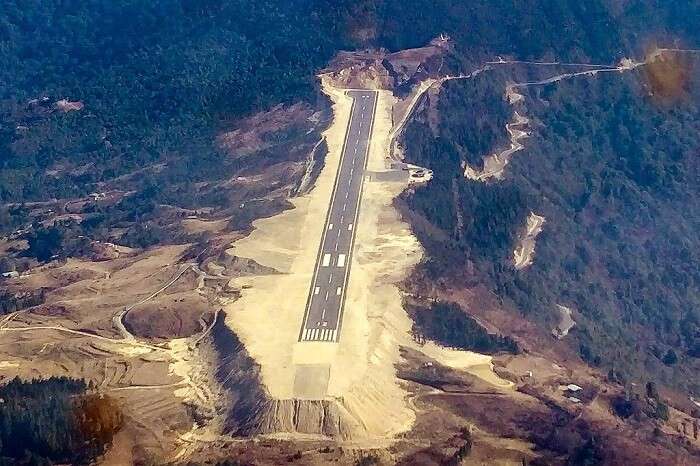 Must Read: Trip To Bhutan: This Journey Has Only Further Fueled My Desire To See The World

Yongphulla Airport, one of the domestic airports of Bhutan, is located near the town of Trashigang in the Trashigang district and was constructed in 2010. Originally constructed by the Indian army in the 1960’s, it had only one airstrip, and was mostly unused. It was only in the 2010’s that it was decided to reopen the airport for use. Now, the airport is developing more and is on its way to becoming an international airport. The two major airlines operating here are Druk air and Bhutanese Airlines flying to Paro and Jakar.

Distance from city: 20 km from Trashigang

Further Read: The Groovy Nightlife In Bhutan And 10 Popular Places To Taste It

Now that you have a good idea of the airports of Bhutan, both domestic and international, it will make it easier for you to plan your travel. Start planning your dream vacation to Bhutan today!

Which is the best airport in Bhutan?

Which airport is the biggest in Bhutan?

Paro International Airport is the biggest in Bhutan. It is the best airport with good facilities for the customers.

How many airports are there in Bhutan?

There are 4 airports in Bhutan. They are Paro International Airport, Yongphulla Airport, Bathpalathang Airport, and Gelephu Airport.

How many airlines does Bhutan have?

Two, Bhutan Air and Druk Airlines. These airlines operate from all the airports in Bhutan.

Which is the main airline in Bhutan?

Bhutan has its national carrier which is Druk Air. Bhutan Airlines, on the other hand, provides international flights.

Which is the most expensive airline in Bhutan?

Druk Air and Bhutan Airlines are expensive. Gelephu hosts only one airline which is Druk Air. This can fly to and from Paro and Jakar.

Which airplane in Bhutan provides the best service?

Bhutan Airlines provides the best service. They are owned by Tashi Air Pvt. Ltd. and they are traded as Bhutan Airlines. They have started their international flights to India and Thailand from October, 2013.

Can I get accommodation facilities near airports in Bhutan?

You have hotels that are nearby the International Airport of Bhutan. There are homestays and resorts too. You can request the hotels for pick up and drop to the airports.

What is the International Airport in Bhutan?

Family Trip To Bhutan: Incredible Things To Do On A 6D Trip 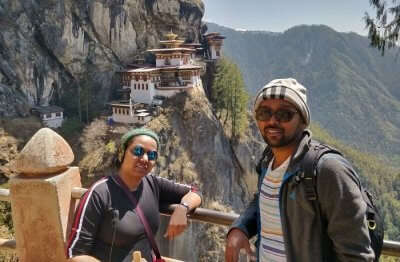 A Perfect Blend Of Adventure & Bliss, Our Romantic Trip To Bhutan Was A Dream Come True Celebrating Our Anniversary On A Romantic Trip To Bhutan 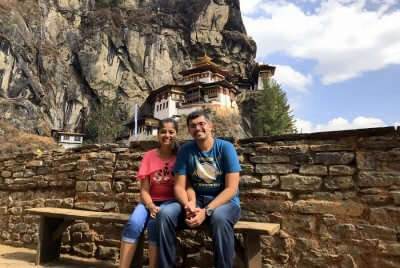