Golden Triangle Trip : An Unforgettable Honeymoon In The Urban Paradise 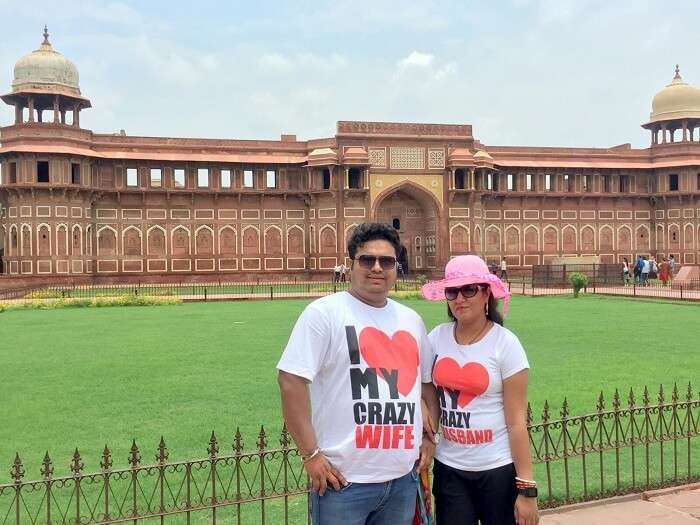 Meet Sangram Das, the travel enthusiast who went on a beautiful honeymoon trip to the Golden Triangle. This honest, quirky and fun-filled account of a couple that loved their time on the road would fill you up with enthusiasm. He booked a package via TravelTriangle for INR 19000 that included their breakfast, transfers, sightseeing and accommodation.

I had a special love for the northern part of our country. I have been to the South, the North-east but could never visit Northern India. Thanks to my professional commitments, we could not go for our honeymoon immediately after getting married.

We planned to go for our honeymoon in the month of July as I was having a few holidays. I had always dreamt of going on a honeymoon in the backwaters of Kerala, in the romantic climate of Munnar. But, when we took out some time to go on a vacation, Monsoon arrived in Southern India which meant we had an opportunity to explore Northern India.

So we decided to go with the Golden Triangle trip, which started from Delhi, then Agra and then Jaipur. Once I started looking for packages for the Golden Triangle trip, a friend of mine recommended TravelTriangle. I was really impressed with the concept of customized user-centric travel. As soon as I contacted TravelTriangle for quotes on my proposed trip, I got a prompt response from a travel representative who linked me to various agents providing the same package.

After having multiple options in my basket, I chose a package from Namo Holidays who gave me a really competitive price. The excitement was setting in, as a vacation for the both of us was long overdue.

After keeping a constant eye on the weather for the past 3-4 days, we were finally very happy to see the weather in Delhi after we landed at around 11 AM. It was bright and sunny (though a bit more humid for our comfort, but manageable). We were then welcomed by one of the best persons that we met during our entire trip, Anand Kumar, our agent representative.

We were then supposed to check into our hotel and then proceed for a half day Delhi sightseeing tour. But as we wanted to get the most out of the day, we skipped checking in and rather proceeded to visit Qutub Minar and the Lotus Temple. Then we had our lunch, did some shopping and proceeded for Red Fort.

While returning we visited the India gate, Rashtrapati Bhawan, and the Parliament. Finally we concluded our busy day by paying a visit to the famous Laxmi Narayan temple and oh boy! It looked so beautiful. Our tired legs and the peaceful ambience inside the temple forced us to spend some extra time there than what we had planned.

Finally, we checked-into our hotel. The hotel was in Paharganj (Hotel Shelton). The rooms were not so spacious but comfortable. We then retired for a good night’s sleep thinking about the places to visit the next day.

Around 7:30 in the morning we checked out from the hotel. Anand was ready with his bags packed as being a Delhi local he had to stay the rest of the days with us. As planned the day before, Anand showed us the famous Akshardham temple on our way to Agra. Also he showed us the F1 circuit and the new cricket ground being constructed in Greater Noida.

We had breakfast on our way to Agra. Since it was very hot and humid,, we decided to visit the Agra fort first and then visit the Taj in the evening when it is less humid.

We hired a guide and went inside the Agra fort. We got to know many things which we never read in our history books. Also worth mentioning, we clicked some wonderful pictures inside the fort. After that, we had our lunch and did some shopping.

Agra is famous for its leather products. At last, it was time to visit one of the seven wonders, The Taj Mahal. The moment we entered, we could feel the romance in the air. We hired a personal photographer so that we could cherish these memories in future. After sunset, we checked into our hotel, Hotel Taj inn. It was a very good hotel, and there was nothing to complain about.

Suggested Read: 11 Places To Visit In Rajasthan: A Glimpse Of Rajputana Splendor

We set out for Jaipur in the morning after having a sumptuous breakfast. On our way we visited Fatehpur Sikri. Thanks to one of Anand’s acquaintances, who rode us on his bike directly to the top thus saving our calories which otherwise we would have to burn walking on our way up to the Dargah.

It is said that the money collected from the sale of Chaddars were used in the education of poor children of all the religions. Fatehpur Sikri can be referred as a mosque, school, graveyard etc. Then after a long ride, we reached Jaipur. Tired by the journey we decided to rest in our room.

Our hotel in Jaipur, the hotel, Acacia Inn was far from the city and we did not like it. The room that was given to us had leakages in bathroom fittings. I called the agent from Namo Travels immediately and informed him of our troubles. He promptly reached the venue, immediately got all the issues fixed.

Then in the afternoon we visited the Birla temple. Over there we got ourselves clicked in the traditional Rajasthani costumes. In the evening, we visited Chokhi Dhani. This was the best part of our trip. My wife was completely lost inside that place. We enjoyed all the events there, be it the puppet dance, magic show, camel ride or the traditional dance. My wife had the best time of her life dancing with them on the traditional folk tunes.

Later in the evening there we had our candle light dinner which was very romantic. The way they arranged the thalis and took care of the guests was simply awesome. We then returned to our room for the night.

As the next morning we planned to visit many local places, we got a local guide arranged for us.  We had the famous onion Kachori and lassi for our breakfast. Thereafter we visited the Hawa mahal, followed by Jal mahal. Afterwards, we visited the Amber fort.

Among many other things, we also got to know about the locations where parts of Jodha Akbar and Bajirao Mastani were shot. Later on we visited the city museum and the famous Jantar Mantar. Then we went to the hotel room, had our lunch and took a quick nap. Later in the evening, we planned to indulge in some local shopping after which, we proceeded back to the hotel for the night.

We had our return flight scheduled to depart from Delhi airport at 6 PM. So after having our breakfast we left for Delhi and by afternoon we reached the Delhi airport. We then thanked Anand and relieved him of his duties so that he could rush home, meet his family and have a good home cooked lunch. With this, we concluded our Golden Triangle trip.

I’d especially like to thank Travel Triangle and Namoh Travels to make it a memorable one. I’m looking forward to have many more trips with you guys. The memories that my and wife I created on this trip are truly unforgettable.

Witness the rich history in the timeless urban wonders of Agra, Jaipur and Delhi  For an experience unlike no other, Book your package to Rajasthan now!

6 Cozy Hotels Near Nathdwara For A Comfortable Stay On Your Next Rajasthan Trip In 2020!

4 Resorts Near Bikaner That Encapsulate The Culture And Essence Of Rajasthan!

Hotel Justa Rajputana: A Stay To Experience The Royal Vibes In The Land Of Maharajas!

8 Best 4 Star Hotels In Rajasthan That Aim To Provide You An Unforgettable Experience!

Hummingbird Resort Mount Abu: Enjoy A Luxurious Stay Amidst The Aravallis In 2020!

10 Amazing Hotels Near Bhangarh Where Comfort Meets Regality And Elegance!