Scuba Diving In Aqaba: An Experience For The Ultimate Seagasm In 2022 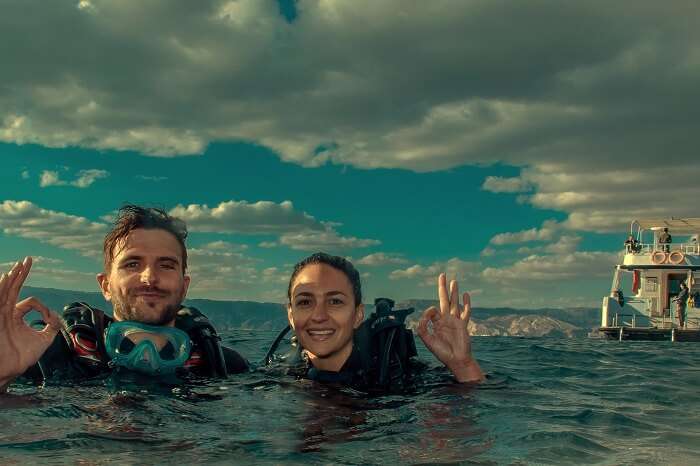 On the very tip of the Red Sea lies the only coastal city in Jordan; a city that is home to over 500 coral species and a vast marine life. No points for guessing that the destination in discussion is Aqaba (the title already reads that aloud!). There are a variety of adventure opportunities in this city but Scuba diving in Aqaba is, unarguably, one of the best things to do. And the following literature will tell you why!

Why Go Scuba Diving In Aqaba?

3 Bays For Scuba Diving In Aqaba

The entire coastline can be divided into 3 bays: North Bay, Visitor’s Bay (or Shipwreck Bay), and South Bay. The dive sites in each of these bays are listed below:

Out of the above listed 3 bays, the following are the most popular scuba diving spots in Aqaba:

One of the most popular sites for scuba diving in Aqaba is actually an artificial reef that came into existence after Cedar Pride – a Lebanese freighter – sunk in the Red Sea in 1985. Diving to witness the shipwreck, lying at a depth of 26 m, is something that divers with all levels of experience can enjoy. Lucky ones might even come across a couple of Giant Napoleon Wrasse or a majestic sea turtle.

This is one of the most interesting dive sites in Aqaba. Not far from the site of the Cedar Pride Wreck lies the Japanese Garden that is known for its picturesque coral. A shallow dive in the waters here offers an opportunity to spot the Little Dragon Fish.

What makes Black Rock such an amazing site for scuba-diving is the fact that it is located at a private beach club. The corals range from shallow ones too those over 40 m deep. And the Ornate Ghost Pipefish is something to look out for.

Suggested Read: Snorkeling In Aqaba: A Handy Guide For A Coral Reef Adventure In The Red Sea!

The Seven Sisters diving site is, without a doubt, one of the most popular sites for scuba diving in Aqaba. In addition to the huge coral formations that it boasts of, there is an American army tank lying at the seabed that the divers love exploring. And the Warty Frogfish and other marine animals that are present here only add to the delight of these scuba-divers.

Suggested Read: Aqaba Restaurants: 7 Handpicked Places Where You Can Relish The Rich Flavors Of Jordanian Cuisine

Paradise is one most exciting Aqaba dive sites. Ashraf’s Grotto is another name given to this site. It can be reached by a short boat ride. The wonderful multi-coloured corals and a variety of fish makes it a great spot for underwater photography. Going deeper will bring you to a small wall and a cave which home to several rare marine species.

Suggested Read: 8 Places To Visit In Aqaba To Have A Thrilling Experience In The Historic City!

Blue Coral is a diving spot near Aqaba that can be reached only from the Tala Bay shore. The marine life has settled around the jetty with delicate coral growth. This spot is also known for its variety in sea creatures that include fish, turtles, sea horses, stingrays, and nudibranchs.

Suggested Read: Shopping In Aqaba: 5 Best Places To Spend Your Money While Exploring The City!

Kiwi Reef is home to a large variety of marine life. It is known for its wide coral growth. The initially you would see a lot of grass but as you dive deeper the sea unfolds its secrets to you. Stingray, octopus, turtles, and nudibranchs are found here. There are several other sea creatures that you may spot. This is also counted among the best spots for underwater photography.

Level: Open Water Diver and above

Further Read: 6 Most Popular Jordan Tours For A Trip To Middle East’s Most Easy Going Places

That’s all you’ll ever need to know about scuba diving in Aqaba! If the water activity gives you an adrenaline rush, think no more! Simply book a Jordan tour package and experience the best of coral life in the Red Sea.

Is Aqaba a good place for diving?

Aqaba is a beautiful coastal city which is known to have warm waters and very hight visibility all throughout the year, and a wide variety of dive sites, making Aqaba one of the best places for scuba divers.

What to do in Aqaba?

Some of the fun things to do in Aqaba that are worth trying are:
1. Windsurfing
2. Snorkeling And Scuba Diving
3. Birdwatching
4. Quad Biking
5. Jewelry making

Is scuba diving in Aqaba safe for first-timers?

Is the certification necessary for scuba diving in Aqaba?

Yes. If you wish to dive into the cozy green waters of Aqaba, you will have to produce a PADI training certificate.

Which are the best places for scuba diving in Aqaba?

A few of the best diving locations in Aqaba are:
1. Wreck of Cedar Pride
2. Blue Coral
3. Kiwi Reef
4. The Tank and Seven Sisters
5. The Wreck of Al Shorouk

What is the average cost of scuba diving in Aqaba?

Which is the best time for scuba diving in Aqaba?

Though Aqaba is a year-round diving destination, September and October are the best months for scuba diving.

Which are the best hotels and resorts in Aqaba?

The coastline of Aqaba, along with the nearby areas in the city, is lined with myriad stay options. While Alcazar Hotel is a wonderful budget hotel, Oryx Hotel and Radisson Blu Tala Bay Resort are the best-in-class accommodations in 4-star and 5-star categories respectively.

Safari In Jordan: A Must-Do Activity That Should Be A Part Of Your Itinerary

Holi In Udaipur 2022: A Royal Affair For All Those Who Love The Festival Of Colors!

10 Places To Go Scuba Diving In Greenland Every Adventurer Must Tick Off Their Bucket List!