Snowfall In Israel: Best Things To Do To Make It A Fun Affair 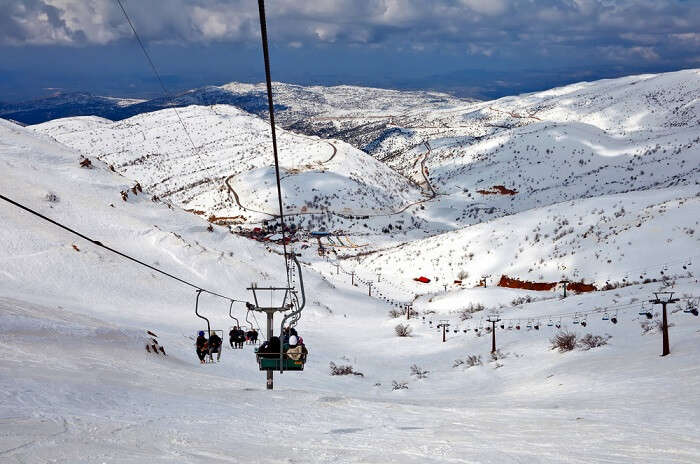 Israel is a land of diverse landscapes. It is mountainous in the northern part of Israel while southern Israel boasts of humid coastal temperatures. The snow-capped mountains in the north are the source of the freshwater lakes and rivers of Israel. It is not a very common winter destination for travelers from around the world which makes the concept of snowfall in Israel unheard of. It snows every year in the region of Golan Heights and Hula Valley while the Negev Desert and the coastal cities in the south enjoy the Mediterranean climate.

How Often Does It Snow In Israel?

Image Source
Snowfall in Israel is a common sight during the months of January and February, especially on Mount Hermon. Apart from the mountain range, the Golan Heights, Upper Galilee region, Safed and Jerusalem receive snowfall every year and the temperature averages between 4 and 12℃. The average snowfall in Israel is about 500 millimeters, enough to turn the Holy Land into a winter wonderland. It was in the 1950s that the country recorded the highest in the history of snowfall in Israel.

Must Read: Israel In January 2021: All You Need To Know Before You Plan A Holiday

Things To Do During The Snowfall In Israel

You can engage in the following activities during your trip to Israel in the winter season. So, which of these would you like to try first?

Image Source
Mount Hermon in the northernmost tip of Israel, is the only snow-capped mountain of the country that opens up for winter activities to the public. It is a popular spot among locals and has the best ski runs and gondola rides. The resort is situated at about 1800 meters above sea level and offers a number of activities such as skiing, snowboarding, mountain biking and sledding to the visitors.

2. Be a part of the Jerusalem Winter Festival

Image Source
Jerusalem gets into the holiday mood from the month of November. It hosts a bunch of festivals over the course of winters that are nothing but invigorating. Every year Jerusalem organizes ice skating and ice sculpting competitions. It also hosts the best film and music festivals in the country. One can be a part of either the festival of lights (Hanukkah) or drown oneself in the wine tasting festival. The winter months of Jerusalem offer a bit to every kind of traveler.

3. Visit the Holy City of Bethlehem

Image Source
Bethlehem is technically in the Palestinian border but not far from Jerusalem. One can go on a day trip to the birthplace of Jesus Christ and visit the Church of the Nativity, the Milk Grotto, and the Rachel’s Tomb. The sacred site will be teeming with pilgrims during the cold winter months but the environment will be joyous and lighthearted. The average snowfall in Bethlehem, Israel is around 530mm every year.

4. Explore the city of Safed

Image Source
Safed is a city in the Upper Galilee region of Israel. Safed receives the same amount of snow as the average snowfall in Israel. It is a historic city that houses many ruins from the Ottoman and Roman rule. The city is an array of narrow alleyways that are filled with flea markets and food streets. One can either go on a historic walk or indulge in some best winter treats in the city. It also hosts many galleries as well as workshops on pottery and glass blowing where one can try their hand at creating some of the art.

Though the season of snowfall in Israel is short-lived, it offers ample opportunities to people to enjoy the holiday season with all the white beauty around and endless things to do. To experience the divine winter season in the Holy Land, plan your trip with TravelTriangle today and grab the best deals on your booking.

12 Places To Visit In Jerusalem In 2021 For Getting To Know The Culture Better!

Winter Is Coming And These 15 Places To Visit In Jaisalmer In December 2021 Are A Perfect Escape!

Bali In Summer: A Pocket Guide For A 2021 Holiday Affair In Indonesia

Mangalore In July 2021: A Pocket Guide To Know More About This Hidden Beauty