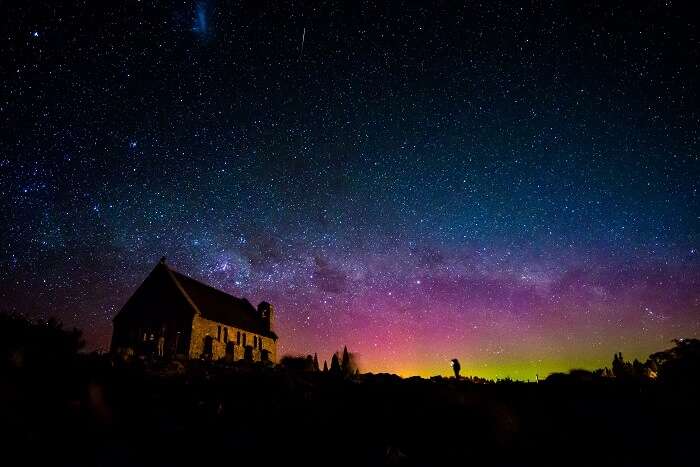 Move over Northern Lights! The new kid in the block – Aurora Australis – is just the kind of beauty you would want to have on your travel bucket list.

While the Northern Lights are on the bucket list – and rightly so – of a lot of travelers, they are not the only beautiful light phenomenon on the planet. Aurora Australis, the lesser known sibling of the Aurora Borealis (Northern Lights), is just as beautiful.

But before you put it on your travel bucket list for the year, read on to know more about the phenomenon and the best places to see the Aurora Australis.

How are aurorae formed?
Charged particles emitted from the sun during a solar flare penetrate the earth’s magnetic shield on colliding with the atoms in the atmosphere result in numerous bursts of light (photons) that appear as Aurorae. These are formed 100 to 300 km above the surface of the Earth.

What are the different shapes and colors of these lights?
Aurorae come in many colors – pink, green, yellow, blue, violet, and occasionally orange & white. Furthermore, there are six major categories of the auroral shapes – curtains, bands, veils, coronas, patches, and rays.

From where can you see the Southern Lights?

The best place to see Southern Lights is the continent of Antarctica itself. The southern lights are most impressive, most active, and most visible here; especially during the months of March to September.

But with the best views come certain difficulties. The ways to get into the continent during winters are filthy expensive and even dangerous. The temperatures are as low as – 50° C. Howling gales and dangerous ice packs are what define the winter topography of the area in winters. But those who can musher the strength and the money to be here in winters are sure to witness an amazing light show in the best place to see Aurora Australis.

One of the southernmost islands in the world, South Georgia finds itself encased by ice for a major part of the year. But the island located to the southeast of Argentina can be easily reached during the months of March to September. Polar cruises are the most popular ways to get to the island.

The Antarctic winter beginning in the month of March offers dark skies that are perfect for viewing the southern lights. But to leave anytime after March for this island with no permanent residents is just too dangerous.

Located in the far south of Argentina, Ushuaia is perfect for viewing the Aurora Australis or the Southern Lights. Despite its location down south, it takes a considerable amount of luck to merely spot the Southern Lights from Ushuaia and you have the poor weather of the city to blame. The persistent cloud cover makes it impossible to see the Aurora even if the sky lights up.

The city has its own airport. So, getting to Ushuaia should not be a problem. And to increase the probability of spotting the Aurora, try heading to a more remote place closeby to avoid any light pollution.

The lesser-known Falkland Islands are home to about 2,500 people and boast of outstanding beauty and a wide variety of wildlife – penguins, elephant seals, and much more. The island’s importance for the Aurorae is evident from the fact that a monitoring system here has been closely recording the activity of the southern lights since 2010.

With myriad stay options and air & sea connectivity, the islands of Falklands make a great vacation spot. And the darkest months of April to August increase the chances of spotting the lights in the sky.

Location: About 400 miles off the coast of Argentina, South Atlantic Ocean

Best time to visit: The darkest months, i.e between April and August

Stewart Island is the closest you’ll get to the South Pole, besides Antarctica. Its Rakiura National Park literally means the land of the glowing skies. The long hours of darkness in winters, coupled with the sparse population and the low levels of light pollution, enhance the view of Aurora Australis.

Where to see Southern Lights in New Zealand other than Stewart Island?

Lake Tekapo & Aoraki Mt Cook National Park, in the dark sky reserve (places with the darkest skies in the world), Invercargill, Dunedin, and Catlins are other places to see Southern Lights in New Zealand.

The capital and the most populous city of the Australian island state of Tasmania is a popular place to see Southern Lights. But large mountains, trees, and light pollution of the city are often obstructions to the beautiful Aurorae. Therefore, nearby locations like South Arm Peninsula, Dodges Ferry, and Cockle Creek are often preferred for viewing the southern lights in Australia.

Where to see Southern Lights in Australia other than Hobart?

How is an Aurora Borealis different from an Aurora Australis?

i. Aurora Borealis and Aurora Australis are lights of northern & southern hemispheres respectively.

Named after the north wind [Borealis: north wind in Greek], Aurora Borealis or the northern lights are seen in the high latitude Arctic region of the Northern Hemisphere. Canada, Alaska, Greenland, Iceland, Finland, Norway, Northern Russia, and Northern Scandinavia are the best places to see the Northern Lights.

Aurora Australis [Australis: south in Latin] or the southern lights are seen in the high latitude region of the Southern Hemisphere.

ii. While the Northern Lights are best observed around dawn, the it is around dusk that the best views of the Southern Lights can be expected.

These lights ideally require the sky to be at its darkest. But further research has revealed that a couple of hours before the dawn and a couple right after the dusk are the best times to see the Aurora Borealis and Aurora Australis respectively.

iii. The ideal months for viewing the two differ.

Its is easier to spot the Aurorae when the nights are the darkest and the longest; something that is common during winters. And so, while it is the Antarctic winter – March to September – that is mostly the best season to see the Southern Lights, the best months to see the Northern Lights are between November and March.

iv. It is easier to spot Aurora Borealis.

Perhaps the most obvious reason for the difference in the popularity levels of the two Aurorae is that it is much easier to spot the Northern Lights vis-a-vis the Southern Lights.

Why is it difficult to see the Southern Lights?

As they say, it is all about the land. Much of the area under the belt of Aurora Australis is in Antarctica, which is a huge chunk of ice surrounded by waters and icebergs. It is hard to reach there, and even harder in extreme winters. In other regions, the topography doesn’t always assist the viewing experience.

Captivating, isn’t it? Plan an international holiday to these places to see the best of the Southern Lights.

Further Read: 25 Breathtaking Photos That Will Inspire You To Travel

5 Simple Yet Interesting Things To Do In Amritsar For All Kinds Of Travelers In 2021!