Visit These 6 Temples In Chikmagalur To Rejuvenate Yourself 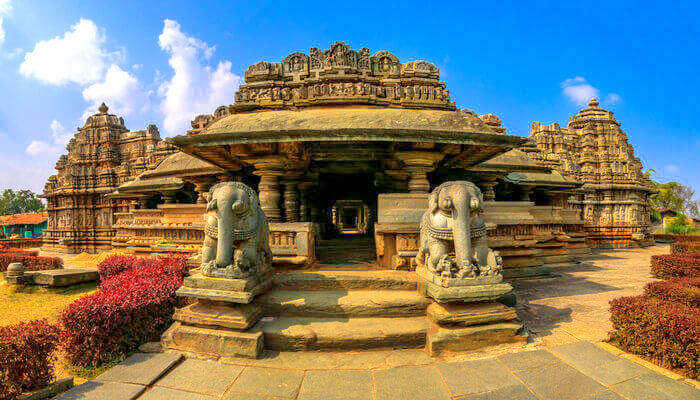 Chikmagalur, renowned for its historical ruins and cultural magnificence, is also well-known for its spiritual abundance, and spiritual surreality. Thus, a visit to the temples in Chikmagalur is a must-to-do if you are looking for a perfect holiday getaway to refresh your mind.

Known as the Dakshinamnaya Sharada Peetham, Sringeri Sharada Peetha is one of the most famous temples in Chikmagalur. According to the legendary fact, it is one of the four Hindu Advaita Mutts and has great importance among the people. It is said that the Mutt acted and followed the principles of Yajur Veda, which are based on the sayings of Lord Krishna.

People throng to the temple to offer prayers to Jagadguru, recognized as the teacher of the world. Here, Jagadguru is regarded as the figure of transcendental wisdom. The seat is presently held by Jagadguru Shankaracharya Sri Bharati Tirtha Mahaswami, who aims to preach the words of Mutt among the disciples. The deity of Goddess Sharada, who is regarded as the Goddess of Knowledge, is worshipped at the temple. Besides religious abundance, the devotees can also witness the lush green nature amidst the captivating mountain ranges.

Must Read: 38 Places To Visit In Chikmagalur In 2022 That Are No Less Than The Northern Hills

Built back in the modern Dravidian age, the Sharadamba Temple tops the Chikmagalur temples list among all. The temple is highly revered and is known for its religious significance. The temple encompasses over a huge area and features a statue of Gopuram at the front of the temple premises. The temple houses the shrine of Goddess Sharada Parameswari, who is known to bless the devotees with knowledge. According to the legendary fact, the temple belongs to the period of Adi Shankaracharya, and it is said that the deity was built in sandalwood back in the time.

The statue was later replaced by a stone and golden idol, during the renovation of the temple in the 14th century. The architectural style of the temples resembles the ideal South Indian style and is something worth watching. The idol of the goddess is present in the Garbhagriha of the temple, which is made of polished granite stone. The hall is leading to the inner sanctum of the temple, supported by strengthening pillars and designed with intricate carvings.

Suggested Read: 27 Exciting Things To Do In Chikmagalur On Your Next Vacay In Karnataka!

Located in the town of Amruthapura, at a distance of kilometers from the North of Chikmagalur, the Amruteshvar Temple is one of the best temples in Chikmagalur, to be flocked by the devotees. The temple was built back in the 12th century, by Veera Ballala II, and was named after its chief architect, Amrutheshwara Dandanayaka. The temple comprises of a vast region and features a vimana (shrine) of ekakuta layout, a wide-open mandapa (hall), and a secure mandapa connecting it with an open hall.

Besides religious importance, the particular temple also possesses great historical significance too and is thus visited by the tourists and devotees throughout the world. The architecture of the temple is something worth witnessing. The visitors can come across a number of shining pillars, which supports the ceiling of the mandapa. The inner part of the ceiling is carved with a range of floral designs. There are about one hundred and forty panels, which are seen depicting the Hindu mythological characters. The visitors can witness the scenes carved out of the great epic ‘Ramayana’ in an anti-clockwise way, while the other side of the wall has portrayed the whereas the north side depicts the life of Lord Krishna and scenes from Mahabharata in a clockwise manner.

There are also a few caves located in close vicinity to the temple, where a number of Jain saints seek peace of mind and meditate. The temple also offers a beautiful scenic landscape in the backdrop for the tourists with the religious Western Ghats and the Tunga River, flowing nearby. The temple does not have a well-maintained structure but possesses a mandapa, which is built by the stones.

Suggested Read: 10 Best And Luxurious Resorts In Chikmagalur Which One Must Pick For A Relaxing Stay

A popular heritage monument in Chikmagalur, the Kodanda Ramaswamy Temple, is one of the most renowned temples in Chikmagalur. The temple is located in the south-east region of the town and occupies a large area with three sections and a dry pond inside the temple premises. The temple resembles the Hoysala style of architecture, while the Garbhagriha and Sukanasi part of the temple resembles the Dravidian architectural style. The shrine, Navagraha, was built back in the 14th century and was finally completed in the 17th century.

There are six main cornices in the temple, where the Garbhagriha and vestibule of the brick are raised. There are several images of deity in the Garbhagriha, which includes the images of Lord Ram, Laxman, and Sita. The major attraction of the temple is Pakara, which is an enclosed region, and display the figures of Yoganarasimha, Vedanta, Deshika, Sugriva, Muddukrishna, Madhava and Ramanujacharya, which belongs to the periods of pre-Hoysala and Chalukya. There are Vishnu scriptures represented on the exterior of the Sukanasi and Garbhagriha.

Suggested Read: 20 Best Homestays In Chikmagalur For A Dreamy Vacation In The Misty Hills In 2022

The beautiful temple situated on the banks of the Bhadra River, the Vidyasankara Temple is nestled in the laps of the Western Ghats. Located at a distance of ninety-two kilometers from the town of Chikmagalur, the beautiful temple has been listed as one of the major attractions. The primary highlight of the temple is the Mahadwara (entrance), which has great historical significance.

Devotees throng to the religious place to offer their prayers, as it is one of the Pancha Kshetras and thus regarded to be one of the sacred sites. There is also a holy pond located inside the temple premises, which is considered to fulfill the wishes of the devotees. Coming to the architectural style, the temple comprises of a Hoysala style architecture, and bears the sculptures from the varied mythologies. The highlighting feature of the temple is the zodiac pillars, which are twelve in total, and are popularly known as Rashistambhas. The zodiac symbols intricated on the pillars have been derived from several astronomical concepts and the theory regarding the movement of the sun.

Further Read: 15 Top Hill Stations In Karnataka In 2022 To Rejuvenate Yourself

The temples in Chikmagalur offer an ideal opportunity to enjoy a perfect spiritual getaway in Karnataka. The tranquility and ambiance surrounding the temple premises soothe the senses and calm the soul from within.

What is the best time to visit Chikmagalur?

Is there any strict rule to visit the temples in Chikmagalur?

There are no strict rules to visit the temples in Chikmagalur. However, there are certain timings, apart from which you will not be permitted to enter the temple premises.

What is the dress code to visit the temples in Chikmagalur?

There are no specific dress codes mentioned in the rule book of Chikmagalur. But it is better if both men and women wear clothes, which cover the whole body, and follows a traditional style.