12 Top Hill Stations In Karnataka In 2020 To Rejuvenate Yourself 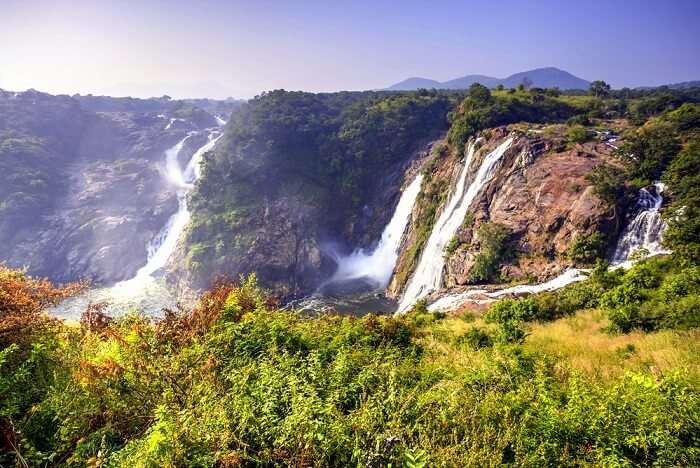 Karnataka is one of the most underrated states of South India. Most tourists are lured by the beaches in Goa and the landscapes of Kerala without ever realizing that the top hill stations in Karnataka offer myriad scintillating landscapes of their own! Karnataka remains unexplored and yet it has so much to offer to honeymoon couples, young travelers and people from all walks of life who are looking to break free from their hectic schedules to seek solace.

Here’s a list of hill stations in Karnataka you can visit on your trip to Karnataka that will rejuvenate your senses and send surplus amounts of oxygen down your windpipe.

Image Source
One of the most popular Karnataka hill stations is the legendary Nandi Hills – a Hilltop with an ancient fortress. Besides being picturesque and serene, it is popular amongst bikers who enjoy the ride to the top of the hill and the thrill of the zig-zag roads while riding down. Trekkers often take up the challenge of hiking up to Nandi Hills.

Where to stay: Nehru house has well-furnished rooms available for tourists. There’s a vegetarian restaurant run by the Horticulture department.

Best Time To Visit: Throughout the year

How To Reach: The most convenient way to reach Nandi Hills is via car or by hiring a taxi.

A trip to South India has a lot to offer – from the tranquillity of forests to charm of sizzling beaches and from lost kingdoms to chills of a hill station. Visit Kerala, Coorg, Ooty, Mysore, or Kodaikanal. Book holiday packages inclusive of airport transfers, cab, resort, sightseeing, and meals.

Image Source
Coorg is a scenic and soothing hill station in Karnataka. Besides the lush green slopes, one must also check out the quaint Namdroling Tibetan settlement nestled on the hills of Coorg. With nature’s bounty and a soothing weather, Coorg is the perfect recipe to destress with your loved ones, or even solo.

Where to stay: Club Mahindra, Vivanta by Taj, The Tamara, The Windflower Resort and Spa, Orange County

Places of interest: You can visit the Abbey falls, go rafting in the river Barapole and quad biking, visit Iruppu Falls, among other attractions in the Coorg hill stations in Karnataka.

How To Reach: One can reach Coorg via Mangalore Airport or via Mysore Railway Station that happen to be the closest airbase and railway station respectively.

Must Read: 10 Places to Visit in Coorg For a Memorable Vacation

Image Source
Located at the foot of the Mullayanagiri Range, Chikmagalur is full of hills and gorgeous views. You can take a bicycle ride on the winding roads, trek up to the summit, camp under the blanket of stars, or just sit and gaze at the endless expanses of greens while sipping on a cup of piping coffee. Chikmagalur will make you want to give up your day job and retire, which is why it as among the most famous hill stations in Karnataka.

Best Time To Visit: September to May

How To Reach: One can board state-run or private buses from the major cities like Mangalore, Hubli, Bangalore, and Hassan that are all connected to Chikmagalur.

Image Source
Agumbe is the Cherrapunji of South India and is located 45 km from Udupi. The best hill station in Karnataka is famous for its adjoining rainforest, serene nature trails, and verdant slopes. It’s the perfect place to rewind with your kins or gang of friends so that you can enjoy your vacation to the fullest, something that makes this place one of the best hill stations to visit in Karnataka.

Where to stay: Agumbe doesn’t have any hotels. There are decent places to stay around 20 km from Agumbe like Hotel Advaith Lancer, Kalgreen Valley resort

Places of interest: Check out the various species of reptiles, birds and animals in the rainforest. Koodlu Theertha Falls, Jogigundi Falls

Image Source
Biligiri Hills is 120 kms from Mysore, which makes it one of the top hill stations in Karnataka for those who visit Mysore and wish to explore beyond cold places in Karnataka as well. The forests at Biligiri are teeming with wildlife and are a delight for nature lovers and wildlife photographers. Also, do not miss out on Chamrajnagar – the coldest place in Karnataka when in Mysore.

How To Reach: One can reach Bilgiri Hills via Bangalore airport or the nearby Chamarajanagar railway station.

Image Source
185 km from Mangalore City, Kemmanagundi is among the most popular hill towns for the students down south. It falls under the Chikmagalur district on the top hill stations in Karnataka map and is an ideal summer retreat to beat the heat and destress amid the fruits of nature. It is a popular hill retreat for backpackers and youngsters who prefer budget travel.

Where to stay: Kemmanagundi Homestay, The Planters Court, Gateway Hotel

Places of interest: The Z point at Kemmanagundi is worth a visit, The Bhadra Wildlife Sanctuary has a very well maintained forest, trek to the top.

Must Read: 23 Places in India to have Bonfire with Your Coolest Friends

Image Source
Gangamoola is a hidden picturesque hill station and one of those cool places in Karnataka where you won’t be troubled by annoying crowds of tourists photobombing your pictures and seflies! Enveloped by dense forests and a misty climate, and it is the origin point of the three rivers Tungabhadra and Netravathi, the beauty of which make it one of the best hill stations in Karnataka.

Places of interest: temple of Goddess Bhagavathi and a 1.8 m Varaha image inside a cave. Gangamoola cannot be visited during the monsoons.

How To Reach: Reach the city of Sringeri or the attraction of Kudremukh first, from where one Gangamoola is located at a distance of about two kilometers.

Suggested Read: 15 Places To Visit In Dandeli In 2020 For Unforgettable Adventure

Image Source
Kundadri is a huge monolithic rock sitting 3000 feet above mean sea level. The 360 degree views from the top are a sight to behold and attract wanderes from near and far! Kundadri is the perfect place to unwind and let go of all the worries of the world, and you may never want to leave! Without a doubt, it is among the top hill stations in Karnataka for summer.

How To Reach: Located at a distance of about 60 kilometers from the city of Udupi, Kundadri can be easily reached from here.

Suggested Read: 3 Resorts In Belgaum That Let You Experience The Calmness Of This Laidback Town

Image Source
Sitauted a mere 25 km from Kumta, Yana is among the most mesmerizing of all top hill stations in Karnataka. Surrounded by lush green forests and eye-warming slopes, Yana is best known for its caves and rock formations that draw vagabonds to this paradise year after year. It is a treat for nature lovers and hiking enthusiasts owing to its endless expanse of uncharted greens.

Where to stay: The best hotels in Kumta are Suragi Homestay, Sanskruti Resort, Om Beach resort

Places of interest: Vishnu Theertha Lake, Nirvana Beach and Hedbandar beach near Kumta are worth a visit

How To Reach: Boarding the train and getting down at the railhead of Kumta station would be the most convenient way of reaching Yana.

Suggested Read: 7 Most Beautiful Villages in India That You Must Visit Before You Die

Image Source
Kodachadri is wonderful hamlet for trekkers and hikers. While the climb will surely give you an adrenaline rush, the scenic views you’ll be treated to once you reach the top will take your breath away! Embrace nature at its best in the serene, less crowded hills of Kodachadri while you head out to explore the best hill stations in Karnataka.

Where to stay: The best places to stay in and around Shimoga are RNS Residency, Pragati Homestay, Soans Island

Places of interest: Climb to the top and see the entire landscape of the western ghat stretch in front of you. Also, see the famous Jog falls

How To Reach: Set at a distance of just 20 kilometers from Kollur, one can also reach Kodachadri from the cities of Kundapur and Shimoga.

You can also explore these hill towns around Karnataka during your vacation:

Distinguished by the carpets of rolling tea pastures and endless greenery, Munnar is among the most beautiful hill stations near Karnataka. The serene ambiance, pleasant weather, winding roads, tea and spice plantations, and those misty views lure in scores of travelers here every year.

Located on the Kannan Devan hills in Kerala district, this hill town sits proudly on the Western Ghats 1,700 m above sea level and is one of the prominent tea providers in India. Though there are various other hill stations in and around Karnataka, this one surely tops the list owing to its unmatched beauty and picture-perfect landscapes.

Best Time To Visit: October to November and January till May

How To Reach: Cochin International Airport, and Kochi railway station happen to be the closest points of entrance to this hill station via air and train respectively.

The true gem of the Nilgiris, or the ‘Blue Mountains’ as they’re sometimes called, Ooty is among the most beautiful hill stations in the country owing to its boundless beauty. Misty hills, aromatic tea plantations, alluring forest ranges, and a super pleasing climate year-round, Ooty has everything you need to make your getaway to the hills a memorable one!

How To Reach: Whether one is traveling via air or train, Coimbatore Airport and Coimbatore Railway Junction is one point from where one would have to board a state-run bus to Ooty.

Further Read: 10 Resorts in The Hills of India with the most Romantic Views

Q. Which is the best hill station in Karnataka?

A. Agumbe, Coorg, Kodachadri, Chikmagalur, Kemmangundi, Madikeri, BR Hills are some of the best hill stations in Karnataka.

Q. Which is the coldest place in Karnataka?

A. Chamrajnagar located in the vicinity of Mysore is the coldest place in Karnataka which witnesses a temperature of 10.1 degrees.

Q. Which is the most beautiful district in Karnataka?

A. Mysore is the most beautiful district in Karnataka which is also considered as one of the most visited tourist’s destinations. Situated at the base of the Chamundi Hills and adorned by the majestic palaces, royal architectures and waterfalls.

Q. Which is the highest peak in Karnataka?

A.  Mullayanagiri peak is the highest mountain peak which is located at Chikkamagaluru. The height of this peak is around 1,930 m.

Q. Which is the cheapest hill station in Karnataka?

A. Chikkamangaluru is one of the cheapest hill stations in Karnataka which attracts tourist with its finest landscapes and serenity.

Q. Which is the most beautiful place in Karnataka?

A. Nandi Hills is one of the most beautiful places in Karnataka which is actually an ancient hill fortress which was built by the Ganga Dynasty in Southern India.

Q. Which month is best to visit Chikmagalur?

A. The best time to visit Chikmagalur starts from September till March. This city is called “the coffee land of Karnataka” and located at the foothills of the Mulayanagiri range. 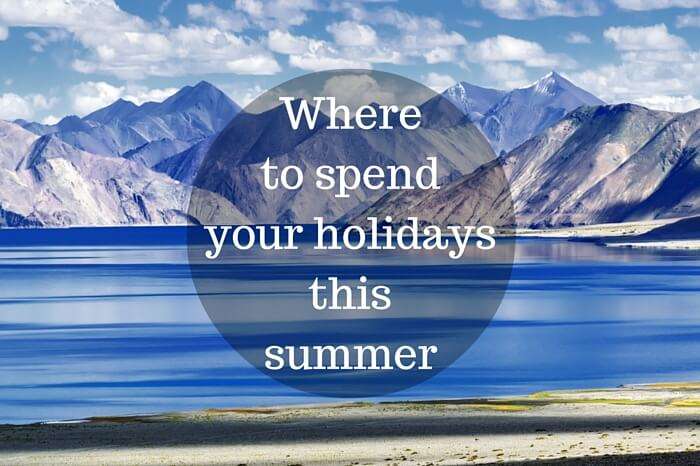 8 Haunted Places In Bangalore To Visit In 2020 For A Thrilling Vacation!

16 Romantic Places In Chennai For A Quixotic Day Out With Your Love In 2020!