5 Stunning Temples In Indore To Marvel At The Intricate Architecture 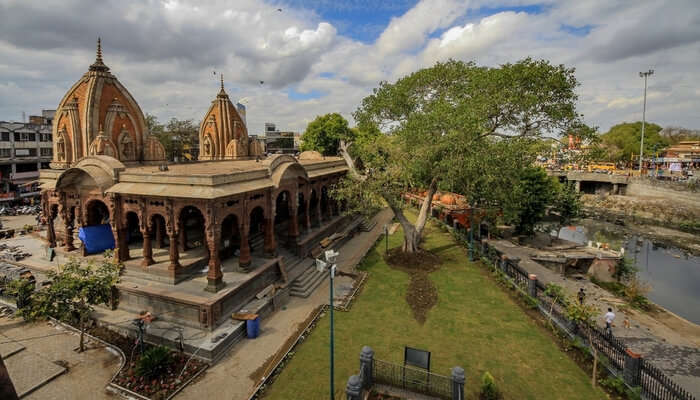 Are you looking forward to traveling to Indore? Do you want to de-stress yourself from the hectic schedule? Then temples in Indore have got the right vibes for you to offer. Indore boasts its religious superiority and architectural excellence over anything else. So, if you are someone who has a keen interest in aesthetic and superior beauty, Indore is the ideal place to head to. Check out the temples that are a must-visit in Indore.

The renowned Hindu temple in Indore, the Shiva Mandir, dates back to the early seventh century and was remodeled by Ahilya BaiHolkar again in the eighteenth century. It hosts a substantial snake sanctuary, which was developed in the seventh century.

The religious vibes of the temple become more prominent during the auspicious occasion of Shivratri. It is done to pay homage to Shri Gutkeshwar Mahadeo, who is believed to be a superhuman. The devotees can catch the mesmerizing sight, where the holy water falls on the lingam of Lord Shiva. The temple, apart from its religious abundantly, also holds stunning miraculous views that attract devotees and tourists from all over the world. It is thus regarded as one of the famous temples in Indore.

Must Read: 10 Best Indore Street Food Delicacies For The Person Who Wants To Savour It All

Built by Rani Ahilyabai Holkar, the Annapurna Temple is among the famous temples in Indore for hosting the most beautiful sanctuary. The sanctuary has a calming ambiance and offers tranquility and peace of mind to the devotees. It is believed that those who come here and pray with a keen heart are blessed with the fulfillment of their wishes. As Annapurna Devi is regarded as the goddess of food, the common belief is that the devotees never face any scarcity of food in life once they have devoted themselves to the holy shrine.

The great tale says that Devi Parvati transformed herself to Goddess Annapurna to teach Lord Shiva a lesson regarding the importance of food. The idol worshipped here is seen in a position where She is holding a spoon and a container of porridge in her hands.

As far as the architecture of the temple is concerned, within the temple premises, there are three different shrines dedicated to Lord Shiva, Lord Hanuman, and Lord Kalabhairava. The statue of four full-sized elephants adorns the gate of the temple, and the walls outside are decorated with beautiful images of legendary characters.

Suggested Read: 15 Best Things To Do In Indore For Feeling The True Vibe Of The City

The legendary tale behind the temple narrates that Pandit Mangal Bhatt had a dream in the past, where he saw an idol of Lord Ganesha and built the statue in a similar resemblance. Later, when Maharani Ahilyabai Holkar came to know about it, she led the excavation and discovered the idol from beneath the ground, and installed it there itself. Since then, the name of Khajrana Mandir Indore has spread among the people, living in different boundaries.

The festival of Vinayak Chaturthi is one of the major festivals held in Indore and is celebrated with great pomp during August and September. Along with the particular celebration, a fair is also organized in the region of the Khajrana temple.

Dedicated to Lord Krishna, the Gopal Mandir marks its location in the Rajwada region of Indore city. It is one of the most prominent temples in Indore and features the idol of infant Lord Krishna. The idols of Lord Krishna, along with Radha, is also worshipped, but in a different shrine. This is the reason that the name of the temple has been named as Gopal Mandir, instead of Krishna Mandir.

According to the historical facts, it was built by the famous Holkar family who had a great knack towards arts and architecture, and its glimpses can be found in the ancient embellishment works on the temple walls. The temple is built in the mixed style of Malwa and Maratha, with pitch-black stones, and holds configuration of a sunken ornamental panel, located in the chamber and the assembly hall. The pillars situated in the temple are designed with gold plated panels too.

Suggested Read: 4 Best Homestays In Indore For You Feel Home Away From Home!

Featuring the idol of Lord Mahavira, the Kanch Mandir is built entirely in white stone in a medieval mansion style, led by a canopied balcony, and a shikara. The interior of the temple is no less beautiful, compared to the exterior of the temple. Glass panels and mosaics cover the interior walls of the temple and the floors, pillars, and ceilings are decorated with innovative craftsmanship work. The temple also possesses crafted Chinese lantern-type glass lamps, and ceilings are lined with the cut-glass chandeliers. There are also many murals designed in the temple, where each depicts something about the Jain mythology.

The Kanch Mandir of Indore features the main idols of Tirthankaras, in the Garbhagriha, and is decorated with colored glasses and mirrors on both sides. A series of Jain festivals like Sugandh Dashami, Kshamavani, and Ratha Yatra is celebrated with great enthusiasm.

Further Read: 15 Best Places To Visit In Indore In 2021 That Give You A Glimpse Of Its Many Charms!

Are you seeking spiritual fulfillment too? Then, do not miss the chance to delve into the exquisite beauty and soak yourself in the spiritual mist of the temples in Indore. They not only let you dive into the devotional side of this city but also showcase the architectural beauty on your trip to Madhya Pradesh.

What is the best time to visit Indore?

If your goal is to explore the temples of Indore, then any time is the best time. Other than that, winter is the ideal time to explore Indore.

Which is the ideal temple for the Jains in Indore?

The Kanch Mandir Temple is one of the best temples to visit in Indore for the Jains. The Jain festivals are celebrated with great pomp too.

A Thorough Post-Covid Travel Guide To Madhya Pradesh: Sojourning The Land Of Temples And Wildlife

8 Places To Visit Near Khajuraho For A Fun Vacation In 2021!

10 Best Hotels In Bhopal: Opt For Your Favorite To Experience Luxury And Comfort