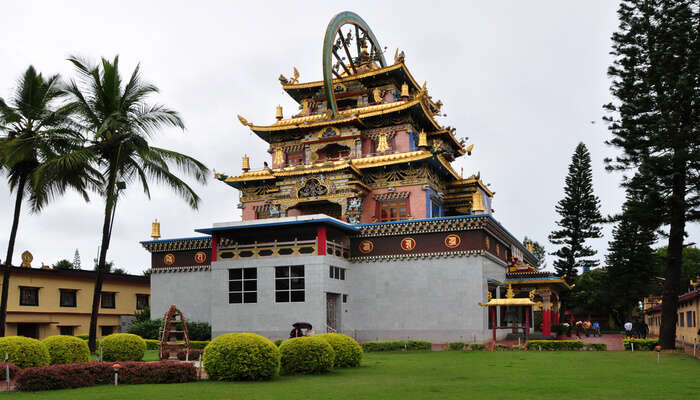 Coorg, also known as Kodagu, is a beautiful hill station in Karnataka. The town is gifted with dense forests, cloudy hills, delightful lakes, fascinating gardens, and soul-soothing temples. The various beautifully sculptured temples in Coorg exhibit treasured ancient history depicted by the creative carvings on them and make the town a serene escape from the daily lifestyle. The following are some famous temples in this city that deserve a visit by travelers who are seeking tranquillity and inner peace on their journey across India.

Take a look at all the wonderful temples in Coorg that you can see when you’re in Karnataka this year. Don’t miss out on any of these spiritual sanctums that don’t just offer profound peace and serenity, but are also famous architectural marvels in this town.

Also known as the Namdroling Monastery or the Tibetan Monastery, the Golden Temple is one of the most renowned Tibetan Monasteries in Coorg. It is situated in Bylakuppe, which is 34 km away from Madikeri. The temple draws the attention of tourists majorly because of the 40 ft tall golden idols of Budhha, Amitayus and Guru Rinpoche, and the alluring paintings which decorate the walls of the temple depicting the Buddist Tibetan mythology.

One of the most revered temples in Coorg, this place is not only a great global tourist attraction but also a centre where knowledge is imparted. Many young Tibetans come here to seek education and enlightenment. A good time to visit the Golden Temple is at the time of Tibetan New Year, also known as Losar. It lasts for around two weeks and occurs in the months of February or March as the Tibetan calendar is based on the Lunar Calendar. During this time, various traditional Lama dances are hosted and the monastery is decorated beautifully. This place is worth visiting as the atmosphere here is calm and serene and watching Tibetans do their religious ceremonies is quite a sight. The market outside the temple lets you shop for the traditional Tibetan stuff.

Must Read: 7 Mystical Places To Visit In Badami, Karnataka That Need Your Attention In 2021

King Lingarajendra II built this temple in 1820 as an act of repentance. It is devoted to Lord Shiva. A linga, the iconic symbol of Lord Shiva, welcomes the tourists on the entrance and is believed to be brought from the religious lands of Kashi. It is architectured in Muhammadan or Islamic style as it has a cupola-shaped structure in the centre and consists of four pillars on its corners. One of the unique features of this temple is that it has a water tank in the front inhabited by an ample number of species of fish.

The water tank has a mandapa in the centre that connects via a small walkway. The entrance door consists of a Copper plate-like structure which has the inscriptions of the temple’s history. While being beautifully sculptured in its own ways, the Omkareshwara Temple has a basic design and can be considered to be a perfect place to find solace and rejuvenation.

Suggested Read: 9 Historical Places In Karnataka Every History Buff Should Visit In 2021

One of the most famous temples in Coorg is the Talakaveri Temple which is situated on the Brahmagiri hill that is 48 km away from Madikeri and 8 km away from Bhagamandala. It catches the eye of thousands of tourists as it possesses great holy significance. The temple’s name, Tala-Kaveri, has its own significance as ‘tala’ means foot and ‘Kaveri’ is the name of the river. Even though not always visible except for the monsoon, as per its name, the temple is considered to be the source of river Kaveri or Cauvery which is one of the seven holy rivers of Hindus. It has a spring known as Brahma Kundike near which there is a shrine.

The river Kaveri is believed to originate from this spring or Kundike. The pilgrims offer their prayers and bathe in the small spring lake where the shrine is placed. During October, on the Sankramana day, it is believed that an abrupt frothing and bubbling of this lake is observed which usually marks the advent of goddess Kaveri. This temple has two temples inside. One of them is devoted to Lord Shiva while the other one is devoted to Lord Ganesha.

Location: Bhagamandala, Coorg, Karnataka, Pin Code – 571247
Timing: 6:00 AM to 8:30 PM
How to reach: The temple can be reached by first getting down at Mysore station and then taking a KSRTC or private bus to Madikeri.

Suggested Read: 7 Major Airports In Karnataka For A Safe & Joyful Trip In The Air

Image Source
Bhagandeshwara temple is situated in the Bhagamandala village at the junction of three rivers: Kaveri, Sujyoti and Kannike and thus are known to be among the most significant temples in Coorg. It was built more than 1000 years ago, during the rule of the Chola dynasty, to glorify Lord Bhagandeshwara, who is a form of Lord Shiva. Except for Lord Bhagandeshwara, the beautiful sculptures of Lord Narayana, Lord Ganesha, and Lord Subramanya can also be found there. It follows the architectural style of the ancient period known as the Karavali style, consisting of a saddleback roof.

In 1790 AD, this temple was renovated by the then ruler of the village, Maharaja Veera Rajendra Wodeyar. Since the temple is located at the junction of three rivers and thus is considered holy, it is compulsory for the tourists, pilgrims, and other visitors to take a dip in the confluence of the rivers. The environment of this place is really refreshing, which makes it a must-visit for any traveler.

This temple is considered to be one of the ancient ones as it was constructed by the king Lingarajendra in 1810 in the town of Kakkabe. It is situated in the Igguthappa Devara betta in the Aiyengeri forest that is around 45 km away from Madikeri. The architecture of the temple is similar to those of the ancient Keralite temples. It is quite significant to the locals of Coorg, as the temple dignifies Lord Igguthappa or Lord Subramanya, who is deemed to be their chief instructor as well as the lord of crops and rain.

The best time to visit this temple might be the one when the annual festival is conducted, i.e. in the month of March, during which worshippers from all parts collectively offer their devotion and prayers to the Lord who is known to fulfil all the desires if prayed with genuine devotion and a true heart, followed by numerous dance performances afterwards. The temple has great significance during the harvesting festival known as the Puthari festival.

Further Read: 7 Things To Do In Tumkur That Are Worth Taking A Trip To Karnataka

The beauty of Coorg makes it a perfect destination to have a tranquil weekend. Coorg is affluent in culture, tradition, spices, natural beauty, and its religious sanctums. Which is why, you should make sure to visit these beautiful temples in Coorg while you’re on your trip to Coorg to make your getaway unforgettable.

Q. What is the best time to visit Coorg?

Q. How many days are required to explore Coorg?

A. A minimum of 2 days trip should be planned if you decide to visit Coorg. However, to go to the core of the city and travel to the deeper parts of it, you should plan a trip of a minimum of 7 days.

Q. What is Madikeri famous for?

A. City shopping is known to be a good eye-catcher for Madikeri. Spices, honey, aromatic coffee are a few of the major popular products. They are available at low prices with high quality.

Q. What budget should be considered to visit Coorg?

18 Remarkable Places Near Udupi That Demand Your Attention In 2021