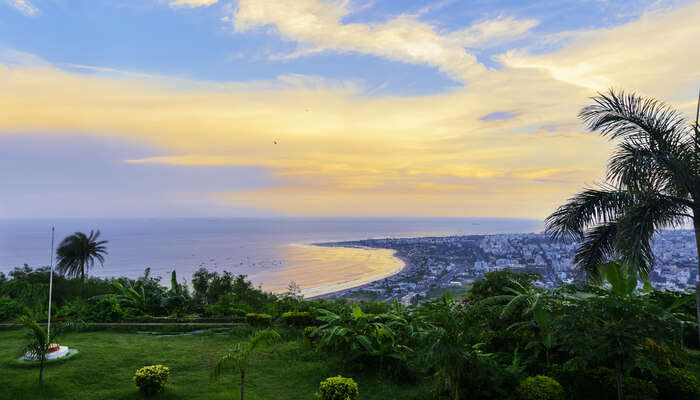 With olive green woods covering the hilly terrain and the mighty River Krishna flowing besides it, Vijayawada is the dwelling of brilliant architecture scattered all over the town. Be it the royal forts, or its holy temples, Vijayawada is renowned for unprecedented monuments that narrate the glorious history behind them. However, the centre of attraction in this city is its extraordinarily, fascinating temples. So scroll below to discover about the seven incredible temples in Vijayawada, and the history behind their formation.

Vijayawada is the temple city located in the southern state of Andhra Pradesh that attracts many tourists because of its religious and spiritual relevance. Make sure you visit these stunning temples in Vijayawada for a spiritual journey.

Built-in the ancient Dravidian style, the fascinating architecture of this temple attracts history lovers and Hindu devouts in huge numbers. Intricate carvings fill the exterior walls and get illuminated by glowing diyas at night. When in the temple, you can hear the sound of River Krishna gushing in the distance.

Another legend claims it to be the abode of Sage Indrakila, where she prayed to the goddess of justice, Durga, to help her put an end to the tyranny of Mahishasura, a vicious demon. Hence, you will find a sacred idol of the goddess consecrated in this shrine, popularizing it as the Vijayawada Durga Temple.

Must Read: 8 Charming Places To Visit In Vizag In Summer For Your Trip To Andhra Pradesh In 2020

Perched on the top of lush green hills of Indrakeeladri is the ancient Subramanya Swamy Temple in Vijayawada that offers panoramic views of Vijayawada city from the temple’s complex, the tranquil ambience and sublime beauty of its location provide a blissful experience. After taking a dip in the holy waters of River Kumaradhara, the pilgrims need to climb a long flight of stairs to reach a charming courtyard.

Intricate carvings outline the exterior walls while ornamental stones and statues adorn the entrance gates. The facade is painted a soft white colour, which radiates in the olive green landscape. The main sanctum of this shrine is a tall pillar coated in silver. It is called the Garuda pillar. The main deity of this temple is Lord Subramanya Swamy. Lovingly addressed as Kartikeya, he is the revered God of Serpents.

Perched on top of a hill in the little town of Mangalagiri, the ancient temple of Lakshmi Narasimha is amongst the most famous temples in Vijayawada. Origin of this shrine can be traced back to the early Vedic period. A gold-coloured gopuram, or pyramidal tower, was constructed to cover the facade of the temple. As the name suggests, the prime idols consecrated inside the temple belong to Lord Narasimha, the holy incarnation of Lord Vishnu, along with his beloved wife, Goddess Lakshmi.

Hence, this temple is a member of the 129 Vaishnavite temples spread all over the country. The temples complex features countless carvings and sculptures belonging to Hindu gods, while an enormous water tank has been constructed in one corner. The main attraction, however, remains the radiant ratha. It is an ancient chariot which was driven by horses and used by gods during their expeditions.

Suggested Read: 25 Gorgeous Places To Visit In India In December 2019 With Your Loved Ones

Located at the base of the mountain of Indrakeeladri Hills, Akkanna Madanna Cave Temple is one of the most divine temples in Vijayawada. It came into existence during the mid-17th century, and since then it has been the spiritual abode for the people. This temple was formed during the reign of Nawab Quli Qutub Shah. The temple honours Akkanna and Madanna, the brave ministers of Golconda under the reign of the nawab, who selflessly served the Nawab and stood by him during all times, before facing a tragic death. Unlike other shrines, this temple does not have any effigy or idol.

However, there are delicate carvings of some Hindu deities on the interior walls of the temple. Supported by numerous pillars, these rock-cut caves have three rooms dedicated to the supreme deities, or Trimurti, of Hindu mythology. Hence, pilgrims and tourists visiting Akkanna Madanna Cave Temple not only pray in remembrance of the Nawab’s loyal administrators, but also to Lord Brahma, Lord Vishnu and Lord Shiva. The simplistic beauty of this cave makes a perfect setting for quietly meditating and rejuvenating one’s soul.

Preserving the sacred religion and rich culture of Jainism is Hinkar Thirtha, an ancient Jain shrine in Vijayawada. Perched atop the emerald forest-covered Mangalagiri Hills, the refreshing winds creating echoes in the air provide solitude for peaceful prayers and introspection.

Constructed in a traditional style, the architecture of this temple bears the basic features of all Jain temple. As you enter the temple complex, you’ll find numerous marble pillars covered with intricate carvings all over them. You’ll also observe the idols of Jain deities chiselled out of granite rocks.

Another eminent temple present in ancient rock-cut caves is the Undavalli Cave Temple. With River Krishna flowing in its vicinity, the temple is hidden with leafy trees fringing it from all corners. Dating back to somewhere between the 4th and 5th centuries, this temple has its origin during the reign of Gupta rulers and reflects the traditional architecture of the cities Khandgiri and Udayagiri.

The temple is a three-story structure. While the first reflects the Jain culture, the second houses a magnificent idol of Lord Vishnu while the third is lined with sculptures from the bygone era.

Further Read: 8 Best Beaches Near Vijayawada One Must Definitely Add In Their Bucket List!

Detailed carvings embellishing the temples in Vijayawada is what makes them so stunning and sets them apart as some of the most enticing temples in India. Hence, if you are planning a trip to Andhra Pradesh, make sure you don’t miss out on its ancient marvels.

Q. How many temples are there in Vijayawada and which one out of them is the most famous?

A. There are more than 20 temples scattered all over the city. However, the most visited shrine in the region is Kanaka Durga Temple on Indrakeeladri Hills.

Q. Are there any rules to be followed when visiting a temple in Vijayawada?

A. Yes. When stepping inside the temple complex, make sure to remove your shoes and walk barefoot. Make sure to maintain peace. You can make donations and offerings to the idols, but make sure that it is permitted by the authorities.

Q. How many days are required to fully explore Vijayawada?

A. Depending upon your mode of travel, you will not require more than 2 days to fully explore all the sacred temples and eminent tourist attractions of Vijayawada.

Q. What is the best mode of transportation to travel in Vijayawada?

A. For local transportation, you can travel conveniently using the local buses operated by APSRTC. You can also opt for auto rickshaws or electric autos. The best way, however, will be to hire a cab and then tour the city.

Q. What are the famous tourist attractions can one visit in Vijayawada?

A. After you are done exploring the temples, you can begin local sightseeing. The famous tourist attractions include Bhavani Island, Kondapalli Fort, Victoria Museum, Besant Road and Prakasam Barrage.

Q. What places near Vijayawada is the best to explore?

A. Travellers to Vijayawada also plan to tour Amaravathi, the new capital city of Andhra Pradesh. You can also plan to visit Rajahmundry, situated about 134 kilometres from the city centre.

Neemrana Fort Palace: A Brief Guide For Your Weekend Trip In 2020!

Easter 2020: Dates, History And Fun Ideas To Celebrate At Home!

15 Places Near Darjeeling 2020: Your Next Stop For A Supreme Holiday Experience

21 Hill Stations Near Coimbatore For A Blissful Retreat In 2020

10 Hill Stations Near Vellore For Those Who Don’t Want To Stop Exploring In 2020!