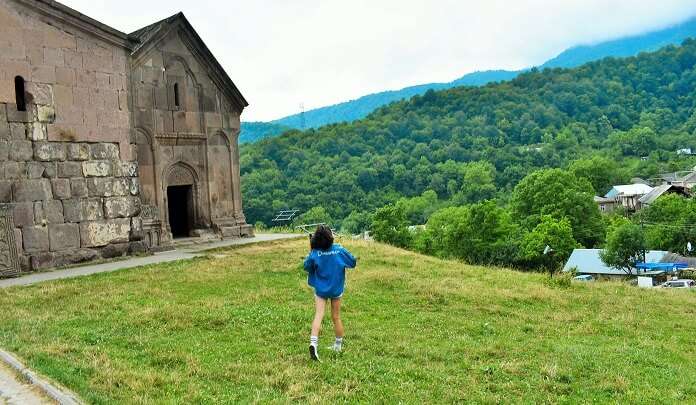 Armenia lies within the borders of Turkey. It is one of the most iconic places in the world with its strategic location in the mountainous Caucasus region between Asia and Europe continents. With picturesque monuments, pilgrimage sites, historic sites, monasteries, natural beauties especially mountain ranges and stunning landscapes, Armenia make for you an endless list of the attractions to experience during a tour to cherish forever. There are various things to do in Armenia that can make your whole experience worthwhile. From its rich culture to history, Armenia will make your memories that will last forever.

Top 13 Things to Do in Armenia

1. Treat Your Palate With Local Cuisine

Armenian cuisines have a sharp influence of European and Levantine cuisines. It reflects the history and tradition of the country too. The most striking difference from the Armenian cuisines to other cuisines is that it relies more on freshness of ingredients rather than the spices used. Different kinds of wheat forms are used with herbs, legumes, dry fruits, dairy, vegetables or meats to prepare the typical dishes like dzhash (stew), Morash. Kyufta, Lavash et al are wonderful local food choices. You can try such signature dishes at any café or restaurant in Armenia.

Cost: For any dish at any local restaurant, the cost would come around INR 700/-.

It is called the ‘Pink City’ because its buildings are made of the volcanic rocks that have different hues of pink. This city boasts its magnificent architecture and also portrays several cultural centres, monuments and museums as the key sights. Even though it is called the ‘City of Stones’ for its old structures made out of stones only, its modern architecture is just an alluring one to appeal all.

Best Places to Visit: Some of the major sites include, Genocide Memorial, Mother Armenia Monument, Republic Square and Vernissage Art Market amongst others are must-visit places.

Suggested Read: 14 Honeymoon Destinations In Asia In December 2019 To Celebrate Your Love Story

3. Try Out The Armenian Wines

Being the oldest country in the world to be producing wines, Armenia is a place that can turn you into a wine person! It has several valleys like the one in the Mount Arafat where high quality of grapes is grown. From the traditional red wine to different fruit flavoured ones from pomegranate and apricot, wines here come in innumerable varieties.

The cemetery is a beautiful collection of Khachkars or cross-stones that date back to at least a 1,000 years. They are well preserved and have very unique and interesting carvings on them. The carvings portray the stories that will leave anyone enticed. One such Khachkar depicts a celebratory wedding scene which tries to show how happiness can help to overcome death.

Location: Gegharkunik province of Armenia, near the town of Gavar.

Suggested Read: 10 Best Places To Visit In August In Asia For An Easy-Breezy Holiday In 2019!

Armenia was the first country to adopt Christianity and that’s why it has several churches from a very long time ago. Some of them are dating back to even 301 AD. These churches and monasteries are renovated and restored periodically to keep their charm intact. There are many ruins in the major locations of Armenia as well that will give you a glimpse into its rich history. Some of these ancient churches are the ones that you must visit for an experience for the lifetime.

The famous Geghard Monastery is one of them. Entire monastery and church have been carved into a mountain. The Zorats Karer is an ideal ruin to be mystified as this peculiar prehistoric site has large stones with holes arranged in a circle. It is popularly known as the ‘Armenian Stonehedge.’

Suggested Read: 20 Best Places To Visit In Asia In October 2020 That Make For The Best Tourist Destinations!

Armenians are their own people and add their local flavour to everything. Even their coffee is completely distinguishable from any other coffee you would drink anywhere else in the world. And, the magic lies in their preparation. They crush their coffee beans, add some water to that and heat in special pots that have a narrow top. They leave the residue on the bottom and enjoy a thick sugar–free coffee. It is a must-try indeed!

Suggested Read: 15 Best Honeymoon Destinations In Asia In Summer Of 2020

The Garni Temple is the last Pagan Temple in Armenia and it is well–preserved till date. It is so beautiful that it was left alone while the other Pagan temples were being destroyed to be replaced by the churches.

Suggested Read: 20 Most Affordable Yet Amazing Beaches of South-East Asia In 2020

Also called as the black lake, Lake Sevan is an enormous lake. It almost takes up to 5% of Armenia. It is a freshwater lake situated at a high altitude of 2000 meters above the Sea level. You can go boating and swimming here or take a cool dip.

There are several ski stations in Tsaghkadzor which is the most popular tourist place in Armenia to go skiing or snowboarding. You can also rent the equipment here. You can commute between the ski stations through a ski lift. There is also a ropeway here that makes for a spectacular view for a top.

Cost: It is quite cheaper and usually cost about INR 1000/- per person.

The Khosrov Forest State Reserve is the perfect place for outdoor activities for the nature lovers. It is not just rich in nature but is also a cultural heritage. It has a wide variety of wildlife with about 9000 species of flora and 283 species of fauna. Expect to spot a Caspian Snowcock or an Armenian Viber or a Bezoar Goat while hiking its beautiful routes.

11. Learn The Historicity At Museums

Armenia has lots of museum and each of them is dedicated to one thing. At the Museum of Modern Art explore the 2,300 artefacts depict the evolution of modern art in Armenia. At the Museum of Folk Art you are amazed by seeing the wide collection of folk art that represents the different eras of Armenian culture and traditions.

At Matenadaran, which houses 23000 manuscripts and ancient printed books, you get in touch with the roots of the Armenian history, heritage and culture. Many such museums and galleries in Armenia are there that have exquisite collections. The wonderful architecture of these museums equally leave you charmed.

Suggested Read: Beyond Thailand: 10 Alternate Travel Destinations in Asia This Summer In 2019

The old Khndzoresk cave village is the largest network of natural and man-made caves. It is situated on the slope of a hill that also has three schools and a few churches. It is not uninhabited. You will also get to cross a 160-meter long bridge that would shake at your every step. It really is the perfect place to have your adrenaline pumping.
Location: Old Khndzoresk, Syunik Province, Armenia.

Suggested Read: 15 Best Places To Visit In May In Asia In 2019 For A Cool And Carefree Vacay

The Wings of Tatev is an aerial tramway that runs across the culturally and historically significant places as well as the natural treasures in the Syunik province. It is a 12-minute ride that soars about 320 meters above. The views are absolutely worth it!

Further Read: 3 Places To Visit Near Asian Civilisations Museum That Are Perfect For The Explorers!

Armenia is indeed one of the best places that offer you the best avenues for a varied number of activities to do and have a good time. Add the above-listed things to do in Armenia in your itinerary to spend your Asian holiday exploring its natural beauties, immersing in its culture and soaking up its history!

Frequently Asked Questions About Things to Do in Armenia

Q. Is Armenia a safe place to travel?

A. Yes, it is definitely a safe place for travellers. It is also a stable place that makes the tourists feels relaxed and comfortable while holidaying.

Q. Is Armenia cheaper than most tourist places in the world?

A. Yes, don’t be discouraged that it is a poor country. It is an added advantage to the tourists because it makes the tour of Armenia merciful on your pocket.

Q. What is the best thing to do in Armenia?

A. Relaxing on the Lake Sevan has been highly recommended by tourists and so is exploring its culture and history in its varied museums.

Q. Which is the best church in Armenia?

A. The medieval mountainside Geghard Monastery is regarded as the best church to visit in Armenia.

Q. What can adventure junkies do in Armenia?

A. You have many options but the best one has to be skiing at Tsakhkadzor and hiking in Vorotan Canyon.