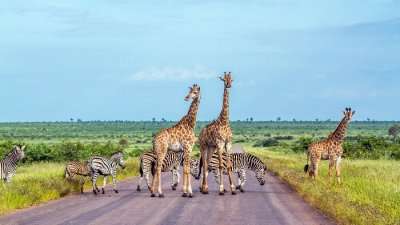 Located on the Southern tip of Africa lies a country that is fast becoming the adventure capital of the world. However, contrary to popular belief there are so many other astounding things to do in South Africa, that it has the propensity to attract travelers who crave for culture, food, sightseeing, or history.

A country famed for its wildlife safari and natural experiences have outgrown its reputation and become something even more beautiful. A South Africa trip is now not just about catching a glimpse of the lions, giraffes, and zebras. Rather, the best things to do in South Africa have started to spread out towards extreme adventure sports, wine tasting, cultural tours, and urban sightseeing.

With plenty of reasons to visit South Africa pushed to the backstage for far too long, we have brought them back to the forefront explaining why this holistic tourist destination needs to be explored more than for what it is now.

Although South Africa is a year-round travel destination, many travelers prefer to visit the country during the most comfortable, warm, and travel-friendly climate. As a rough estimate, the best time to visit South Africa during the summer months of December to March. With the South African weather cycle being opposite, Indians can plan a perfect escape into the sun from the cold, misty, foggy, and polluted winters back in the country.

Top things to do in South Africa

With the exception of a jungle safari, travelers often visit South Africa and end up not realizing what else should they do other than spotting these wild animals in either cages or out in the wilderness. Here are some of the incredibly fun things to do in South Africa that travelers cannot afford to miss on their next African adventure:

Inject some adventure into your life and go for crazy sports like Bungee Jumping in South Africa. These days, it is rapidly becoming a very popular sport among the youth around the world who love to wear their heart on their sleeve and live every moment as it comes by.

For Bungee Jumping, travelers need to visit the Bloukrans bridge which also happens to be the highest bridge bungee dive (208m) located at the Bloukrans beach which is the diving point between Eastern Cape and the Western Cape in the Tsitsikamma area.

Since rope swings (Tarzan swings) are available at multiple locations throughout South Africa, travelers will have to make up their minds in advance on to where they would this experience the most.

Suggested Read: Kruger National Park In South Africa Is Your Ultimate Date With The Wild

One of the popular things to do in South Africa among locals and travelers, people can reach the top of Table Mountain via 350 different paths, wherein the shortest and the most direct path takes about 2 hours to reach the summit.

Suggested Read: 10 Things To Do In Johannesburg That Bring Out Its Vibrant Charm

Some of the best things to do in South Africa bring forth a romantic tinge to an otherwise adventurous activity. One such activity all the romantic can try is going on a hot-air balloon ride with your better half.

Take a drive to the Magalies River Valley which is only an hour from Johannesburg to arrive at the Hot Air Balloon launch site. From there, soar up into the clouds and enjoy a surreal view of the valley, lush green fields, mountains, and an ever-so-charming horizon.

4. Swim with the sharks

One of the most intimidating creatures of the animal kingdom, sharks are often misunderstood as a bloodthirsty monster of the marine kingdom. As it is been shown many places around the world, most of the species of sharks don’t attack unless they are provoked or put under life-threatening scenarios

For added safety measures, travelers can choose to water cage dive among a pool of sharks off the coast of Cape Town. Although the more adventurous people can choose to scuba minus the cage with the tiger and bull sharks without any threat to life!

5. The all famous South African safari

Yes, we know that the jungle safari is the most cliche tourist activity in South Africa, but it still remains as one of the best things to do in South Africa. The wildlife found here is the more rarest and well preserved you will find anywhere in the world.

Pay a visit to the KwaZulu-Natal province and witness the mighty up close and personal as a jeep takes you into the wild grasslands for your date with the vibrant wildlife of South Africa.

Suggested Read: From Running A Marathon To Bungee Jumping, He Did It All In His South Africa Trip!

Not a very known fact among Indian travelers but South Africa produces some of the finest wine in the entire world. The wine produced in and around Cape Towns competes with produce from France, Italy, and Spain.

The major wine producing districts that are located in Cape Town are Paarl, Stellenbosch, and Worcester. Tourists can go on a day-tour from their hotel in Cape Town and see the magnificent vineyards and taste some of the finely made wine of South Africa.

A lot of local interest in the coastal cities like Cape Town is towards things to do in South Africa like surfing. This country has some of the best surfing conditions in the world thanks to the predictability of the weather and tides around the Southern coastline.

One popular routine for surfing lovers is to hire a self-drive car from Cape Town and drive along the coastline all the way to Durban and stopping in the middle to enjoy some of the sweetest surf spots on the planet.

Another activity that hasn’t garnered much attention from the foreign tourists visiting South Africa, but one the most beautiful things to do in South Africa is to catch the wildflower boom in the Cape Floral Region which is home to approximately 9,000 plant species, out of which two-thirds are found exclusively in South Africa.

If you happen to be in South Africa during the first half of August, you will be able to catch the arrival of spring season turns the Northern Cape into a magical bed of flowers.

9. Put your golfing shoes on!

With abundant natural beauty, the golf courses in South Africa are blessed some of the most serene views in the world you will find while playing golf with your peers. Some of the most world-renowned golf courses are- the Links at Luxury Hotel (located in George, Western Cape); and Leopard Creek, built near Kruger National Park.

Suggested Read: Safari Honeymoon In South Africa Is About Kindling Love In The Wilderness! Are You Game?

10. Get to know the tribal culture

Being in Africa gives travelers a chance to familiarize themselves with the tribal population of the place that is visiting. Any country you visit in Africa, and they will have a significant tribal population and history that is worth learning and knowing about.

The South African tourism department promotes and encourages tourists to pay a visit to one of their six tribal villages namely- Zulu, Xhosa, Basotho, Tswana, Shangaan and Ndebele cultural villages. Learn everything there is to know about these tribes ranging from crushing maize, attire, rituals, languages, to their dance rituals that have been passed on for thousands of years.

Further Read: The Mightiest National Parks In Africa For The Love Of Wildlife And Adventure

We’d probably run out fingers if we delve more deeply into all the beautiful things to do in South Africa and why it makes this country such a diverse and unique place to visit. Book a South Africa Tour Package with TravelTriangle to live all these fantastic activities in person on an unforgettable African adventure.

Frequently Asked Questions About Things To Do In South Africa

What are some cool things to do in South Africa?

Jumping off from th highest bungee jumping site, going on a South African Safari, and swimming with the sharks are few of the coolest things to do in SOuth Africa. It is a vast land with exciting adventures and rich wildlife.

What are things to do in Caledon, South Africa?

Visiting the Caledon Museum and embarking on Caledon Wildflower Trail are a few of the top suggestedd things to do in Caledon, South Africa. Go off-road karting and enjoy sumptuous dinner at The Local Sheep Diner and Satellite Br which is locals’ favorite.

What are things to do in Prince Albert, South Africa?

When you are in Prince Albert, do take an Astro Tour to enjoy a night sky full of stars. Head to Bergwater Vineyards and sip wines amidst the beautiful scenery. Bluokop Hikinhg Trail not only provides a boost to adrenaline but also breathtaking views of the Bloukop Mountain.