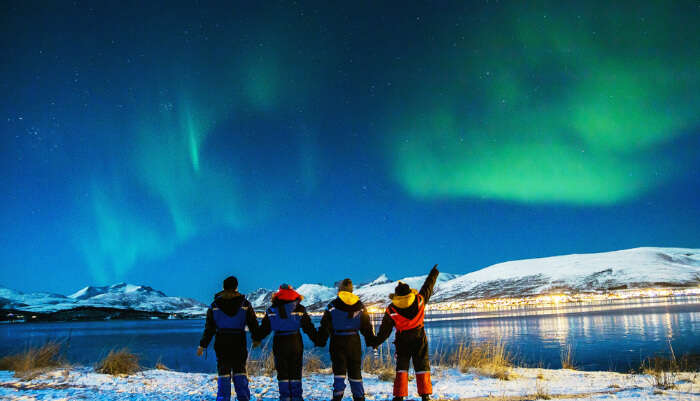 An arctic oasis nestled between snow-capped peaks, Tromso is rightfully called the “Gateway To The Arctic”. Located about 350 km above the Arctic circle, this Norweigan city is abundant with natural beauty and adventure activities. The various things to do in Tromso are like a doorway to heaven for every intrepid traveler and thus this remains a top-notch hotspot for tourists all around the world. Also, the fact that this place is directly connected with the country’s capital Oslo makes it easily accessible for every wanderer.

11 Famous Things To Do In Tromso, Norway

One of the most important aspects of visiting any place near the polar circle is to view the Aurora Borealis or Northern Lights. From early September to April is the best time to visit this jaw-dropping phenomenon. Tromso is situated at the Northern Lights Oval way above the polar circle, thus making it a prime location for gazing at the Aurora. To see the Northern Lights in its full beauty one has to steer clear from the main city, away from pollution and possibly do so on a full moon/waning moon night and it’s one of the best things to do in Tromso at night. There are plenty of companies that guide throughout the Northern Lights tours. So keep your camera handy as this is a shot you never wanna miss!

Enjoy one of the coolest activities with this safari. A typical Lapland experience dog sledding is one of the best things to do in Tromso. The adventurous activity sweeps you through the beautiful polar landscapes while the husky dogs drive the wooden sledge. One can enlist the help from a guide or make his/her own team with the canine buddies. The whole safari takes two hours on a whole and the scenic locations that the ride provides acts as bonus points. It is truly an adventure worth giving a shot!

This is the phenomenon that describes the country’s moniker as the “Land Of Midnight Sun”. Initiating every year from 20th May-22nd July, the place is soaked in the perpetual sunlight, something which is difficult to describe until one sees it. The long hours of the polar night which have never-ending darkness are shaken by the appearance of Midnight Sun, which brings with it a ray of upliftment. Check out this not so common natural phenomenon, where one can see the sun peeking above the horizon.

Tromso is slowly but steadily rising up as the prominent location for whale watching. During the months of October-February, varieties of whales and Dolphins migrate towards the harbor to feast on herrings. The whale variety includes Killer whale, Humpback whale, Fin whale and watching them in the flesh is one of the sights to behold. One of the top things to do in Tromso for exploring marine life expeditions, one can spend anywhere between 3.5-7 hours depending on how quickly one gets to see these species.

5. Sjøgata – Get Feisty With A Snowmobile Adventure

Are you looking for something that will pump up the adrenaline levels? Then this one hell of a ride is one of the most things to do in Tromso. All you have to do is rent a snowmobile and take it for a spin. The guides start the adventure with lessons to drive the vehicle and then suit you up with thermal suits, boots, and helmets. Give it a try as it surely is one of the adventurous activities in Tromso.

This modern masterpiece is nestled in Tromsdalen valley and evokes an adorable charm. The church was built in 1965 and the body of the building has 11 rectangular-shaped aluminium frames. The face of the church is confronted by the glass and a gigantic cross towards the west side. The angular body of the church showcases polar boathouses and Sami tents and during nightfall, the religious place displays brilliant luminescence when lit. A visit to the place is incomplete without admiring the sheer beauty of this architecture.

Suggested Read: 10 Things That Turn Norway Honeymoon Into A Dreamy Beginning For Any Couple

These hauntingly beautiful water bodies emit a classic polar scene. The water bodies are surrounded by snow-capped mountain peaks and sleek waterfalls that cut through the gigantic hills. One can also get a glimpse of the natural polar habitat like seals, reindeer, and sea eagles if you visit the Fjords in between November-January. Kaldfjorden, Balsfjorden, Ullsfjord, and Malagen are few fjords closer to Tromso. It’s one of the most popular things to do in Tromso, do not miss this adventure.

Suggested Read: Norway – The Land Of The Midnight Sun, Might Get Rid Of Time Zone & It Makes All Sense

This adventure takes you up high and enables to see an aerial view of the entire town. To ride the Fjellheisen one has to cross the Tromso bridge to Tromsdalen and reach the lower station for this aerial tramway. The ride is of 4 minutes and takes you up to the Storsteinen mountain ledge which stands 420 meters above sea level. It is also one of the best places to witness the Northern lights. Make sure to include this in the list of the best things to do in Tromso in summer.

Feel like an Eskimo while staying in Ice Domes in Norway. These are nothing but hotels that take raise the bar for arctic wilderness a notch higher. The ice domes are a complete stay package with an ice bar, ice cinema, ice restaurant along with the hotel itself. Experience the real chill of living in the north poles which is one of the best things to do in Tromso in winter. The place really is a big hit with the masses and is undoubtedly a real winter wonderland to explore.

Suggested Read: Norway In May: For A Fun Packed Holiday With The Best Of Spring In This Land!

This place offers a unique collection of flora and fauna in Northern Norway and getting to witness them is amongst the most fun free things to do in Tromso. The park sees the onset of flowering from May onwards and despite the snowfall footfalls of the visitors do not decrease. There are 25 collections of different cold-weather species and among its prized specimens is the Norweigan plants and Giant Tibetian Blue Poppy.

Tromso is one such place in the North Pole which shall win your heart in the first glance itself! The place has many faces that brings travelers here from near and far. Plan a trip to Norway right away and indulge in these fun things to do in Tromso for a surreal and unique experience full of adventure!

Frequently Asked Questions About Things To Do In Tromso

If you are planning a trip to Norway then be prepared to pay premium prices. The destination is on the upper side of the expense scale but is surely worth a visit.

What are the clothes to carry for a trip to Tromso?

Warm clothing is a must! The place is in the North Pole so bring in wool clothing along with a supply of jackets and sweaters. Do not forget boots, scarves, gloves, and hats.

Can you see the Northern Lights in Tromso?

Yes, Northern Lights are a pretty common phenomenon in Tromso. One can experience them from the evening towards late midnight or in the early morning.