Trip To Nathula Pass: A Once In A Lifetime Vacation Worth Taking In 2022 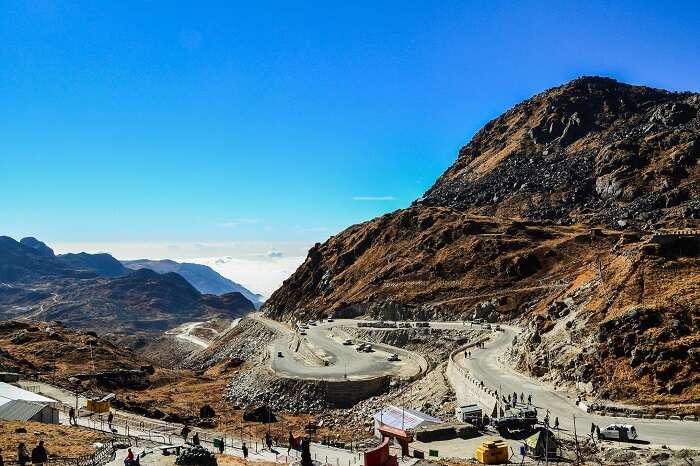 An important pass on the crossroads of the Indo-China border, Nathula Pass forms a part of an offshoot of the Old Silk Road. Things haven’t changed much and the pass still indulges passing tourists in pretty much the same way as it once catered to traders and merchants. Take a trip to Nathula Pass to escape the monotonous squalor of the big city life. But before you do, here’s a quick fact file about this beautiful pass. Read on to know more about one of the scariest roads in India. The Nathula Pass height is 4310m.

Nathula Pass is located 54 km east of Gangtok, the capital of Sikkim. The only way to reach the pass is through a drive from Gangtok. Only SUV vehicles are allowed to be driven to Nathula Pass. Sturdy vehicles such as Innova, Bolero, and Scorpio are available for rent in Gangtok. You can also share a cab till Nathula Pass with other tourists. The road from Gangtok to Nathula Pass is steep and slippery. It is decently maintained, except in a few places. Refer to the Nathula Pass map while driving to the pass.

Travelers are advised to carry a certificate of COVID-negative test while on a trip to Nathula Pass during Corona. The test should either be RT-PCR or Truenat test. The certificate must be obtained within 72 hours prior to the arrival in the state. 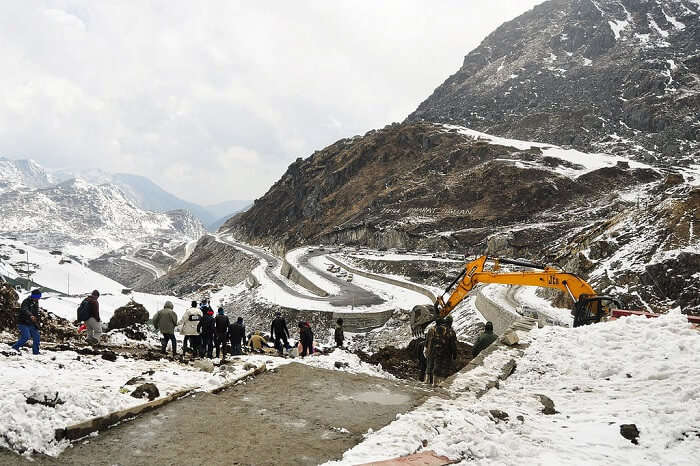 Located on the Old Silk Route, Nathula Pass connects Sikkim to China’s Tibet Autonomous Region. It was sealed for almost four decades after the People’s Republic of China suppressed a Tibetan uprising in 1959. However, when the former Prime Minister Atal Bihari Vajpayee visited China in 2003, talks to open this strategic route were resumed. The Nathula Pass, as it stands today, was reopened in 2006 and has, ever since, served as an official Border Personnel Meeting (BPM) point. Visit Nathula Pass in Sikkim to learn more about the history of the place.

One of the three open trading border posts between India and China, Nathula plays a key role in the Sino-Indian trade. It also shortens the distance between the important Buddhist and Hindu pilgrimage sites, thus strengthening the economy and improving border relations with China.

Must Read: Delhi To Gangtok Trains: The Search For A Picturesque Journey Comes To An End

Preparing For A Trip To Nathula Pass 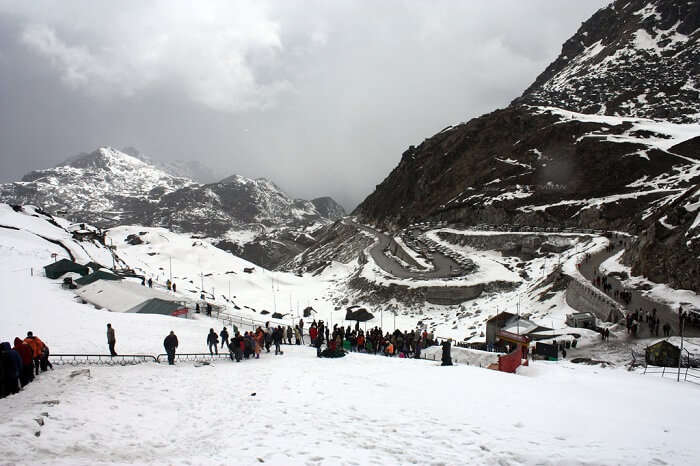 Only Indian nationals with a valid permit can visit the Nathula Pass. A permit can be obtained by applying to the Tourism and Civil Aviation Department. You can apply through a registered travel agency. A photo ID proof and two passport size photographs are required for the same. The Nathula Pass permit cost is INR 200/- per person.

Please note that children below 5 years of age are not permitted by the government due to thin air level and high altitude oxygen levels.

Nathula Weather: The Nathula Pass temperature drops as low as -25 ° C during winters. The minimum temperature during the summer months is approximately 10 ° C. June to September is the off-season because of the monsoon and the looming threat of landslides.

Suggested Read: Rivers In Sikkim: A Handy Guide For A Refreshing Tour On Your Next Trip

There are many places worth visiting in and around Nathula Pass. Here are a few of them. Make sure to check them out on your trip. You will be taken away by the beauty of this place. Take a look: 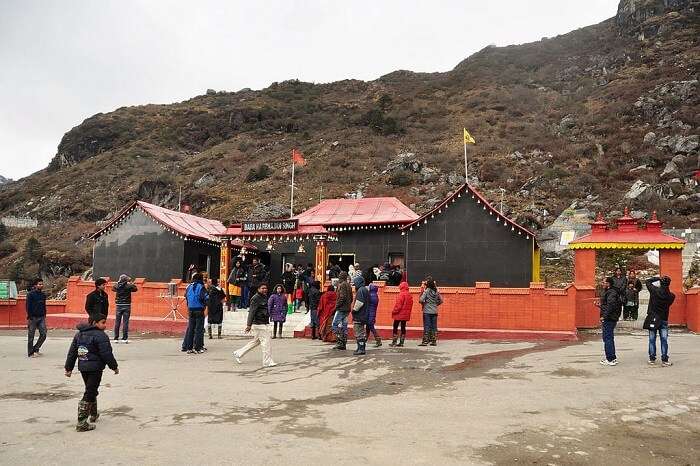 The shrine built in the memory of Baba Harbhajan Singh, an Indian army personnel who died near Nathula in 1968, is a popular sightseeing spot in Sikkim. The new temple is situated at the junction of Kupup Gnathang road and the trail leading to Menmecho Lake. Baba Harbhajan Singh Mandir has a fascinating history and legend associated with it. The local people are of the opinion that Baba Harbhajan Singh still guards the international boundary between India and China. This is one of the most popular temples in Gangtok. 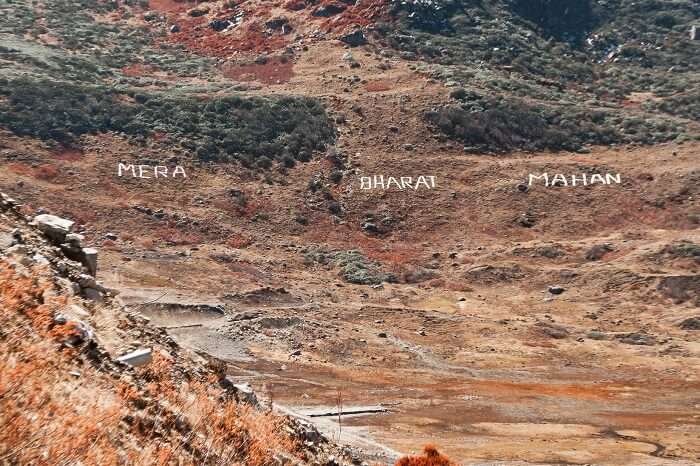 On the way to Baba Harbhajan Singh Mandir is a hillside with the words “Mera Bharat Mahan” written on it. The font size is reasonably big and enough to give you a sudden patriotic rush. Make sure to drop by here on your trip to Gangtok. You will have a blast here and will be amazed by everything that Mera Bharat Mahan Hill constitutes of. It will be a trip of a lifetime.

Suggested Read: 7 Luxury Villas In Gangtok Which Are The Ultimate Staycation In Sikkim! 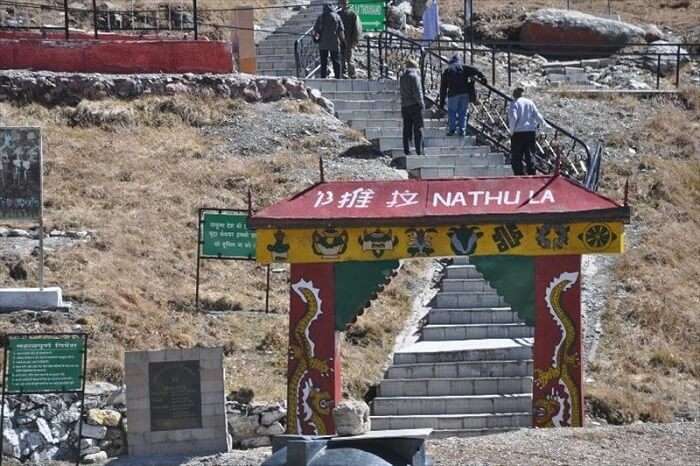 The steep roads from Gangtok to Nathula take you to a staircase leading to the fenced Indo-China border. Climb the slope and stairs slowly and take ample rest in between walking. You will have a blast roaming around here. You can see everything from these steep steps. The views will blow your mind away. This place offers an idyllic scenery and is a traveler’s delight. 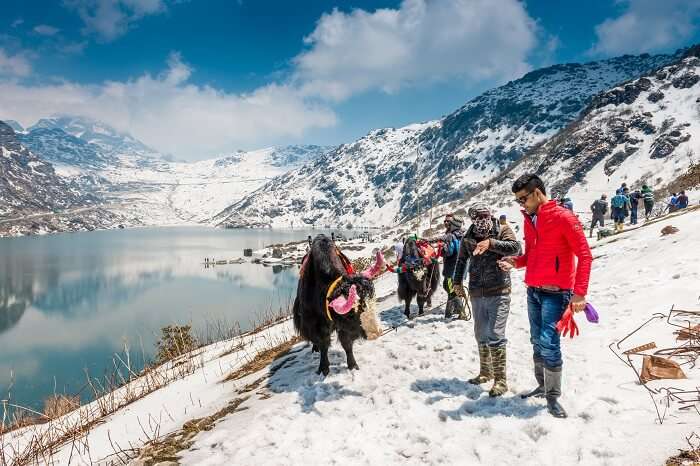 It is 38 km from Gangtok at an altitude of 12,400 ft above sea level and required one to attain special permit from Tourism And Civil Aviation Department of Sikkim to visit it. It’s turquoise water comes from the melting snow of the graceful mountains surrounding it. Home to the Brahminy ducks, the lake remains frozen in winters and is a sight to behold. This is one of the most mesmerizing lakes near Gangtok. 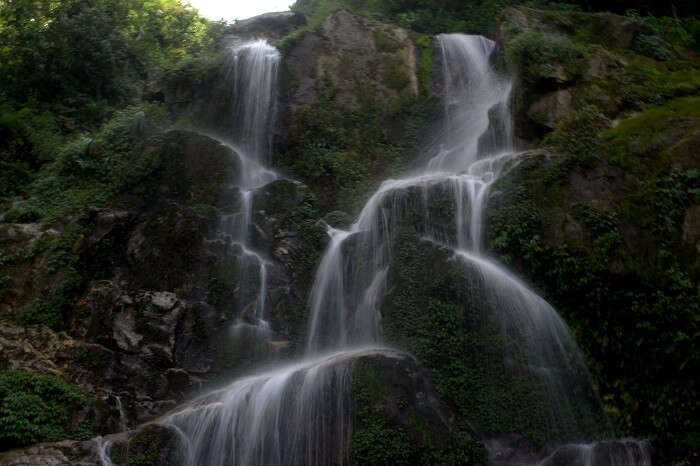 Mandakini Waterfalls is another beautiful halt in the Nathula Pass tour. Stop here to buy some snacks for your journey and to click a photograph. The falls ads to the beauty of Sikkim in the eastern part. You will thoroughly enjoy your time here. You can swim in the water below or simply photograph the places nearby the waterfall. You don’t have to trek to reach here. This is amongst the most beautiful waterfalls in Sikkim.

Where To Stay Near Nathula Pass

The only accommodations available are in Gangtok, which is approximately 56 km away. Both budget and high-end resorts and hotels are available easily. The Nettle and Fern Hotel, Hotel Juniper Tree, and Greendale Residency are some of the budget hotels in Gangtok. The Summit Norling Resort and Spa, Mayfair Spa Resort and Casino, and Orange Village Resort are some of the luxury resorts in Gangtok.

Here are a few tips you should keep in mind if you want to have a comfortable and hassle-free trip:

Further Read: On Our Trip To Sikkim With Family, We Explored The True Charms!

Looking for an escapade? Plan a trip to Nathula Pass now and don’t forget to share your travel stories with us. Book your trip to Gangtok and prepare to get blown away by the plethora of things this place offers. You will be surprised at the beauty and magnificence of Nathula Pass and by the warmth and hospitality of the staff.

How can I get a pass for Nathula Pass?

You can easily apply for a pass at the Tourism and Civil Aviation Department.

What is the best time to visit Nathula Pass?

The best time to plan a trip to Nathula Pass is in the months of May to October.

Which day Nathula Pass is closed?

Nathula Pass is closed on Monday and Tuesday.

Can we visit Nathula Pass in January?

No, Nathu La Pass is closed in January.

What should I wear in Nathula Pass?

Wear woolen clothes and keep yourself properly covered as it gets cold at Nathu La.

Is photography allowed in Nathula Pass?

You cannot take the photos at the border but you are allowed to click photos from the vehicle parking area that 100-200 meters from the border.

No. Foreign nationals are not allowed near the Nathula Pass as well as the Gurudongmar Lake because these regions are very close to the international borders. However, those with required permits are allowed to visit restricted areas such as Yumthang Valley, Tsomgo Lake, Zero Point, etc.

What is the height of Nathula Pass?

The Nathula Pass is at an altitude of around 4,310 meters above sea level.

Why is Nathula Pass famous?

The Nathula Pass plays a pivotal role in vitalizing the Indian economy and has also helped in enhancing the cross border relationship with China. It also plays a very prominent role in the Sino-Indian trade. The Buddhist and Hindu pilgrimage distance is significantly cut short by the Nathula Pass.

Which are the popular places to explore near Nathula Pass?

Here are some of the most amazing places to visit in Gangtok which are very close to Nathula Pass and are totally worth exploring. Tsomgo Lake Lachung Kabi Town Banjhakri Falls Phurchachu Reshi Hot Spring Yumthang Valley .

Can travelers book their accommodation after arriving in the state?

Tourists have to ensure that their travel in Sikkim is pre-booked with the accommodations as per the health and safety guidelines. 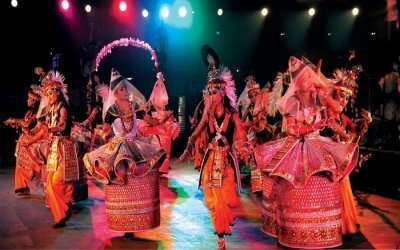 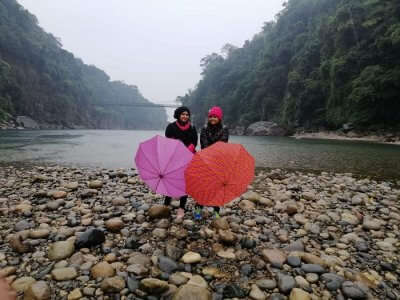 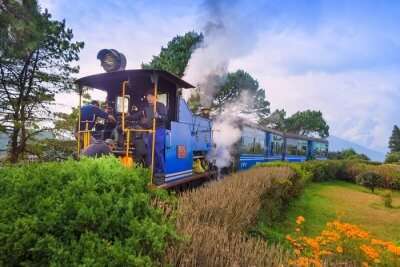 Darjeeling In December 2022: A Little Guide