Gangtok In Summer 2021: An Exquisite Vacation Filled With Fun & Adventure! 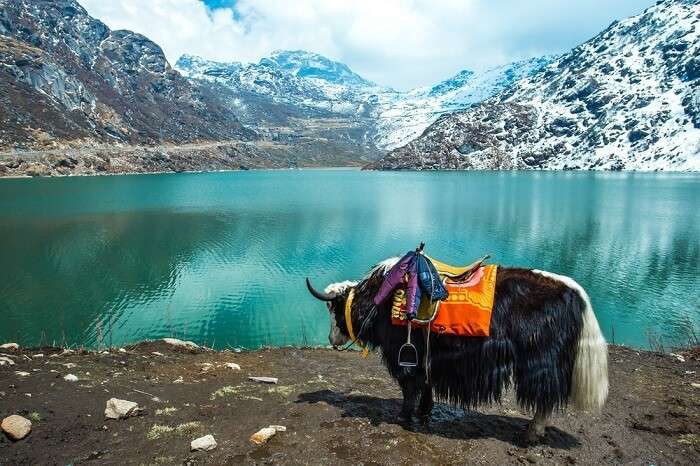 Gangtok is a vibrant upbeat capital city of Sikkim with a blend of modernity and tradition. While the ancient monasteries and pilgrimage sites will soak you in spirituality, the adventure activities will give a boost to your adrenaline rush. All this while the encompassing vistas and breathtaking skylines keep you spellbound.

Though the pleasantly boisterous town is weathered in clouds on most days, on clear days, you are lucky to spot Kanchenjunga, the third highest mountain in the world. This town dons a different avatar in different seasons. While in summers, it becomes a haven for tourists from the scorching heat of Northern Plains, in winters it becomes a sleepy, snow-clad town.

If you are planning to visit Gangtok in summer, here is your guide to have a gratifying experience in the happy-town.

Weather In Gangtok In Summer

The weather in Gangtok in Summers i.e. May-June gets relatively warm and pleasant. The tourist season around this time of year is at its peak. This is why you will see a lot of tourist crowd everywhere in the city. Though it is a good time to explore the remote regions of West and North Sikkim which become inaccessible in winters.

Clothing required: During the day, normal clothing like jeans or short would feel comfortable. For the colder nights, you are advised to carry shawls, jackets or a light sweater.

Here is the list of festivals you can attend in Gangtok while you are on your vacation. Keep scrolling and read along!

A home to lofty mountains and an immense variety of flora and fauna, Sikkim is famous for its orchids and rhododendrons. Post April showers, every nook and cranny of Sikkim is blooming with flowers of variegated colours. Gangtok in summer smells nice from the fragrance of flowers.

The state organizes an International Flower Festival in Gangtok in May to celebrate the vast variety of exotic flowers native to this region. From orchids to bamboos, all kinds of flora is showcased at the festival.

The fest is literally a paradise for photographers and nature lovers. Even if you are not a botany nerd, the myriad of colors and the sweet fragrance will lure you to the fest anyway. The flower show is also accompanied by food festival where you can relish the local delicacies. Foodies, make note!

2. Saga Dawa – The Festival Of Gratitude

Have a rendezvous with Sikkim’s culture and diversity at Saga Dawa festival, a religious riot of colors and festivities. Saga Dawa is a sacred festival of Mayan Buddhists where they gather in temples and pay due honor to their Lord who blessed them with gift of life.

The prayer is followed by a grand pageant of monks traveling around the city of Gangtok and chanting hymns. There is even an exhibition of masked dance. The whole new magnificent experience will open doors to a new world and culture for you.

Dates: End May or early June

Must Read: 13 Most Spellbinding Places To Visit Near Gangtok In 2021

Hee Bermiok is a small village, some 120 km west of Gangtok. Hee Bermiok Festival, which is organised in Gangtok in Summer, is a chance for the tourists to explore the culture and lifestyle of the region up close. The traditional festival is a showcase of variety of rice and indigenous Sikkim culture.

The visitors are served with rice wine and local delicacies. You can stay in their homestays with the

Things To Do In Gangtok In Summer

Thinking about what will you do while you are in Gangtok? Here is the list of interesting things you can do on your trip. Take a look!

Raid against the thrilling rapids in the gushing waters of Teesta River. The rapids of these waters are an international site for rafting ranging from Grade I to V. The river course makes one of the fascinating routes displaying the gorgeous valleys and gorges. River Rafting is one of the few adventure activities you can pursue in Gangtok in June.

If flying like a bird interests you as a thrilling adventure, put paragliding in Gangtok on your list. Opened for public since 2015, the 15-20 minute flight offers you the enthralling views of the mountains and valleys. The weather in Gangtok in summer is  perfect to fly like a bird in the sky.

You can get in touch with any of the certified paragliding operators in Gangtok if you want to sign up for this activity.

Tsomgo Lake is a pristine glacial lake 40 km east of Gangtok. The hypnotic background of lake seems right out of the fables. The best way to soak in the angelic beauty of the lake is the joyride on the Yak’s back. The most traditional transporter in Sikkim is a major attraction among the tourists.

Embark on a thrilling ropeway ride from Deorali to all the way to tashiling. The zig-zag double cable ride gives you a breathtaking bird’s eye view of the Gangtok city. It is one of the most exciting and fun thing to do in Gangtok in summer.

Suggested Read: 10 Things To Do In Gangtok To Experience North-East Like Never Before

Places To Visit In Gangtok In Summer

Check out the list of places you should definitely visit on your summer vacation in Gangtok. Keep scrolling down and read along!

Located at 14,400 ft around Gangtok, Nathula is a high altitude pass which flaunts breathtaking views of the valley. It is the point route through famous Silk Route used to operate. The Indo-China Border is just a few kilometers away from this point. On the eastern horizon, it displays the magnificent views of Chomorhali in Bhutan. You will also find a memorial made in honor of Indian Soldiers.

2. Namchi – The Cultural Capital Of Sikkim

Namchi meaning sky high is the Buddhist equivalent of Hindus’ Char Dhams. In fact, you can find the replicas of four dhams in Namchi. There is a gigantic 135 ft tall statue of Guru Padmasambhava.

You can visit the monasteries around here for spiritual awakening or trek to the nearest valleys to get close views of Kanchenjunga, depending upon the experience you seek.

There are four holy caves in Gangtok which are distinguished as the four cardinal directions. Considered as the abode of Guru Rinpoche, these caves are an important part of the pilgrimage. Each of this cave is present in the remotest of region and provide a wonderful opportunity to watch the interiors of the Himalayan region.

One of the holiest caves in Gangtok, Old Cave of God’s Hill takes you to the remotest regions of the Himalayas. It takes 3 days of trek from Tashiding Monastery to reach this cave.

Cave of Occult Fairies and Secret Cave comparatively have easy access than two other caves.

Cave of Happiness is located in Dzongri and only accessible in months of autumn.

Kanchenjunga is not just a habitat for exotic flora and fauna, but India’s first ‘Mixed Heritage Site’ as inscribed by UNESCO. While you will spot a variety of indigenous flora and fauna in the bio reserve, it is also home to the local tribal community- Lepcha. Tholung Monastery, which is one of the most sacred monasteries in Sikkim, is located in the buffer zone of the park. Walking around the park, you will encounter many glaciers including the Zemu Glacier.

How To Reach Gangtok

There is no airport in Gangtok. The nearest airport is Bagdogra Airport, 124 km away from Gangtok. You can book a cab or taxi to reach Gangtok from here. There are a direct flight from New Delhi to Bagdogra.

There are no direct trains to Gangtok. The nearest railway station is in NJP, 117 km away from Gangtok.

You can take a road trip from New Delhi to Gangtok which will take about two days to reach here. The route via NH 27 connects Delhi to Sikkim and goes through the states of Uttar Pradesh, Bihar, and West Bengal. This route has a few tolls on its way.

Further Read: 10 Things To Do In Gangtok In 2021 To Experience North-East Like Never Before

Whether you seek adventure or spirituality, a honeymooner or planning trip with friends, this place has something for everyone. So, get packed, plan your Sikkim vacation and leave right away to have just the experience you are looking for.

What is the best time to visit Nathula Pass?

May to October is the best time to visit Natula Pass.

Is July a good time to visit Gangtok?

Yes, July is a good time to visit Gangtok.

Can we visit Gangtok in January?

Yes, you can visit Gangtok in January.

Which day is Nathula Pass closed?

Nathula Pass is closed on Monday and Tuesday.

Is it safe to visit Gangtok in July?

It is advised to avoid visiting Gangtok in July because of the heavy rainfall in Gangtok during this time.

Which is the best month to visit Gangtok?

How many days are enough for Gangtok?

We will suggest you to keep three days for Gangtok where you can cover the maximum tourist attractions.

Why is it called Zero Point in Sikkim?

Zero point in Sikkim is actually Yumesamdong which is situated at the height of 15,300 ft. and lies in the Northern part of Sikkim. This place is famous by the name of Zero Point because there is no road where the motors can go on in this area and you cannot go beyond this point as the Chinese border starts from there.

Where should I go first Darjeeling or Gangtok?

Darjeeling is in West Bengal and Gangtok is the capital of Sikkim. Both these places are about 4 hours away from each other, so you can start from either of these places. However, if you visit Darjeeling first then you can be saved by some bad roads in Gangtok.

Embark On Your Journey Of A Lifetime At These 15 Best Hotels In Ooty For Honeymoon In 2021 !