Raja Karthikeya Will Soon Be The First Indian To Travel The North & South Poles, But For A Cause 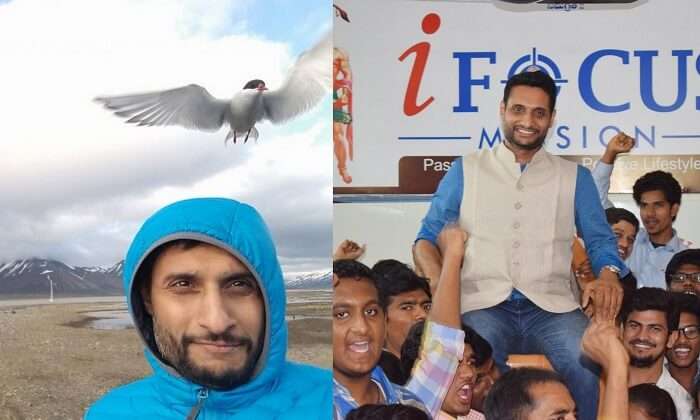 His fundamental aim isn’t to be ‘the first Indian to cross Antarctica in a year’, or even ‘the first Indian to traverse both the North and South poles in a year’. No Sir! He has no personal ambitions. He’s doing this for a far greater cause. While we have only been whining about climate change sitting in our homes, he is going to actually work towards raising awareness for the same leaving his worldly comforts behind.

What Will He Do In Antarctica?

A United Nations civilian peacekeeper, Raja Karthikeya will soon embark on an expedition to Antarctica next month as part of a team led by the internationally renowned explorer Sir Robert Swan.

After aims to use the data and experience he collects during his three-week voyage to conduct workshops and talk about climate change in schools and colleges upon his return. The 36-year-old UN Peacekeeper from Andhra Pradesh also plans to work with engineers and derive solutions and strategies to address the social, economic, and environmental impact of climate change in India.

He will be joining expedition members from 25 other countries at the port of Ushuaia, on the southern tip of Argentina. From there, the group will sail across the Drake Passage around the South Shetland Islands to the Antarctic Peninsula, the home of the two largest glaciers in the world.

“Studying the impact of climate change on the landscape and the wildlife of Antarctica, we’ll stop at a polar research station before crossing the Antarctic circle. We have some leading climatologists sailing with us to help connect science with evidence”, he told a news daily.

Last year in July, Raja had crossed the Arctic circle off Norway’s Svalbard island to study polar glaciers firsthand. Now this expedition to Antarctica will give him an unrivalled opportunity to compare climate change at the two ends of the earth within a single year.

“This is an opportunity to push my horizons, to discover the world’s last wilderness, and to use the experience of a lifetime towards a lifetime of fighting the good fight. So that we are prepared, well adapted and hopefully able to slow down climate change.”

What Led Him To This Campaign?

Born in Visakhapatnam and brought up in Hyderabad, Raja is an honorary member of the Swiss Army’s Rescue Regiment, a licensed scuba diver, and wireless radio operator. He had served as rescue volunteer in the Andaman & Nicobar islands post the tsunami of 2004.

He was at IIM, Ahmedabad, for a college festival when the Bhuj earthquake happened. He met the Swiss Army rescue regiment and volunteered to be their interpreter. The Swiss government gave him an honorary commission in the Swiss army for his remarkable services. “This experience changed me”, he said, “and I started questioning how I could give back to society and how I wanted to impact society.”

Raja, who has a management degree from the Indian Institute of Foreign Trade in New Delhi, had started his career with IFlex solutions in Bengaluru. As soon as he came upon the news of the tsunami in Andaman & Nicobar island, he flew to Car Nicobar in an Air Force plane and worked there for two weeks.

In 2007, he moved to the US for his Master’s, before getting selected by the UN in 2011 and eventually moving to Afghanistan. He served in Afghanistan as “part of the peace process” for four years and then in Iraq for two years.

“I found that political conflicts were being worsened by climate change. Growing salinity in the soil, change in rain patterns, low snowfall – in fact, many countries were paying the price of climate change despite not having contributed to it. It struck me that India, a microcosm of the world, risked facing many such crises – social, economic and security – if climate change was not addressed. This thought motivated me first to cross the Arctic circle.”

Owing to his rigorous services and contributions, Raja received an overwhelming response to his crowdfunding campaign. He has already raised INR 9.36 lakh against the target of INR 7 lakh. He required INR 15 lakh for the expedition and has already been promised a sponsorship of INR 5 lakh!

Right now as you read this, Raja Karthikeya is readying himself for his Antarctic expedition and he will stop at nothing before the mission at hand is done and dusted. But the bigger mission – bringing down the adverse effects of climate change – is not something that one man could do alone. Come forth and help him show mankind the future they’re heading to and how they still have a chance to save the world. Who’s willing to step up?