Wildlife In Cape Town: 8 Best Places To Visit To Get The View Of The City’s Wildlife 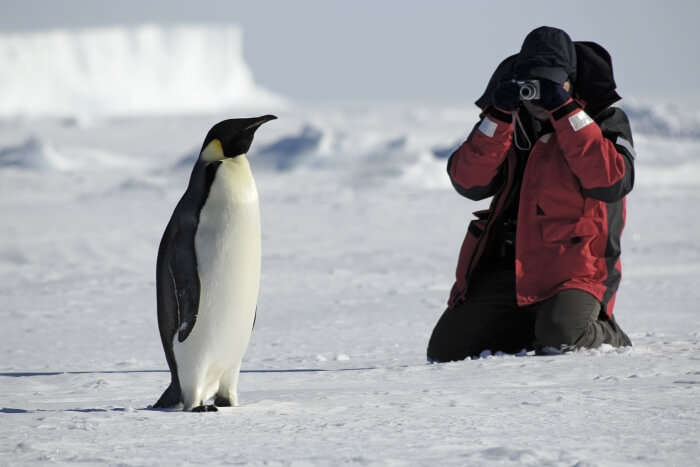 Cape Town with its mild climate, beautiful surrounding and well-developed infrastructure is one of the most popular tourist destinations in South Africa. The ‘Mother City’ Cape Town is the most seasoned city in the Republic of South Africa and is situated between the sea and the mountain, with a national park at its groove. The exclusive scenery of the region makes it favorable for travelers to explore and orientate themselves easily in the city. Famous for its harbor, diversity and various landscapes and ecotourism, there is a lot to witness in terms of wildlife in Cape Town.

Cape Town is rapidly turning into a hotspot for tourists looking for their adrenaline fix. Cape Town has a lot to offer for the travel enthusiasts and the Cape Town Tourism along with the help from people and government is trying to give the best experiences to the travelers.

Read on to know more about the places you can visit while exploring the wildlife in Cape Town in the various nature reserves, parks and sanctuaries spread across the city. wildlife in cape town is an addition to this glory. Here’s our pick:

Located in South Africa, this national park protects the natural environment and the wildlife in Cape Town. Spread across 221 square km, the park is a part of the ‘Cape Floristic Region World Heritage Site.’ Animals residing in the park are well acclimatized to their surroundings and not that simply spotted amongst the vegetation. A wide range of antelope species and mammals such as Bontebok, Cape Mountain Zebra, Eland, Chacma Baboon, Cape Clawless Otter, and Klipspringer can be seen in the park. ‘Jackass Penguins’ at ‘Boulder’s Beach’ are the attraction of the ‘Table Mountain National Park’ amid all the wildlife parks in cape town.

Spread across 4 hectares of land, ‘World of Birds Wildlife Sanctuary’ and ‘Monkey Park’ is an avian, unfriendly and untamed life sanctuary in ‘Hout Bay’, an area of Cape Town in South Africa. This natural life sanctuary centers around birds and monkeys. This park is renowned to be the biggest African bird park. With around 330 bird species, the 3rd maximum bird variety in any zoo, there are around 100 aviaries as most by far of the birds are shown in a stroll through aviaries. Amongst the many birds include groups of eagles, owls, penguins, flamingos, hornbills parrots, and weavers. The mammals and reptiles include marmosets, baboons, tamarins, meerkats, monitor lizards, green iguana, and tortoises.

Boulders shoreline is situated in the Cape Peninsula is famous for the place of settlement of African penguins (also known as the Jackass Penguins). The African penguins build their home there in 1982 and are currently under the safety of the ‘Cape Nature Conservation.’ The visitors are not allowed to touch them and can get close up to these adorable beings through accessible three wheelchair-friendly boardwalks. Summer season is the most ideal time to visit ‘Boulders Beach’ as visitors can witness the most penguin. There are smaller number penguins on the coastline from September to October as the birds spend too much time out at the sea searching for food. The ‘Boulders Beach’ is among wildlife places in Cape Town which is an ideal swimming place for children.

Suggested Read: Everything You Ought To Know About Cape Town’s Victoria And Alfred Waterfront

‘Cape of Good Hope’ with its varied habitation is a home to around 250 species of birds. It is the most photographed wildlife reserve. The ‘Cape of Good Hope’ is a rocky cape and is situated at the southern slope of the Cape Peninsula. Bontebok and eland, red hartebeest can be seen eating in the lawns in ‘Smitswinkel Flats.’ Grey rhebok are scarce but one can observe them along the coastline hills in Olifantsbos. The Cape of Good Town is also home to Cape Mountain Zebra and also offers excellent viewpoints for whale watching. Its location between two major ocean currents guarantees a rich diversity of aquatic life. Seals, whales, dusky dolphins and are also found in this wildlife reserve in Cape Town. Chacma baboons are closely associated with Cape of Good Hope. They are scattered across southern part of Africa and are prime tourists attraction The Chacma baboons are classified as “least concern” in the ‘IUCN Red List of Threatened Species.’

Image Source
The ‘Cape Point Ostrich Farm’ is a fruitful breeding farm and was established in the year 1996. It is situated 600 meters from the admission to the ‘Cape of Good Hope Nature Reserve.’ It is the breeding ground of the world’s largest flightless birds, the Ostrich. Guests are offered with visit and can observer the rearing of the Ostrich as 40 ostrich couples are kept in 40 camps on a 65 Ha Cape Dutch style family cultivate. It is one of the untamed life spots to be visited in Cape Town by the tourists. False Bay and Seal Island

‘Seal Island’ is a small isle located 5.7 kilometers from the northern seashores of False Bay, neighboring Cape Town in South Africa. The island is named as the ‘Seal Island’ due to the large numeral of Cape fur seals that inhabit it. It is also houses seabirds and non-marine birds also fly there to breed. The island is renowned for the great white shark, the seal’s main predator. The great white sharks are exceptionally active during the winter season and viewers can witness natural predations.

Image Source
Stroll into the rich tropical greenery enclosures at ‘Butterfly World Zoo’ and be welcomed by the sound of birdsong, running water, flying butterflies, while taking consideration not to venture on the green tree iguana lying on the way. Guests before long understand this isn’t just a butterfly zoo, yet a sanctuary for extraordinary creatures, a bird nature preserve, a place where reptiles get the exceptionally particular consideration they ought to and a more. This place is the ideal family trip amid wildlife places in cape town. It is likewise perfect for instructive school assemble trips, photography openings. The animals, bar the butterflies, have been given by proprietors or ecological and preservation authorities. Butter World also encompasses a skeleton park consisting skeletons of the various animals.

Suggested Read: Shopping In Cape Town: 11 Best Places That Are A Shopaholic’s Retreat

At Le Bonheur, you can get very close with reptiles. You can spend some time with the largest African reptile here. Contingent upon your adrenaline edge, you can confine jump with a croc or lease our paddle boat. It offers Crocodile pond tour where an expert will demonstrate you tour around a captive-bred bask of more than 200 crocs ranging from child to grown-ups. The indoor, independently directed ‘Snakes in Transit’ display includes a noteworthy gathering of the neighborhood and outside snakes. In the crocodile cage diving, you can take the adrenalin rush in the next level by sharing a lake to about six grown-up Nile crocs. Encouraged by African Croc Dive, crocodile cage diving is an exciting close experience that incorporates security instructions and all plunging hardware. It happens in a solid and open steel confine that is encompassed by water on all sides. You’ll go through around 20 minutes in the crocs’ watery natural surroundings and will get the opportunity to see them both sustaining and resting.

Suggested Read: 8 Picturesque Waterfalls In Cape Town That Will Make Your Jaw Drop To The Floor

Image Source
‘Tygerberg Nature Reserve’ in the northern rural areas of Cape Town is one of a few internal cities holds overseen by the City. This is a small reserve. This wildlife reserves in Cape Town safeguard Tygerberg Hills which is in the northern outskirts of Cape Town. The hills ensure the protection of highly endangered ‘Swartland Shale Renosterveld.’ The reserve is the shelter of bontebok. There are 562 distinctive plant species inside the little hold. Of these twenty-three are Red rundown species, eight are discovered just in Cape Town, and three are prevalent to the hold. There are likewise over a hundred South African Birds and an assortment of wild warm blooded animals, reptiles and frogs.

Further Read: 10 Romantic Cafes In Cape Town That Every Couple Must Visit

Urban Wildlife places in Cape Town are one of the places on the planet consisiting a different variety of wildlife. Guests from all around the globe slide on the city to explore the enormous assortment of natural life. Visitors witness animals like snakes, tortoises, lizards, and small mammals which include hyrax, cape clawless otter, four-stripped grass mouse, and fallow deer, water mongoose. During your visit to South Africa take a tour of wildlife in Cape Town and treat yourself with the remarkable wildlife memories.

What is the best time to see the Wildlife in Cape Town, SA?

March to May and from September to November are the best time to witness the wildlife in Cape Town, South Africa. These are pleasant months and you can see more animals in their natural state during these seasons.

Is it safe to take a wildlife tour in Cape Town?

Yes, South Africa is popular for its number of National Parks. It is most safe to take a guided tour inside this Parks as a wildlife tour in Cape Town.

Which flightless birds is Cape Town famous for?

Is Table Mountain safe for trekking to see the wildlife of Cape Town?

Yes, a few parts of the Table Mountain come under the national reserve area of South Africa. Its national park is the best place to trek and see the wild flora and fauna of Cape Town.

Who are the only black and white friends found in Cape Town Beach?

The famous African Penguins are mostly found near the Cape Town beach during the summer. They are found less in numbers during the winter as they dive into the sea for food hunting.

Is there any wild animals found near Cape of Good Hope point?

Yes, you can sight many Caracals, spotted genet, and Mongoose in the Cape of Good Hope point in South Africa. They are harmless wild animals. You can see them in their natural state on the creek and shore.

Is the Cape Town best for bird lovers?

Yes, you must visit World of Birds Wildlife Sanctuary in Cape Town. It is near to Hut bay. Here, you can find more than 300-varieties of birds. Most of them are native African birds.

Shopping In Cape Town: 13 Best Places That Are A Shopaholic’s Retreat

Austin Wildlife: 5 Superb Places To Spot The Exotic Flora & Fauna In The City