Dedicated To The Iron Man Of India, ‘State Of Unity’ Becomes The World’s Tallest Statue In India 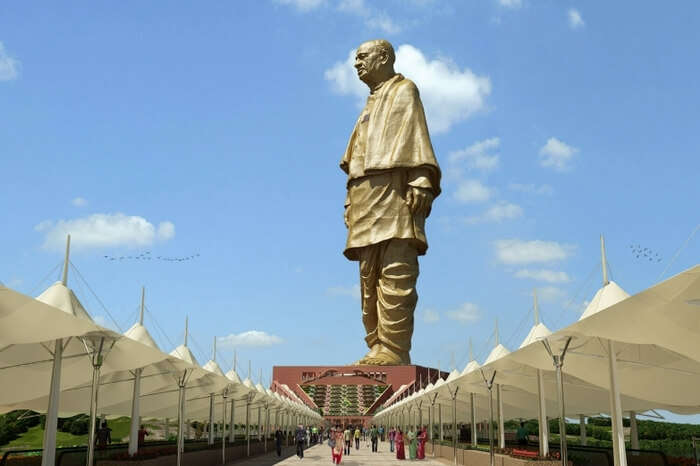 You now have a new reason to visit Gujarat for the construction of the world’s tallest statue in India, ‘State of Unity’, is finally completed. The 182 m tall Neoclassical colossal, which is a tribute to the freedom fighter Sardar Vallabhai Patel, is all set to be inaugurated today on the occasion of his 143rd birth anniversary.

The ‘State of Unity’ monument is three times larger than Christ the Redeemer in Rio de Janeiro, Brazil and almost double the size of the Statue of Liberty in New York. In fact, it has even surpassed the world’s tallest, China’s Spring Temple Buddha, by 177 feet.

The gargantuan statue is built on Sadhu-Bet Island in Narmada District, the birthplace of India’s Iron Man – Sardar Vallabh Bhai Patel. Began in December 2013, it took more than 250 engineers and 3,400 laborers to complete the statue with a cost of approximately INR 2,900 crores. The hardcore structure of the metal statue can withstand high-velocity winds and severe earthquakes.

Suggested Read: 10 Historical Places In Gujarat That Uncover A Legendary Past

What’s in for the tourists?

Not just a metallic marvel, the chest of the statue, 193 m above the ground, has a standing area which can accommodate 200 visitors at a time to give them a bird’s eyes view of Sardar Sarovar Dam, Narmada River, and the Shoolpaneshwar Wildlife Sanctuary.

The team will also build a hotel, convention center, and a memorial garden near the statue for tourism and recreational purposes. There will also be a Laser and Sound Show projecting the unification of India.

Currently not an island, the area will restore its original condition once the construction of weir is finished. Ferry rides will be launched to take visitors to the statue.

If you have been looking for reasons to ‘Kuch Din to Guzaro Gujarat Mein’, here is one more. Literally, an enormous one!

Further Read: 11 Best Places To Visit In Vadodara That Take You Through The Historical Past Of Gujarat!