30 Creepiest Abandoned Places In The World: Ruins Of A Forgotten World 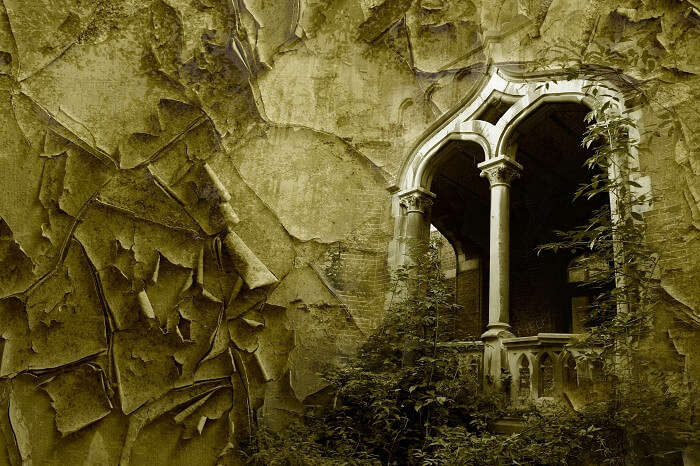 Francis Bannerman VI built a huge storing space after buying the American military surplus from the Spanish war. However, much of the castle was destroyed following a massive explosion of ammunition in 1920. Thereafter, the remains of the castle were abandoned.

The elegant New York castle was designed by architect Bradford L. Gilbert for his Scottish wife – Anna Dundas. But even before the completion of the structure, Gilbert died and Dundas committed herself to a sanatorium. So, though none got a chance to live in it, there are legends about the ghost of Dundas that roams through the halls of the abandoned castle.

The Count Liedekerke Beaufort, a Belgian political activist, was forced to leave his home and move with his family to a neighboring land during the French Revolution. In 1866, the English architect Edward Milner was commissioned to build a summer home. But before the castle was completed, Milner died. Thereafter, the castle served as a camp for the Nazis during World War II, a holiday camp under National Railway Company of Belgium, and an orphanage. Finally, the castle was abandoned in 1991 due to the high maintenance costs.

Built in the mid-1400s, Kilchurn Castle has served as the home to some of the most powerful people in Scotland. But despite its striking location, it was abandoned in the 1700s and remains to be only a prime photography location.

Built in the 14th-century East Sussex (England) to protect the area against the French, the castle survived several wars before it was finally abandoned. Today, it stands as a popular tourist attraction in England.

The 19th century palatial Witley Court never managed to fully recover to its former glory after the devastating fire of 1937. After some restoration to the huge estate, this otherwise abandoned place now serves as a tourist place. Visitors can wander through the gardens and see the large fountain of Perseus and Andromeda.

A little off the coast of Marco Island in Cape Romano (Florida), the Dome Homes is a structure that was built as a vacation home. However, the alien-spacecraft-like structure eventually became abandoned following a series of hurricanes and the declining coastline.

The small hill town in Basilicata (south Italy) came into existence in 540 AD. But the town’s location ultimately became the reason for its downfall. Due to the poor agriculture, the landslide of 1963, the flood of 1972, and the continued instability of the slope on which the town was located, Craco was eventually abandoned totally by early 1990s. However, it was seen again in the popular movie The Passion of The Christ.

Nestled among the Taurus Mountains, Kayakoy town in Turkey has been deserted since the 1920s due to the political population exchange with Greece. With over 350 vacant homes, it is one of the popular abandoned places in the world.

Established by Henry Ford – the founder of Ford motors – in 1927, Fordlandia was intended to be a huge rubber plantation in the Amazon forest. Ford planned a corporate city surrounding it with every kind of imaginable luxury. Swimming pools, a golf course, bungalows, and even a place for practicing national American dances – all these were supposed to be a part of the corporate city. But the idea of liquor ban infuriated the native workers who threw the cars into the river and chased away the managers into the jungle in 1930. Since then, the city has been abandoned.

Varosha was a modern tourist area in the early 1970s in north Cyprus. Its luxurious beaches and hotels attracted celebrities including Brigitte Bardot and Elizabeth Taylor, who took sunbaths right on the Varosha beach. But, with the invasion of the Turkish in 1974, things changed drastically and the entire population fled the area in fear of a massacre. Ever since, due to tense political situations, the area has remained abandoned.

The Chernobyl Nuclear Power Plant disaster of 1986 caused a city-wide leak of nuclear radiation. Once a township of thousands of plant workers and their families, Pripyat had to be evacuated immediately.

The erstwhile tourist village of Villa Epecuén on the shores of Lake Epecuén was very popular during the 1920s – early 1980s. However, when the dam holding back the lake’s waters failed in 19085, the entire village was flooded. Though the water receded, what remained of the village has been abandoned since then.

The town was founded in 1908 in the Namib desert by German settlers looking for diamonds. However, the resources were exhausted by mid-1950s and the town was abandoned thereafter. Today, the homes are filled high with sand that provides an eerie, but striking, image to the town.

Sanzhi, the city of the UFO houses in Taiwan, was developed as a vacation destination for the US military officers returning from their positions in Asia. But the unfortunate car accidents & the loss of investments forced this site to close down in 1980. The structure too were torn apart entirely in 2010.

It was in 1876 that miners discovered rich deposits of gold and silver in the town. But the city soon gained the reputation of a ‘sin city’, owing to its myriad brothels and hop joints. And it wasn’t long before it finally went bankrupt in the 1940s and become one of the best well-preserved ghost towns in the world.

Located on the Yangtze River in China, the fishing village of Gouqi island is known for the lush buildings covered in greenery and ivy.

The erstwhile British administrative center for the Indian Penal Settlement, Ross Island was an abandoned island in southern Andaman until recently. It is now maintained by the government and is a major tourist attraction in Andaman. The graveyard and the ruined church provide an eerie feeling to this abandoned island.

Once a lush island occupied by a large population, the Hirta Island has remained abandoned since the 1930s due to the threat of starvation and the harsh weather conditions.

Popularly called the Battleship Island, the Hashima Island was home to a coal mining facility, a hospital, a school, and numerous restaurants during its prime time (late-19th century to mid-20th century). However, they are all in a dilapidated state today.

The Island of Dolls is situated on the outskirts of Mexico City. The story speaks of the island’s former caretaker who discovered a dead girl in the canal bordering the island. In order to appease the dead girl’s spirit, he began collecting dolls from the trash and hanging them up throughout the island. Strangely, the dead body of the caretaker was found in 2001 in the same spot where he claimed to have spotted the dead girl.

Located in the Venetian Lagoon of Italy, Poveglia island became a dumping ground for plague victims under the rule of Napoleon Bonaparte. It was, then, converted into an asylum for the mentally ill before it was abandoned altogether.

Designed to be Beijing’s answer to Disneyland, the Wonderland Amusement Park could become nothing more than one of the abandoned places around the world. The land prices led to the halt in construction in the year 1998. The land area is partially being used by local farmers to grow crops. There are also plans of demolishing the abandoned structures to make space for a shopping centre.

Dadipark was one of the chic amusement parks in Belgium that got shut down over a decade back when a young boy lost his arm in one of the rides. Despite numerous leaks about its renovations and reopening plans, all that the park has seen so far is rust, graffiti, and underground skating parks.

Inspired by the Disneyland, the Nara Dreamland Park was opened in 1961 but was shut down by 2006. Ever since it has held one of the spooky-looking abandoned places in the world.

Opened in the then-Soviet-ruled East Berlin in 1969, Spreepark was the only amusement park in the region back then. With the passage of time, the wall fell and bigger & better parks opened up. Subsequently, the amusement park was shut down in 2001 and has remained abandoned ever since.

Opened in 1997, the Gulliver’s Travels Park in the Kawaguchi region of Japan could not last any longer than 10 years despite the financial aid from the Japanese government.

Other beautiful abandoned places in the world

Built in 1911, this SS Ayrfield retired in 1972 and was dumped in the ship graveyard in the Homebush Bay (west of Sydney). But the majestic mangrove trees and the greenery sprouting out of the vessel make it stand out from the rest.

Once a luxurious hotel, Tequendama Falls Hotel was built in the early 1920s in the city of San Antonio del Tequendama. But with the passage of time, the Bogota river became contaminated and the tourism declined. Eventually, the hotel was shut down and is now believed to be haunted.

Don’t these pictures just give you goose bumps? And if you still haven’t had enough, there are more such abandoned places in the world that you might want to check out. Have a look!

Further Read: 25 Spooky Real Locations That Would Make Ideal Horror Movie Sets, We Dare You To Visit Them!

Goa Carnival 2022 Is Here To Make You Go Bonkers