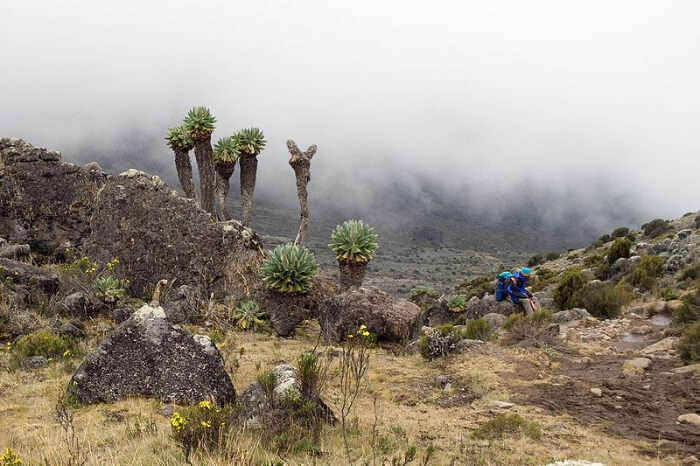 Tanzania is a land of wildlife sanctuaries, rainforests and the best trekking and hiking trails of Africa. Tanzania offers short hikes and long treks through volcanoes, craters and high plateaus based on one’s capability. In short, there is something for everyone who dreams of trekking in Tanzania. Here is a list of those trekking trails one can go through before getting on an adventurous holiday.

Best Time For Trekking In Tanzania

One can visit Tanzania for a safari or trekking all throughout the year except during the rainy season. January-February gives a clear and glistening view of the mountain peaks. With little pockets of rain that is carried forward from the November rainy season makes this period a little off season to trek the mountains. The most popular time for trekking in Tanzania is between July and October.

10 Best Trails For Trekking In Tanzania

The climb to these spots offers a perfect opportunity to see the wildlife such as giraffes, colobus monkeys, baboons, elephants and antelopes. Here’s a list of the 10 best trails for trekking in Tanzania:

It is the world’s tallest freestanding volcanic mountain and the highest mountain of the African continent. One of the seven summits of the world, Kilimanjaro stands at 5895 meters above sea level. It has seven official trails that leads to Uhuru peak at the Kibo Crater. It is located in the Kilimanjaro National Park and the trekking trails provide different views every day as one goes higher.

Marangu route is the most popular trekking route to climb up to the Uhuru peak and is commonly called as the tourist route. It starts from the South-east side of the mountain and is the only mountain that offers dormitory style sleeping huts for the climbers. Trekkers come across steep slopes and lovely rainforest areas on their way up.

Machame route starts from the South-west side of the Mountain and is considered to be one of the best trekking routes in Tanzania. It is one of the most scenic routes making it a popular choice among the travellers. The descent is through Mweka path. Trekkers will reach the peak via Shira Plateau and Lava Tower. The climb has some some steep slopes, so physical fitness is expected from the climbers.

Lemosho is the most difficult route to undertake the climb to the Uhuru Peak making it the least used trail. The route is very scenic and has the best view of sunrise from the summit. It is the longer trail that passes through Shira Plateau and merges with Machame route. It is the perfect route for experienced climbers and is one of the best hikes in Tanzania.

Duration: 8 days
Difficulty level: Difficult
Cost: INR 2,50,000
Highlights: The most scenic route and the best trekking trail in Tanzania.
Tip: Avoid UV rays as much as possible as it can cause dehydration.

The second highest peak in Tanzania stands at 4566 meters high and is the second most popular choice for mountain trekking in Tanzania. It is located 80 kms to the west of Mount Kilimanjaro in the Arusha National Park. The trek up the mountain is short compared to Kilimanjaro but a steep one. The climb to the Mount Meru offers a perfect opportunity to see the wildlife such as giraffes, colobus monkeys, baboons, elephants and antelopes.

Though most of the trekking in Tanzania are up the mountains, Ngorongoro Crater Highlands are more of a shallow wide open bases up the volcano. This conservation area has the highest density of wildlife in Africa. One often crosses paths with gazelles, gnus, black rhinos, tusker elephants, lions, leopards and buffaloes here. Olmoti Crater hike is a short trek to its rim that takes about 40 minutes to ascend. The hike starts from the Nainokanoka village at the shoulder of the ancient caldera. It is a pleasant climb past the Munge waterfalls to the crater and the view from there is extraordinary.

Duration: 1 day
Difficulty level: Easy
Cost: INR 1,46,000
Highlights: The view of the source of the river Munga.
Tip: Mental preparation for a hike is important.

Situated deeper in the conservation area, Empakai hike offers the view of zebras, antelopes and flamingos along the way. It is a long but a fun hike to the Embulbul depression where the most beautiful lake can be found. It is about an hour hike up to the 2743 meters high Crater’s rim and takes about half an hour to descend the steep slopes.

It is an active volcano and is often referred to as the ‘Mountain of God’ by the locals. The trail up the volcano is quite steep with sand and loose rocks. The trek offers a stunning view of the Lake Natron, plains of Serengeti and the Acacia forests. Make sure to wear proper trekking shoes and carry a trekking pole, although the latter is not mandatory.

Udzungwa Mountains National Park houses many endemic species of wildlife such as Kipunji Ape, Iringa red colobus monkey and Udzungwa Partridge. The 38 kms hike up to the Mwanihana Peak takes one through lush forest and a large bamboo landscape leading to Sanje waterfalls. Trekkers have an opportunity to take a dip at this waterfall before continuing the ascent.

The Pugu Hills Forest Reserve is located 20 kms Southwest of Dar es Salaam. The river Msimbazi flows through this coastal forest into the Indian Ocean making it a main thoroughfare for endemic birds migration. The hike through this forest is about 4 hours and is very picturesque. Make sure to take a lot of photographs along the way.

The United Republic of Tanzania is the largest east African country surrounded by a chain of mountain ranges including Mount Kilimanjaro and the great three lakes of Africa. The country is a basket of nature’s beauty and fury. For a fun hike or professional trekking in Tanzania, book a trip to Africa. Enjoy hiking to the top!

Q. What are the most popular trekking trails in Tanzania?

A. If you are looking for trails for trekking in Tanzania, then you are in luck because the country boasts of trekking trails that are perfect for both beginners and experienced trekkers. Most of the trails take you to Mount Kilimanjaro, namely, Marangu Route, Rongai Route, Machame Route, Lemosho Route, and many more.

Q. Which trekking trails in Tanzania are perfect for beginners?

A. Several trails in Tanzania can be availed by beginners as well, including Rongai Route, Marangu Route, Ngorongoro Conservation Park trail, Empakai Crater, and many more.

Q. How much time does one take to climb Mount Meru?

A. The time permitted to climb Mount Meru is twelve hours. So, you have to complete the entire trekking to Mount Meru within the said time.

A. Yes, anyone can climb Mount Kilimanjaro because the sloping is quite less compared to other trekking trails.

Q. What is the apt time to go on a trekking tour to Tanzania?

A. You can go on a trekking tour to Tanzania between January to March and June to October.

Q. How much will it cost to go on a trekking trip to Tanzania?

A. It totally depends on the trekking trail, but usually, the trips start for INR 1,90,000 though some trails in Tanzania cost more than INR 200,000 per person.

Q. How many days would one take to reach the top of Mount Kilimanjaro?

A. If you are a veteran trekker, it will take you six to nine days to reach the summit of Mount Kilimanjaro.

Q. What is the most popular trail to Mount Kilimanjaro in Tanzania?

A. Though several trails would take you to Mount Kilimanjaro, the most popular among them is the Machame route. This route is not only the easiest, but it helps you to help you reach the top with minimum inclination. Other trails like the Shira route, Lemosho route, and many others are quite tight since they have high preferences.

Tungnath Trek In 2021: Important Points To Remember Before You Embark On A Journey

Trekking In Himachal Pradesh: 18 Best Routes To Put On Your Bucket List In 2021!

Trekking In Munich: Embark On These Trails To Find Some Peace Amidst Nature In 2021

11 Thrilling Trails For Trekking Near Chandigarh In 2021

Trekking In Darjeeling 2021: Top 9 Trekking Routes For An Thrilling Holiday In The Tea Hills