This Water Park In Dubai Is Throwing A ‘Night Party’ Where DJs Will Play Live For You! 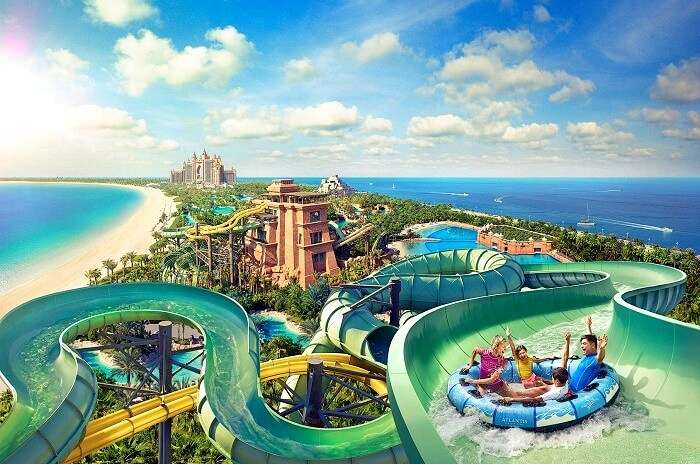 The city of Dubai believes in breaking records and its tallest building, tallest hotel, largest picture frame, and first underwater resort prove that well. Continuing its legacy of surprising tourists all across the world, now the famous Aquaventure water park in Dubai will be operating at night for a special event.

Being called as Aquaventure After Dark, the event is being organized by Atlantis, The Palm and will have a backdrop of live DJs like Shef Codes and Saif&Sound playing the coolest music in its three zones. Sounds like the first of its kind, doesn’t it? The night party at this water park in Dubai is on April 5th and will stay lit from from 7:30 PM to 11:30 PM. The event tickets for the same start from AED 95 or INR 1,680 and can also be booked in advance.

Aquaventure After Dark is being organized in partnership with Coca Cola and 104.8 radio channel to offer an experience of a lifetime to both children and adults. With over 20 water slides along with live music in the background, this fun place to visit in Dubai will surely make your holiday more memorable if you’re already tripping in the city.

Some of the interesting attractions that Aquaventure After Dark will have are a Splashers Island that will boast 7 new waterslides and a giant dry play-structure, live cooking sessions, and more. Not just this, but it will also feature the world’s largest circumference water ride – Aquaconda, the first twin racing tube rides – Slitherine, and the longest zip line circuit in the city.

This news seems like it’s going to be the best ‘night party’ in Dubai ever! So, if you are already holidaying in the city or are planning to fly to Dubai for a trip this week, make sure you reserve your Thursday for an evening full of fun and thrill!