5 Top Beaches Near Osaka For All The Seaside Lovers In 2022! 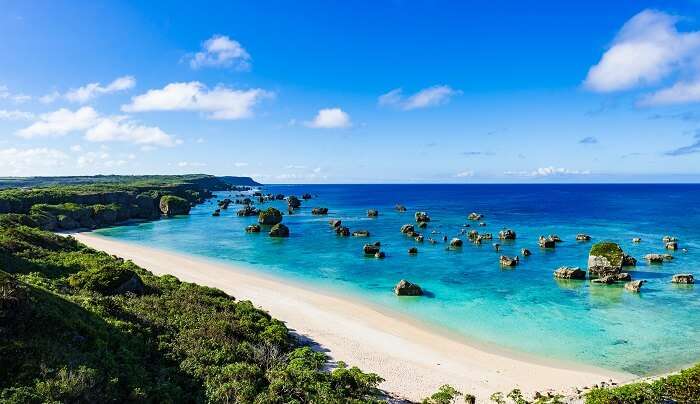 Osaka is a metropolitan city in Japan that is known for its towering buildings, cherry blossom trees and happening nightlife with amazing street food. The city also boats of sandy and pristine beaches that surround the city in an amazing pattern. The beaches near Osaka are the best ones as rated and hailed by the locals and tourists. These beaches offer enticing views and electrifying activities that will let your adrenaline soar through the roof. So, check out the best beaches near Osaka Japan that will let tourists experience the marine and reef life of Japan.

The beaches around Osaka are rich in adventurous activities and natural rock-cut caves an cliffs. Take a look at the top 5 beaches near the city that will make your trip memorable!

Nishikinohama beach is one of the best beaches near Osaka. It is known for two things, first, the beach is highly accessible as there are numerous trains and cabs picking and dropping off tourists and locals at any time of the day. Second, the word ‘Nishiki’ means ‘Two Colors’ indicating the contrast set because of the striking and distinct colors of the pine groves and white sandy beach that leads to numerous pictures taken on the scenic beach. There are various activities that visitors can undertake to while away their time on the beach, like jet-skiing, windsurfing or simply taking a bath on the pristine waters of the beach.

Must Read: 13 Things To Do In Osaka To Have A Great Time At The Japanese Port City

Omimaiko Beach is one of the good beaches near Osaka. This is strategically situated in the largest freshwater lake in Japan called ‘Lake Biwa’. This beach is near Osaka city and takes approximately three hours to travel to and fro. The beach has a modern touch to it with its various shopping stalls and sophisticated crowd. However, the pebble-filled beach also emits an environment-friendly aura that lets visitors enjoy sunbathing and watching the sun go down in the west. The beach is a must visit as it is surrounded by Hira mountains and Lake Biwa which makes it a three-in-one tourist exploration spot.

Tokimeki is one of the amazing beach resorts in Japan. It is one of the swimming beaches near Osaka and could have been a part of the city if it had not been located in the southernmost tip which led the beach to be declared as a beach in Misaki town. The beach is famous for its exhilarating activities like beach volleyball, clams in the sands and swimming in the safe waves. Tokimeki beach also has living accommodations right next to it that lets tourists relax for a day or two in the same city before setting off on another sightseeing expedition. So, take a walk along the Tokimeki beach and wind down at the sound of the crashing waves while letting the sand run through your fingers.

Isonoura beach is one of the activity based nice beaches near Osaka, Japan. This beach is a haven for windsurfers and jet ski enthusiasts. It has a separate section for all of its activities. However, surfing is the most popular and in-demand activity. The beach also has barbeque stands and cafes in close vicinity that lets tourists rejuvenate themselves after taking part in the exhilarating activities. Isonoura beach also allows its visitors to easily travel to other cities in Japan with the various intercity buses available right outside the resort area. It is important to take care of the jellyfishes that make their way onto the sandy and picturesque beach, please be equipped with suitable footwear accordingly.

Suggested Read: 10 Water Parks In Japan Your Family Will Surely Love To Spend Time At!

Kotohiki beach is one of the hidden beaches near Osaka. The beach’s not-so-crowded atmosphere has also influenced the locals to declare it as one of the best beaches near Osaka Japan. The beach has rock cut cliffs and golden sand that acts as eye candy for nature lovers. Visitors can take a walk, explore the cliffs and caves, and swim in the pristine blue waters. The beach is not visited a lot by the locals as it is well hidden and created due to natural external factors. So, while roaming around the bustling streets of Osaka, do not forget to drive downtown and drop by the Kotohiki beach to relax while feeling the cool breeze blowing at your face.

Osaka is a city that is known for its high rise buildings, autumn season and various shopping centers. However, it is the beaches near Osaka that will steal and melt every tourists’ heart, mind, and soul. These beaches deserve an exclusive visit during an eventful vacation because this is where the Japan parties and relaxes because of the perfect combination of invigorating activities and gently crashing waves. So what are you waiting for? Gather your family and friends and plan a trip to Japan and do not miss out on the beaches in Japan near Osaka that will let nature and beach lover in you rejoice!

Q. Are there any beaches in Japan?

A. Yes, there are many beaches in Japan like Yuigahama, Enoshima, Oarai beach and more.

Q. What is the cheapest time of year to fly to Japan?

A. October is the cheapest time to the year to fly to Japan.