Berlin VS Munich: Which One Is The Most Ideal Holiday Destination 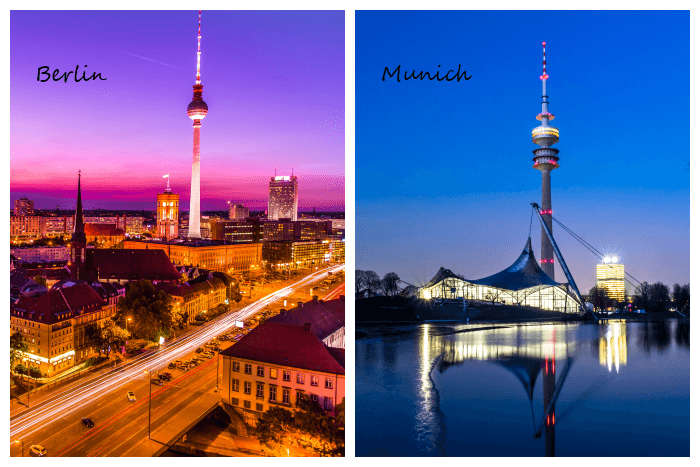 This article of ours is devoted to two places, Berlin and Munich. Well, it would probably be difficult for you to decide as to which way you should head to as both the places are good in their own respective ways.

Berlin is quite famous for its Berlin wall and the people here are known for their outspokenness, characterized locally as ‘Berliner-Schnauze’. Munich, on the other hand, is known for some really cool and artistic pieces of architecture, annual Oktoberfest beer celebration and its lively culture!

Before you get more confused while indulging in brainstorming sessions with your fellow travelers on Berlin vs Munich, we would like to help you choose the best by offering some analytically researched characteristics of both the places. 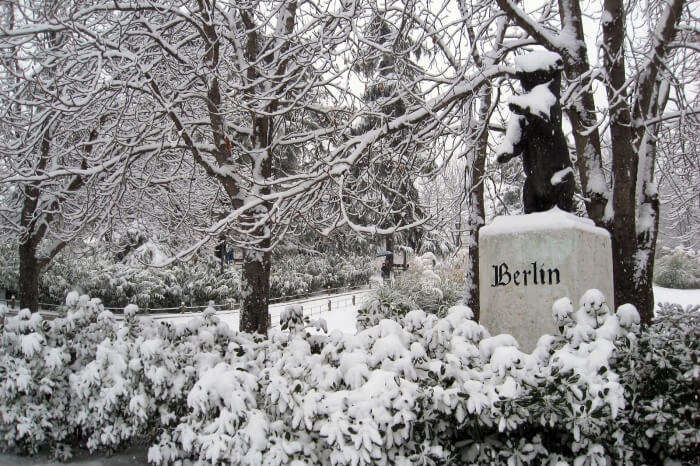 The winter season in Berlin is harsh and the streets and markets aren’t as lively as they are during the month of March, which could also be the best time to visit this city. But one thing that marks the winter season of Berlin is the amazing discounts and low prices of the flights available in this season.

On the other hand, the best time to visit Munich is from March to May when the summers are not very warm. Except for the month of December and January this place is amazing enough to make a visit to at least once! 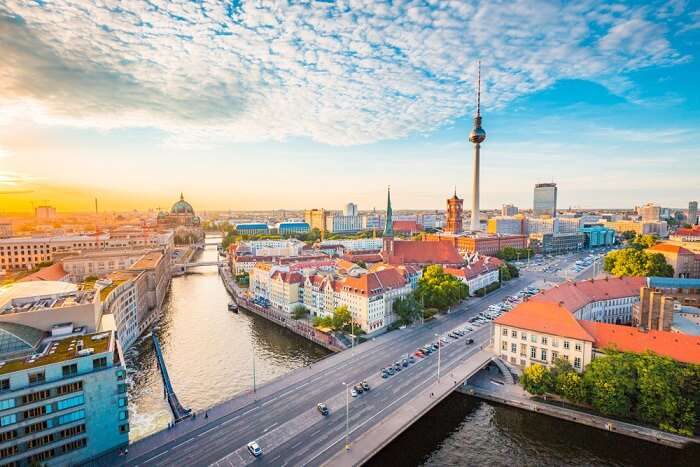 Though Berlin witnesses coldest nights during December, the festive vibes manifested by the dazzling streets and happy faces make you don’t want to leave the place. The temperature starts to rise with the arrival of the month of March, allowing you to be a witness to the amazing places of Berlin, including the most famous Berlin Wall as well.

Though being home to various museums and artistic buildings, Munich is also all set to help your party spirit take a high note with its Oktoberfest beer celebration. The most famous beer hall founded in 1589 has made it one of the most sought after places.
To get a better picture, know more about the cities by browsing through the facts enlisted below and decide for yourself – Berlin or Munich, which is better.

Places To Hang Out In Berlin

When you try to explore the city of Berlin, then do not forget to miss visiting these prominent places listed below that make this destination worthwhile. 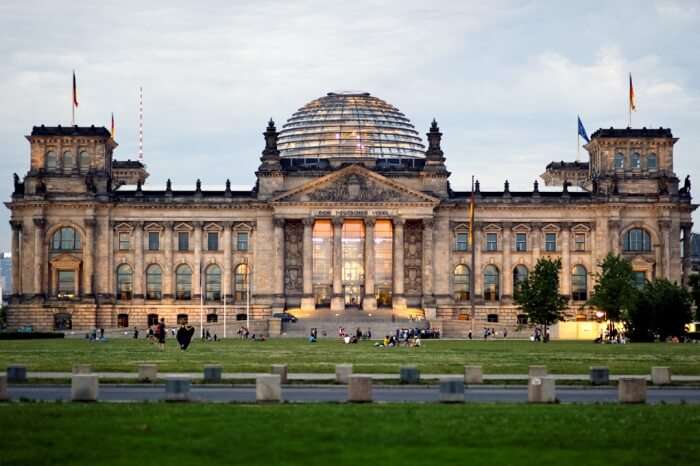 The building is located in Platz der Republik 1, 10557 Berlin, Germany. The Brandenburg gate is the main area towards the north of which the Reichstag Building is situated.

German parliament is located in this famous building and has been the seat of the Weimar Republic government. The place was so until the Nazis in 1933 cease and took it under their control.

Must Read: Berlin In December 2022: A Guide That’ll Help You Discover The Eclectic City In A New Light

2. Memorial of the Berlin Wall 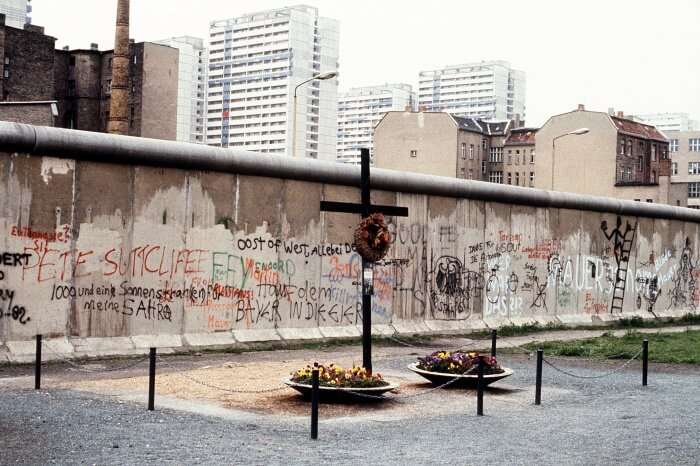 Berlin, a city in the country of Germany is famous and well known for its Berlin Wall. Located in Bernauer Strasse 111, 13355 Berlin, the place is ranked second in the list of more than thousands of places to be visited in Germany.

This place is the memorial of the great German division scenario. The place is located in the heart of the country which is why it is considered to be the most attractive place in all over the city. From the former border strip, it extends till 1.4 kilometres. 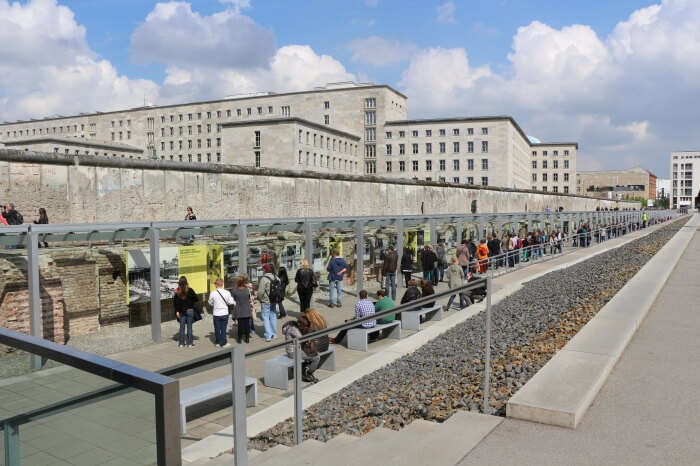 Rated as the third best thing to do in the whole wide area of Germany, the place is located in Niederkirchner straße 8, 10963 Berlin. No doubt, people from all over the country and even world visit here to witness the Nazi reign of terror which is exclusively explained by the local guides and the audio help available!

Since the year 1987, this place has been made the national headquarters of the police where the information is passed on from and received. 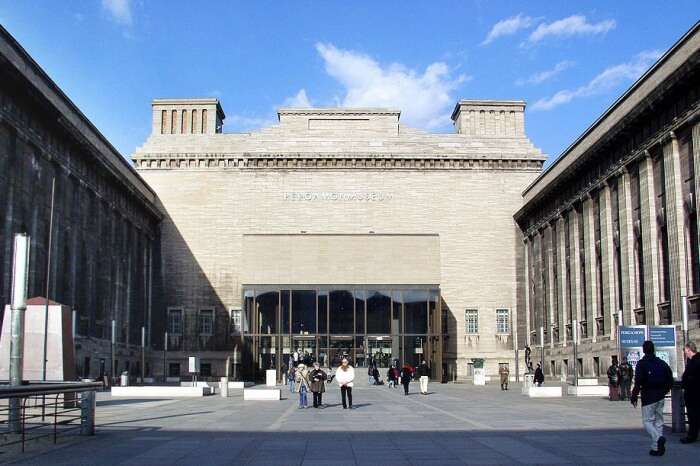 The Pergamon Museum is a three-winged complex. The exhibition hall is a house to three of the Staatliche Museen Zu Berlin’s accumulations: the Antikensammlung, Vorderasiatisches Museum, and the Museum fürIslamische Kunst.

The amazing reproductions of huge archeological structures –the Processional Way from Babylon, the Ishtar Gate, Market Gate of Miletus, the Pergamon Altar, and the Mshatta Facade – have contributed enough to make this museum popular all around the world. 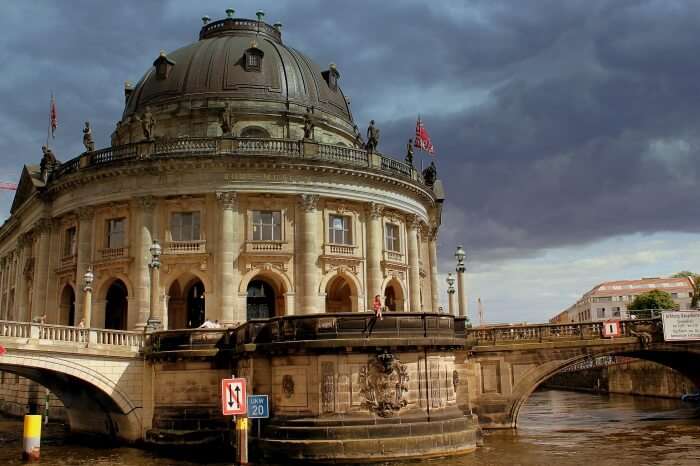 Located in Breite Street, 13089 Berlin, this place known to be the home for three famous museums namely, the Pergamon, the Bode, and the Altes that are keeping the art protected since long time.
The best thing about this place is that one gets to visit and have an experience of three variant places in one go!

Places To Hang Out In Munich

This German city is known for its rich culture and history, holding all the travel enthusiasts spellbound with its glory. Each place speaks for itself and is attractive enough to entice you to revisit. 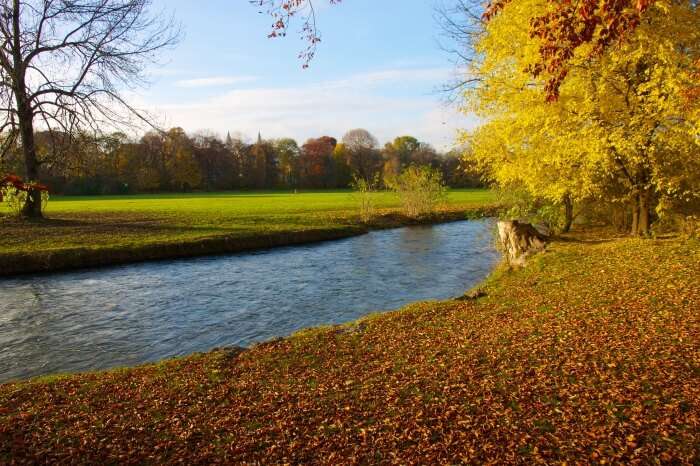 Located in 80538 Munich, Bavaria, the place is very scenic and provides fresh air one would require after being away from home town! The place is also known to have the very famous Greek temple, which is popularly known as Chinese Pagoda.

The presence of Japanese tea house makes it a lit place to be visited in the morning while sipping a cup of tea. 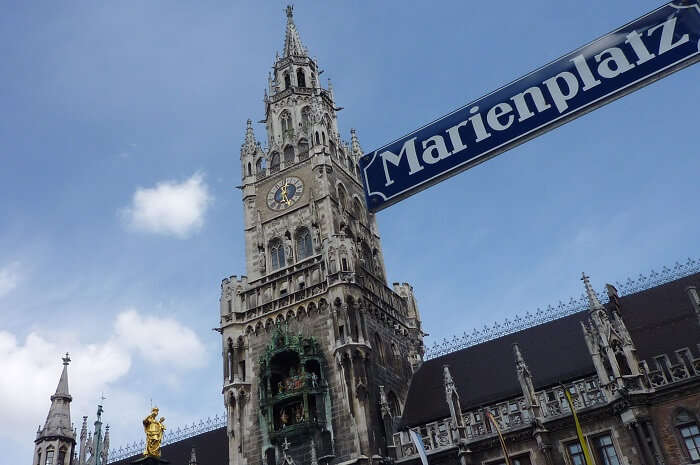 Being located in Marienplatz 1, 80331 Munich, Bavaria, Germany; this place is given the honor of being the largest square in the whole of Germany. Being famous and in the center location, this place is also the busiest and considered to be main occupation center of the country.

Not only in the current few years, the place has been known to be the prime center of this place since its long and entertaining history.

Suggested Read: 10 Day Trips From Munich That Are Worth Taking Once In 2022! 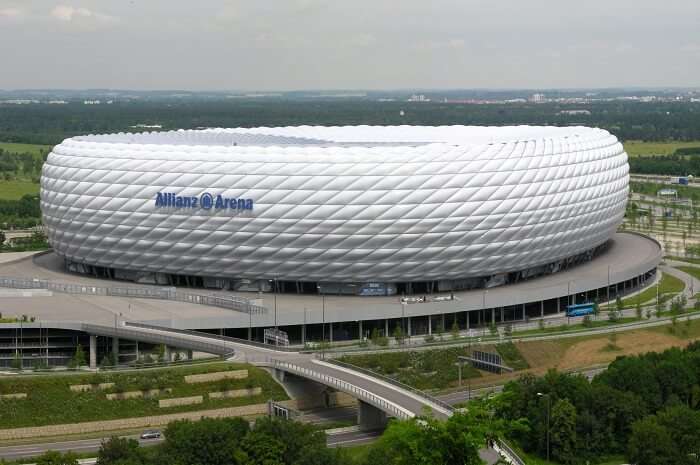 Nesting in the Werner-Heisenberg-Allee 25, 80939 Munich, this place inspires people with its amazing construction and the architecture. This is one of the amazing courts one would get to witness in Germany.

The availability of few shops nearby can help you satiate your hunger and get more comfortable in the place while getting to enjoy your most favorite game or play! 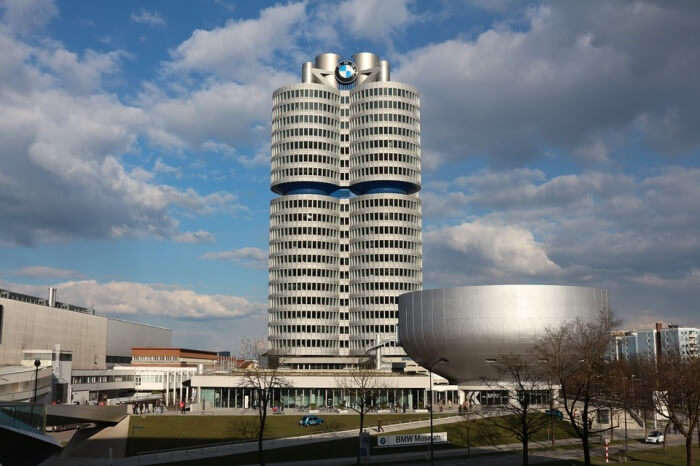 The place is a sure attraction for tourists due to the availability of two locations nearby: one being four cylinder tower of BMW and the other one being bowl-shaped museum.

The main theme of the museum is to highlight the development on the technical grounds happened in the cars and motorcycles while providing some of the important facts about the company. 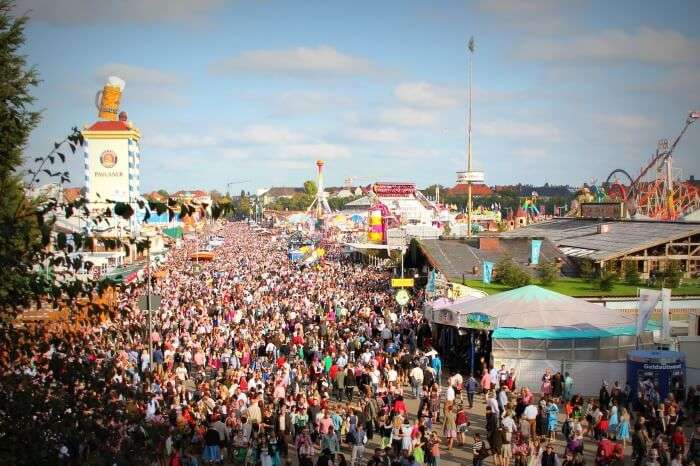 A rowdy festival of Bavarian culture, Munich’s Oktoberfest is one of the world’s most seasoned, greatest, and longest gatherings. Going back to 1810, the occasion nowadays commences when the civic chairman taps the principal barrel at twelve on the third Saturday of September.

Somewhere in the range of 6 million revelers put in the following 16 days clinking and drinking 1-liter beer steins, eating frankfurters and raw pretzels, and whooshing through the air on board festival rides. In fact, a society celebration as opposed to a brew celebration, Oktoberfest includes a lot of merrymakers, in customary lederhosen and dirndl dresses, belting out old Bavarian melodies in goliath tents and lager gardens.
Notwithstanding clothing however, anybody is welcome to connect arms and join the good times.

Further Read: 15 Best Things To Do In Munich In 2022 For Treating The Culture Vulture In You

It is now proven that both the German cities are amazing in their own ways and choosing one can be a task. However, when planning your trip to Germany do not forget to add the above mentioned places in your itinerary when deciding on to visit either Berlin or Munich for holiday.

When to visit Berlin and Munich to see snow?

The winter season in Germany is from January to April. During these months, you can find snow in Berlin and Munich.

When is the right time to visit Berlin for Beer tasting?

The beer lovers must visit during the Oktoberfest. This is an annual cultural celebration, which takes place from September last week to the first week of October.

Berlin-vs-Munich, which is the best one to take a city tour in Germany?

Berlin and Munich are important cities to take a tour once in Germany. They come with heritage and cultural importance.

Which is the most important historic place you must visit in Berlin?

You must visit Berlin Wall once in Berlin tour. You must reach the Berlin Wall Memorial and if possible the East Side Gallery.

Are there nightlife places in Berlin and Munich?

Yes, the tourists willing to enjoy nightlife can visit Berlin and Munich once in Germany tour. The nightclubs are open up to 01:00 AM. Bars and pubs open up to 09:00 PM.

Are Berlin and Munich safe to travel while in Germany?

Yes, both the cities are safe to travel for tourists once in Germany.

Are Berlin and Munich the best place to shop once in Germany?

Yes, you can buy authentic German products and European branded items in Berlin and Munich cities.

Can a solo woman take a tour to Berlin and Munich?

Yes, it is advisable to visit these cities under a package tour. This must be inclusive of local transportation, sightseeing and with an authorized tourist guide.

Which is the best season to visit Berlin?

May to September is the best season to visit Berlin. During this time, the weather is perfect to explore the city.

Which is the best season to visit Munich?

March to May is the best season to visit Munich. During these months, the weather of the city is perfect for planning a vacation.