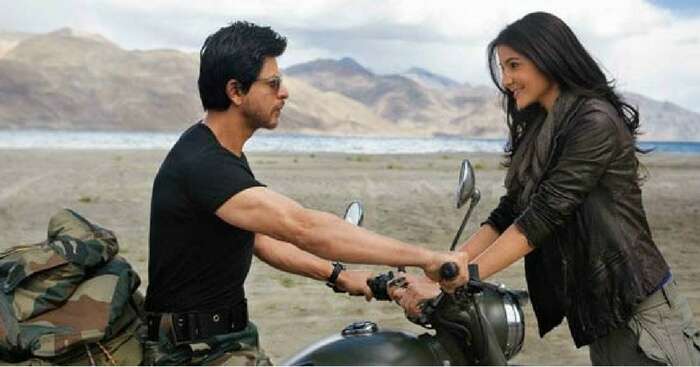 Movies are the best medium to showcase a location in an exciting way. There are several influence and importance of cinema on the lifestyle of people, out of which one is surely Bollywood shooting locations. Bollywood locations have surely increased the popularity of certain places which were otherwise not known to many people. Even heritage sites like Taj Mahal, Qutub Minar have been wonderfully captured in Bollywood movies in an enchanting way.

Discover the most famous Bollywood locations in India and plan a visit to any of these locations. Let us now take a look at some of Bollywood’s favourite shooting locations:

Located around 11km from Jaipur, Amer Fort or Amber Fort is a World Heritage Site. The film Bajirao Mastani has shot many scenes in Amer Fort. Also many other Bollywood movies like Veer, Jodha Akbar, Bol Bachan were shot here. It is one of the most famous Bollywood shooting locations in India.

Must Read: Monsoon In Jaipur 2022: A Guide To Explore The Pink City Of Rajasthan!

The lead character in the film is played by Ajay Devgn as Vijay Salgaonkar whose house is shown in some scenic locations of Goa. In fact as the story moves, he also visits Panaji for shopping. There is definitely something about Goa that attracts the directors as well as us. Goa has always been the central filming location for other Bollywood movies as well like Dhoom, Finding Fanny, Go goa Gone, Dear Zindagi and more. Old Patto bridge, Dona Paula jetty, Shantadurga temple and Aguada Fort are some of the best Bollywood shooting locations in Goa.

Suggested Read: 41 Best Places To Visit In North Goa In 2022 For A Kick-Ass Beach Holiday!

Udaipur is one of the most visited tourist places as well as popular Bollywood movie locations in India. City Palace of Udaipur is an extremely beautiful palace where some of the sequences of the film Goliyon Ki Raasleela Ram-Leela were shot. This palace has also been featured in 1983 James Bond film Octopussy. The other iconic movie Yeh Jawaani Hai Deewani was shot at the Oberoi Udaivilas in Udaipur. The melodious song at Kabira and Kalki’s grand wedding was shot at this gorgeous destination.

Athirappilly Waterfalls is a sight of heavenly beauty in Kerala. It is the location where the epic Bollywood movie Baahubali was shot. Most of the popular waterfall scenes in the movies were shot here. Also, ‘Barso Re’ from the movie Guru was shot here after which this fall became noticeable and a popular tourist destination. In fact, Athirapally Falls is the largest waterfall in Kerala, and is also known as the Niagara Falls of India.

Golden Temple in Amritsar is one of the most famous tourist destinations and a holy place. The Sikh Gurudwara also appears in many other movies and Hindi TV serials and therefore an important Bollywood movie locations. In the film Rab Ne Bana Di Jodi is beautifully captured and is the turning point in the movie.

Suggested Read: Food In Amritsar: 5 Flavorful Dishes That All Foodaholics Must Try In 2022!

The climax of the 3 Idiots Movie was shot on the banks of the beautiful Pangong Tso Lake in Ladakh. Do you know that there are other Bollywood movies films Jab Tak Hai Jaan, Dil Se, Lakshya, Bhaag Milkha Bhaag have also shot some scenes in this destination. Ladakh is a popular tourist destination amongst bikers for road trips.

Suggested Read: 5 Pristine Ladakh Lakes You Ought To Visit For A Tranquil Vacation In 2022!

The blockbuster movie Highway starring Alia Bhatt was shot in Kashmir. While visitors make the most of gondola rides and skiing in the beautiful views of Kashmir, the directors have filmed many movies in this beautiful setting. The valleys of Kashmir have always been synonymous with romance or political unrest. The trekking scene of Mission Kashmir, Yeh Jawani Hai Deewani, Rockstar and more have also been shot in Kashmir.

Suggested Read: 5 Picturesque Waterfalls In Kashmir That Will Compel You To Visit

Delhi is one of the most favorite Bollywood shooting locations in India. The romantic thriller film Fanna features Purana Qila, Humayun’s Tomb, Qutub Minar and Red fort in the first half of the film. The charming song “Chaand Sifarish” was also filmed at these locations.

Further Read: Monsoon In Delhi: 10 Ways To Enjoy The Romantic Rainy Season In 2022

Excited enough? If you’re a die-hard Bollywood fan and have always imagined yourself as a superstar in your favourite movie scenes, then do visit these exotic Bollywood locations in India to live your dream. Plan a tour of India with TravelTriangle and have the best experience of your life.

Is Bollywood a real place?

The name Bollywood is the portmanteau which was from Bombay. As opposed to Hollywood, California, Bollywood is not a place. It is not a physical place but it is the Hindi film industry of India.

What country is home to Bollywood?

Who is the biggest star in Bollywood?

Is Bollywood famous outside India?

Yes, Bollywood, in fact, the Indian cinema is famous outside India. It is the largest film industry in the world. It produced about 2,400 feature films in 2015 alone. This is over 3 times what Hollywood produces.

What are the favorite locations of Bollywood for shooting in the North?

Ladakh, Kashmir, Delhi are some of the prime locations for Bollywood movies. Ladakh was visited by 3 Idiots movie. Delhi was used extensively in shots in Fanaa.

What are the favorite locations of Bollywood for shooting in the West?

Amer Fort in Rajasthan is one of the most famous Bollywood locations. They filmed movies like Jodhaa Akbar, Bajirao Mastani, Veer was shot here. Udaipur is also extensively used for shots in most Bollywood movies.