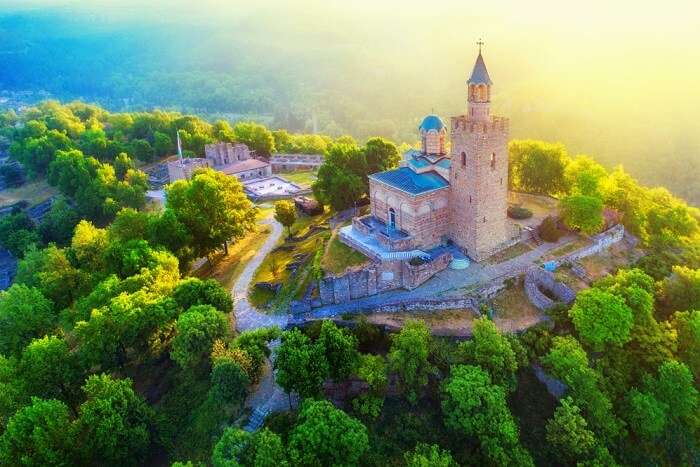 Bulgaria is a fascinating place for visitors, running from the Balkan mountains through beautiful countryside to the Black Sea coast. A melting pot for diverse cultures, Bulgaria’s history has been shaped by history’s most influential empires – Thracians, Romans, Byzantines, and the Ottomans. Besides the obviously rich culture and heritage of the country, Bulgaria is also home to some of the most stunning castles in eastern Europe, each dating back to some period of Bulgaria’s history. For tourists, these castles in Bulgaria are not only a lesson in history but also visual treats, with many castles located in the midst of the gorgeous meadows that doubt the Bulgarian countryside.

Here is a list of the most amazing castles in Bulgaria that you have to explore with your loved ones when you are touring Europe. See which ones you wish to include in your itinerary.

The Anevo hill has been inhabited since the 3rd century, although the fort that bears the name was only built in 12th century by Bulgarian nobles Voysil and Radoslav, under whom the Anevo Fortress was the center of a small kingdom. The ruins of this most stunning of all medieval castles in Bulgaria are situated only 3 kilometers from the Anevo village in the Sopot Municipality in central Bulgaria, with the legendary Strayama river flowing nearby. In its heyday, the inner city housed within the walls of the castle contained four churches, residential houses and towering fortifications, some of which stand in all their glory.

Must Read: 15 Spectacular Places To Visit In Bulgaria That Are A Treat To Your Eyes

Located in the foothills of the Bulgarian Rhodope mountains, Asen’s Fortress is a castle right out of the fairytales. Built in the 11th century(or earlier) and renovated in the 13th century, its towering walls were as high as 9 to 12 meters. The fort housed a feudal castle and, more famously, The Church of the Holy Mother of God, which has become the fort’s most recognizable attraction for tourists. For the art lovers, there are several inscriptions on the walls of the castle depicting its history. The church, besides being a marvel of Bulgarian medieval architecture, also houses gorgeous mural paintings from the period. The fort was destroyed during the Ottoman rule of Bulgaria and was restored only by 1991.

One of the most iconic of all castles in Bulgaria, the Baba Vida is located in the port town of Vidin in northwestern Bulgaria. One of the last castles of the country that are not in ruins, the castle is surrounded by two sets of curtain walls that enclose nine defensive towers, of which three are actually their original height. The 10th-century castle was built to replace the mythical Roman castle Bononia that stood at the same spot as Baba Vida. Today, the castle and its impressive fortifications feature in movies, and the fort also houses the summer theatre where concerts are held.

Surrounded by rocks and situated on the northern slopes of the Balkan mountains, the Belogradchik Fortress is one of the most enduring icons of Bulgaria. Built on the site of an ancient Roman encampment, the Belogradchik fortress is quite the sight, with the sandstone formations known as the Belogradchik rocks rising in its background. Although there is no moat here like the Baba Vidin fort, there are three fortified yards connected through various gates, and walls rising as high as 12 meters in height. Besides the drop-dead-gorgeous setting, the castle also has a lot of history associated with it.

The Byalgrad castle is located 5 miles outside of the southeastern Bulgarian village of Gugutka in the Haskovo Province. The lore around the castle fits well with the intensely scenic Bulgarian countryside in which it is located - the dungeons in the castle are rumored to have once been the prison of leather-skinned giants who had ransacked sand stocks in the city center, which the local legend tells us is required to make giant glass lenses which are used to power mythical steam generators. Sometimes called the White Castle, after the brightly colored limestone walls that fortify the castle, the fort was built in the 12th century and rebuilt by the Ottomans in the 16th century.

The Castra Martis is one of the few ancient Roman Bulgaria castles that are still standing Bulgaria. Located in the town of Kula in the Vidin district, the castra consists of two separate structures built during the 3rd and 4th century on the banks of the beautiful Voynishka river. First constructed to protect the road leading from Vidin to Belgrade going through the Vrasha Chuka pass in the Balkans, the fort consists of a quadriburg, which has been largely preserved, and the main body of the castra itself. While most of the castra is in ruins, the southeastern tower still towers to almost 17 meters.

One of the Bulgaria castles that came up with the rise of the second Bulgarian empire in the 12th century, the Cherven Castle is located 20 miles from the town of Rousse in northeastern Bulgaria. Because the fort was central to the medieval empire, it is an important site for archaeological digs, besides being a very popular tourist attraction. The well-preserved walls of the fort and the impressive battlements are quite the sight to see, set against the signature meadows and low mountains of the Bulgarian countryside. The national park that surrounds the Cherven Castle also offers some very scenic hiking trails leading up to the castle.

This is one of the historic castles of Bulgaria, built on the hill that overlooks the historic Ihtiman pass by the orders of the Roman emperor Trajan to serve as the symbolic border between the Roman province of Thrace and Macedonia. The castle has since figured in a number of important events in the history of Bulgaria - the AD 986 battle between the Byzantine empire and Bulgarian nobles happened right here at the Gate of Trajan. The impressive Roman structure is now traversed by the Trakiya motorway, the tunnel near the castle called the Gate of Trajan.

The resort town of Hisarya is famous for its medicinal and recreational hot springs today. It was perhaps its mineral springs that attracted settlers thousands of years ago - first, it was Thrace, then Hisarya was an important outpost for Romans, finally falling to ruins under Turkish rule in the medieval period. Today, after years of restoration work, Hisarya boasts of some of the most amazing Roman ruins in the country, including an amphitheater, Roman garrison, foundations of two of the oldest churches in Bulgaria, and the best preserved Roman city walls in the country.

The southern wall is known as The Camel because of damage to the middle portion that makes it look like a hump. In any case, Hisarya is a treat for tourists, with a growing number of luxury resorts coming up right next to the Roman fortifications that define the city.

The Ktenia Castle is one of the most gorgeous Roman and medieval castles in Bulgaria, located on the frontier between the former Bulgarian and Byzantine empires, near the eastern slopes of the Balkans. Located about a kilometer northeast from the Bulgarian village of Lozarevo in the Sungurlare Province, the ruins of the Ktenia Castle are a popular attraction for tourists visiting the country. The castle is part of a larger network of forts that were built to guard against invasions, and this includes Rusokastro and Aytos to southeast and east respectively. Also worth a visit are Lake Mandrensko and the beaches at Sozopol.

Further Read: Top 12 Bulgarian Restaurants That Will Leave You Spoilt For Choice

These castles in Bulgaria are some of the most amazing places to see in the country. Although most of them are in ruins, you can spend the whole day walking around these gorgeous European castles and clicking pictures with your family and/or partner. So, book your trip to Europe with us now for a beautiful and well-planned holiday in Bulgaria!