7 Beautiful Castles In Montenegro That Bring Fairytales To Life 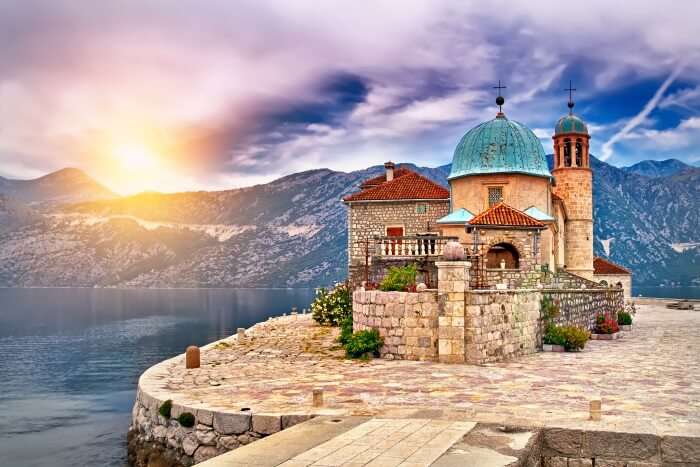 While Montenegro is a young country, still unexplored to a great extent, it is soon catching up. Tourists from all over the world are making a beeline to this beautiful little country, with its stunning coastline and mountain ranges. There are so many things one can do in this little country, but one of the aspects which will stand out from the rest are the very many castles in Montenegro. They are steeped in history of thousands of years and these castles are spread through the country.

Montenegro castles are unique as the country itself, but one thing that they have in common is that they are equally splendid and impressive. Here are our picks of the top castles in Montenegro.

The castle is also known as St. John’s Castle and is located 1200 m high on the hills of the same name. The castle was built by Justinian I, the Byzantine Emperor. From then on, the castle has stood through the test of time, where it has survived battles, bombings, and even earthquakes. The San Giovanni castle is protected by the municipality of Kotor, and along with the old town of Kotor, the fortifications of San Giovanni were included in the UNESCO World Heritage Sites in 1979 list, under the Natural and Culturo-Historical Region of Kotor. Although the castle itself is not in the best of state, the view of the Kotor Bay, from up there, is just spectacular. But, the climb up to the castle from the Old Town is not an easy one though; there is going to be a lot of huff and puff all the way up since there are about 1,350 steps that you need to climb to reach the top. It is not an easy trek at all, but the castle and the view of the bay make it worthwhile.

Must Read: These 11 Restaurants In Portugal Will Familiarise You With The Country Even More

Located in the stunning seaport of Perast, in the Gulf of Kotor, it is often called the ‘the Bishopric’, as it was a residence for two bishops, Andrija and Vicko Zmajevic, and the name place is named after the latter. The palace itself is splendid which houses an octagon-shaped bell tower, that can be seen from the other end of the town, and also a chapel dedicated the Lady of the Rosary. There is also a statue of Andrija Zmajevic, in the premise. The palace has to be reached by boat, as it is built on a rock, on the other side of the town. The stone structures and architecture is just amazing and looking at the intricacy of it, makes you wonder, how patient and talented the workmen must have been. The view from the palace is great and as you climb up a few flights of stairs, the view even gets better. This palace is said to be a museum now.

Suggested Read: These 11 Indian Restaurants In Portugal Are Ideal For Those Who Love Spicy Food

Located in the Old town of Kotor, near the northern town gate, the palace belonged to the noble family of Grubonja, after which the palace is named. It is said that the family settled in Kotor from Zadar. If you glance at it at first, it might not appear like a ‘quintessential’ castle, that you might have seen in the movies. But, a closer look at this palace is sure to awe you. Though it was reconstructed once, it still retains that charm. On the windows of the first floor, you can see a stone slab, with the monogram of Christ on it. Below it is the image of a skull and crossbones, with snakes intersecting through the skull with a mouse, rat, and turtle hovering under the skull. This is said to be the emblem of the pharmacy in the old town. The window frames of the second floor, on the other hand, remind you of the Renaissance period, with images of lion heads carved on it. The northern part of the palace leads to the entrance to the upper part of the fortress. An arch, with a medallion, within which there a winged lion of Saint Mark, forms the entrance. It is a beautiful palace in the city of Kotor and should not be missed.

Suggested Read: 10 Cafes in Portugal To Hang Out With Friends And Enjoy A Cup Of Goodness

Located in the town of Bar, King Nikolas’ palace was the residence of Nikolas I Mirkov Petrovich-Nyegosh, the first sovereign king of the country. The palace, right by the sea, has castles, chapel and also a winter garden. Once a threshold of political power, it is now a museum. The architecture of this palace, or rather a manor, is elegant and impressive at the same time. While the Big palace has an additional feature of an attic, as compared to the Small palace, both of them face the sea and the view is nothing short of amazing. You can see exhibits from the Turkish era, old furniture, national dress, royal yacht memorabilia that has been salvaged from the seabed. What is fascinating is that there is a room in this palace-turned-museum, which has been dedicated to the process of making olive oil, one of the things Montenegro is famous for. The garden in which the palace is built is as beautiful as the palace itself and you can walk around the garden as the sea breeze brushes against your face. What could be more relaxing than that!

Suggested Read: Portugal Travel Guide: Here Is All You Need To Know About This Beautiful Iberian Country

Well, this one is not a fairy-tale kind of castles but is the ruins of a castle and that is what makes visiting this place even more interesting. It is located in the town of Nikšić and is now a cultural monument. It was built by Stracimir Balšić, the then Lord of Zeta principality. The Turkish kept attacking the castle all the time, but it was rebuilt every time. In 1877, the town was freed from the Turks. Prince Nikola then decided to build a new road and also to construct a bridge over Zeta river to connect the place to the capital of Podgorica. In the process, the castle was left in ruins. The restoration works are underway, but yet the beauty of the ruins cannot be undermined and is worth a visit.

Suggested Read: 9 Ideal Hostels In Portugal For Your Next Sojourn In The Amazing Country!

This one is again a fortified town in Montenegro, about 15 kilometers from the capital of Podgorica. The castle, or rather the fortress, is said to have been the capital of Zeta under the Crnojević dynasty. You can drive up to a certain point to the castle and is not a bad drive either, with the views keeping you busy all the while. At the entrance, there are a few steps that lead up to the gate of the castle. Once you enter the courtyard, you enter a different world altogether. There are walls and courtyards that have stood strong through all this time. There are rooms with windows that are still clearly visible and have not rusted away. But, what makes the trip out there worthwhile, is the view that you get to see from atop the castle. The Skadar Lake below shines like the sun’s rays reflect on the water surface and if you stay till the evening, the sunset is spectacular too from the castle.

The town is Perast is brimming with castles and Bujovic Palace is one of them. It is considered to be one of the finest architectural examples of the renaissance era and was built by an Italian, by the name of Giovanni Battista Fontana. The main façade of this palace, which is now a museum, is facing the sea. A fascinating fact about this palace is that the stones which were used to build this architectural delight was taken from the destroyed walls of Herceg Novi. There are five balconies for this palace and there are elements of the Baroque style, which has been used extensively, which you will be witness to when you visit this place. Now, a city museum, the collections that you will find here have been donated by the locals of this town and descendants of famous families from this part of the town. The exhibits include portraits of famous seamen from Perast and arms among other items, unique to this town.

Further Read: 10 Alluring Castles In Portugal That Are Worth Paying A Visit

Castles in Montenegro are fascinating. While some are in ruins, some others have been converted into museums. In the case of the museums, they have still retained the main essence of the castles they used to be. Either way, these castles might not be like the ones that are fairy-tale like but tells you stories of the bygone eras, the battles that were won and lost and tales of the rulers of the land.