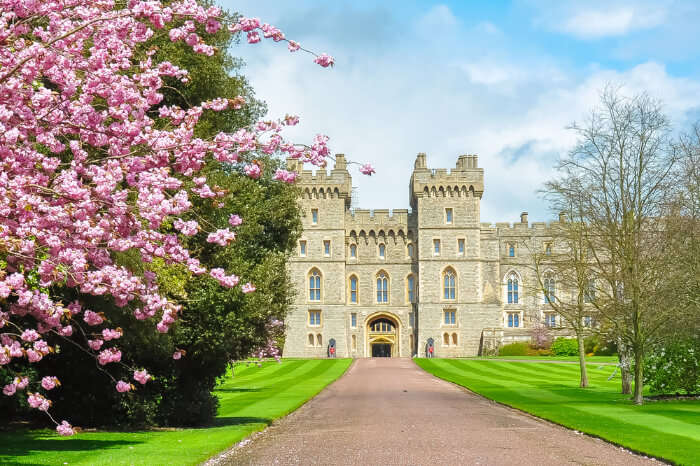 Later, the British also made many castles further inland that were not only meant to serve as fortification but also as a home for the Royals. Since the very beginning, castles around London area were an integral part of the British culture. The construction techniques and architecture of London castles and palaces will take you back to the medieval ages. Those who are genuinely interested in English heritage and culture must visit these castles.

Many castles today are either being restored or decaying slowly. Most of the castles are a few hours from London. There are a lot of castle hotels in the UK too for those who want to stay in a castle near London. Those who are looking for castles near London to stay can check into these hotels for a royal experience. Here are some of the castles to visit near London

Only an hour’s drive from London is this seventeen centuries old castle. It has two moats and is heavily fortified. It was constructed back in 1270 and built to be a medieval castle. Later, it was passed on to one of the most influential families of that time – the Boleyn family and then became the childhood home of Anne Boleyn. Anne Boleyn was one of the most colorful characters in England’s history. Boleyn was the second wife of Henry VIII and mother of Elizabeth I. Throughout the castle, you can see portraits, furniture, tapestries, and more items that are neatly preserved. You can even be a witness to Tudor possession in the castle.

Must Read: 10 Fun And Frolic Festivals In London Which Reflect The Country’s Celebrations At Its Best!

Easily accessible from London Victoria, the Leeds Castle assures the perfect day out in Kent. Constructed back in the 13th century and flanked on all sides by 500 acres of open green parklands, this is one of the best castles to see near London. It became a home to the Royals back in 1270 and was so for over 300 years. Leeds Castle is the destination for various activities all around the year. You can get to see falconry displays, Segway tours, dog collar museum or enjoy the castle itself. This castle was once home to Catherine of Argon, the first wife of Henry VIII.

When you are visiting Leeds Castle, you must go into the maze. The experience would be incomplete unless you get lost in the maze and try to find a way out. Moreover, if you can finish the maze, you will be rewarded too. Furthermore, you can also spend time punting in the moat that surrounds the castle.

Dover Castle is one of the most iconic castles in England. Just a couple of hour’s drive from London, this castle was the commanding gateway to the English empire for over nine centuries. Hence, it is also known as “The Key to England.” Located close to the sea, it has always been an outstanding defensive structure to the empire. It was built at the site of a lighthouse back in the 1180s when Henry II was ruling. For a while, it was also used to provide residence to those who came to visit England. However, later, Dover Castle proved itself to be one of the most effective castles in protecting England from foreign enemies. Even during the Second World War, the manor came to good use. The tunnels that were constructed in the Napoleonic era were used to evacuate British soldier from Dunkirk.

Suggested Read: 10 Exquisite Places To Party On New Year In London And Welcome 2019 With A Bash!

One of the most scenic castles to visit in London is the Highclere Castle. Reachable from London in less than a couple of hours, the Highclere Castle has been a famous filming location. Even the popular drama series – Downtown Abbey, was shot in this location. Julian Fellowes, the one who created the series had this castle in mind when he wrote the series. However, this Victorian-era castle has a lot more than you can see.

The 5,000-acre estate located in West Berkshire is one of the most famous castles near London to visit. This castle is still a residence and hence is only open to the public for a few days of the year. You will want to know if the castle is open before you visit it.

About a hundred years ago, this castle served as the seat of the 5th earl of Carnarvon – George Edward Stanhope Molyneux Herbert. He was famous for discovering the tomb of Tutankhamen back in 1922. When you’ll visit this castle, you can witness some unique artworks, Egyptian jewelry, and learn how George Herbert came to discover the tomb.

When you are listing castles to visit in London, you just cannot leave out the Windsor Castle. It is one of the oldest medieval castles near London, UK. In fact, it is the largest and oldest fort in the whole world and a residence to the queen of England. This is a castle near London bridge and you can get there in about an hour and a half via car by taking the bridge. Attractions at the Windsor Castle include the State Apartments that are furnished with royal artworks, the doll’s house of Queen Mary, and even the private apartments of George IV. After exploring Windsor Castle, you can also spend a couple of hours walking by the Thames and taking a tour of the renowned Elton College.

Famous for “The 1066 Story,” the Hasting castle played a significant role during the battle of Hastings. The castle is now decaying and is being used to show a 20-minute audio-visual program about the origin and history of the castle. Built by the William of Normandy, the Hastings Castle was the first Norman castle to be built in the region.

The castle had a turbulent past and later on, King Henry VIII commissioned the destruction of the church in castle. Moreover, during the second world war, this castle was bombed heavily. Therefore, a lot of it is in ruins today. Still, it is a place of great historical importance and the ruins itself are quite a popular tourist attraction.

7. The Tower of London

One of the most beautiful castles to see near London is in London itself: The Tower of London. Located in the northern bank of the river Thames, the Tower of London was founded during the Norman conquest. This was erected at the same time as that of the Hastings Castle. This building was used as a residence for the Royals and was converted into a prison later. The most notable prisoner here was Elizabeth I who later became the Queen. It is from the Tower of London that the British phrase “send to the tower” was coined. The tower is a great site for those who are interested to know more about the complexities of the European nation. It is quite easy to reach and so should be a part of all London visitor’s itineraries.

The Corfe Castle is around three hours’ drive from London. It is located on the top of a hill, beside a quaint village in Dorset. It was built using limestone during the 11th and 12th century and stands 20 meters tall. During the English civil war, this castle was defended by Lady Bankes. Like many fortified castles in the region, the captors have damaged the interiors so that the enemies could not further use them. You can still see the murder slits and arrow holes.

The Bodiam Castle located in East Sussex is one of the best examples of a medieval fortress. Even though the structure was built as a symbol of status back in the 14th century, it still has the features of a fortified medieval palace. Even though the interiors are in ruins, the exteriors present a beautiful view with soaring towers and high walls. Other than pretty views, the fortress makes for a great background for those who love to click pictures. Do explore this beautiful castle on your next trip to London.

Further Read: Christmas In London 2018: Top 10 Experiences For A Lively Celebration Like Never Before!

The glorious city of London is known for its rich history as embodied by the castles in and around it. Castles near London are a must to visit when exploring England, as they are the most prominent proofs of the regality of the queens and kings of London. If you are planning on your trip to London, do not forget to add these royal castles to your list.

Camping In Uttarakhand: 25 Best Spots To Treat The Adventure Junkie In You In 2021!

Temples In Kovalam: Time For A Spiritual Tour In The City With Your Family

Note Down These Electrifying Things To Do In Munnar In December Which You Must Not Miss!

Islands Near Krabi: Head To These Awesome Islands For A Relaxing Vacay!