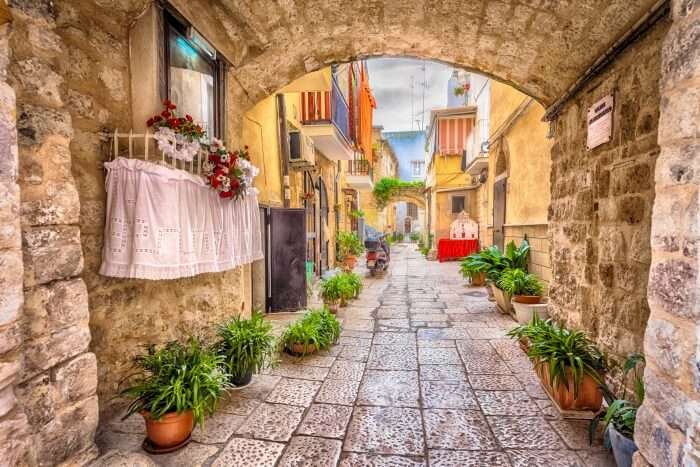 Situated on the Adriatic Sea, Bari is the capital of Apulia, Italy. It is the second largest city in southern Italy with a population of more than one million. This port city is also known as the heart of the metropolitan region as it is the hub to various commercial points and economic centers. The city is famously titled as one of the exit doors of the area as many travels from here to other neighboring countries via waterways. This Bari travel guide will give you a brief overview of this lesser-known city of Europe to help make most out of your trip.

How To Reach Bari

Image Source
Bari is well connected to various European cities. About 40 flights travel in and out of Bari on day to day basis. The city also has a well-established network of roads with a great transportation system including trains. A taxi/cab from the airport to the main town would cost approximately INR 2000 to INR 2500. The city administration is working intensively to promote tourism in old Bari town due to modernization and development that has taken place.

Image Source
Bari can be visited throughout the year but, May and June are the most favorable months to visit the city. During the season, days are comparatively warm and nights are cold. The old Bari town, which was the core of pre-Roman and Roman Bari has still managed to retain its medieval planning that includes numerous historical and cultural sites.

Must Read: Only For 2 Weeks In Italy, These Charming Places Should Be On Your Itinerary

Places To See In Bari

According to Bari travel guide lonely planet, a budget of INR 8000 per is sufficient to enjoy the sightseeing, food, and lodging. Here are the few places you can visit:

Image Source
San Nicola basilica is the leading site in our Bari tourist guide. It was constructed between 1087 and 1197. The massive basilica was built to preserve the relics of St. Nicholas. It has immense religious importance all over Europe, and that is why it is a significant pilgrimage destination for Catholics and Christians from the Eastern part of Europe. The basilica seems more of a castle than a church due to its appearance (having a square shape). The highlight of the place is two low towers surrounding the facade.

The ancient basilica houses the Romanesque sculpture arts from south of Italy, mosaic pavements, a bishop’s throne from the 11th century, mythological structures and animal figures etc. The church also acquires a 16th century Renaissance tomb made of marble. Whereas, the museum has an incredible collection of candlesticks from the 12th century and some precious artworks and paintings.

Image Source
The second must-visit destination as per our Bari travel guide is Castello Svevo, which is a castle built in 1132 by King Roger II. The castle was destroyed by King William I of Sicily in 1156, which was reinforced by Roman Emperor Frederick II in 1233. The castle had undergone several transformations after Duke Ferdinand of Aragon acquired it. It was finally taken by King of Naples which was later converted into barracks for the prisoners.

The medieval castle is now being converted into a museum used for exhibitions. It can be accessed from the southern gate. The northern side of the castle is bordered by sea while a moat surrounds rest of the sides. The main features of the castle are the Hohenstaufen tower and the Aragon walls.

Image Source
Lungomare Nazario Sauro is a stunning coastal promenade that stretches to 1000 meter approximately starting from harbor to the Parco per Cani. This seaside resort has a lot to offer, apart from a walking alley one can relish the magnificent architecture and gorgeous white buildings. The place is perfect to sit back and relax while enjoying the Mediterranean sunset.

Image Source
Pinacoteca Metropolitana di Bari is also known as the Painting Gallery of the Metropolitan City of Bari. It is the art gallery of Bari that holds a collection of fabulous paintings and artworks. The painting gallery was named after the famous painter Corrado Giaquinto. It was founded on 12th July 1928 and was initially placed at the Government Palace and later on moved to Province Palace in 1936 along the seaside.

Some of the artworks from the collection are Venetian paintings of the 15th and 16th centuries, a section for Corrado Giaquinto's arts, a medieval section, paintings from the Tuscan School of the Macchiaioli and much more.

Image Source
Piazza Mercantile, Piazza Grande or Piazza Maggiore is the ancient city square used by merchants of the medieval times for trading and business. Many names were in use to address the place in ancient times. In April 1958, it was decided to be called as Piazza Mercantile finally. The square is described as the main trading point in the history of Bari, but it is more popularly known as the meeting point today. This usually busy meeting point offers numerous attractions such as the Clock Tower from the 16th century, the Palazzo Della Dogana built in 16th century by Duchess Isabella Sforza, the Palazzo Sedile and the Colonna inflame or the stone lion.

Suggested Read: 10 Amazing Museums In Bari That Unfold Italian History Like Never Before

Image Source
Bari Cathedral or the Church of San Sabino is situated in the southern part of Italy, Apulia. The cathedral was built between 12th and 13th centuries, majorly towards the end of the 12th century. The cathedral is not as famous as St. Nicholas Cathedral located in the same city. It is named in honor of Saint Sabinus, who was a bishop of Canosa. Moreover, it is home to many relics of Saint Sabinus that were brought here in the 9th century. The present building of the cathedral was constructed over the ruins of Imperial Byzantine Cathedral which was destroyed by King William I in 1156.

Image Source
Altamura is situated in the southern part of Italy at a distance of 45 km from Bari city. Altamura city has a population of 70,595 according to the survey conducted in 2017. The city is divided into two parts: the ancient town and the new town. The new or the modern town was thickly populated during the Bronze Age. It is well known for a certain quality of bread called as Pane di Altamura. The bread is sold in many other parts of Italy. It is interesting to know that a 130000-year-old calcified body of Altamura man was found in Grotta di Lamalunga ( limestone caves) near the city.

The city is also home to scores of ancient landmarks like Romanesque Cathedral, the cathedral of Acquaviva Delle Fonti, a church of Monte Sant'Angelo sul Gargano and so on. The construction of this cathedral city is influenced by gothic architecture from the time of Frederick II.

According to our Bari travel guide, this destination should surely be included in your travel list for an unforgettable experience.

Image Source
Alta Murgia National Park takes the last, yet a very important spot, in our Bari travel guide. This national park is located in the southern part of Italy and was established in the year 2004. The national park spans over an area of 677.39 square kilometers. This huge national park promises to offer mesmerizing landscapes, ancient disowned villages and rocky structures. It is also a great site to enjoy countryside atmosphere where one can indulge in a wide range of outdoor activities like cycling and hiking. Many tour operators from Bari city offer guided tours to this natural region.

Further Read: Nightlife In Italy: 17 Cities That Are A Must On Every Party Starter’s Bucket List!

These are some of the top tourist attractions listed by our Bari Puglia Travel Guide. The city is also known to be a prime site for the study of dinosaurs. Nearly 30,000-footmarks of dinosaur were discovered here in Contrada Pontrelli, which is in Altamura territory. One cannot experience the real taste of Bari city without visiting these attractions. Contact TravelTriangle to plan a trip to Italy and enjoy your holidays like never before!