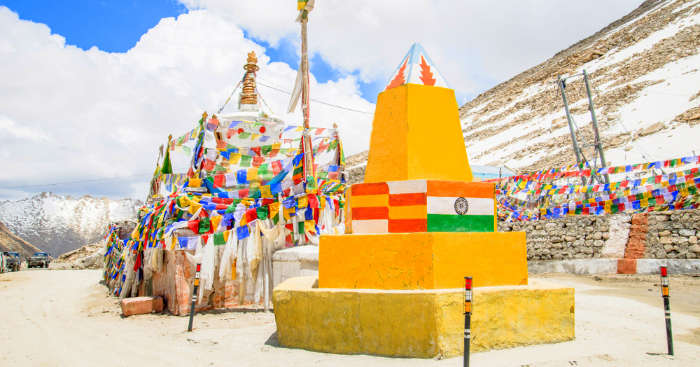 And if you also have the urge to get lost in oblivion, there’s no better place than the third highest motorable mountain road in the world: Changla Pass. Located in the desert land of Ladakh, at an altitude of 17,590 ft above sea level, it is the mountain pass that one must take to reach Pangong Tso Lake. The pass is approached from Leh via Kharu and Sekti village by an asphalt road. The natives or the Changpas claim that the pass was named after the temple at Changla pass, which is dedicated to the hermit, Changla baba. Driving through Changla is no cakewalk, one needs brilliant driving skills to cross the road that is flooded with thousands of small streams, especially when the snow on upper mountains begins to melt.

Not many people know that Changla Pass is also a part of silk route. Not just this, Changla also gained fame after Jurassic ammonoids were found here making it ecologically and historically important. The pass is 15-km long and the roads are absolutely steep. Unlike other passes in the Himalayas, due to border disputes with China, Changla Pass is maintained by Indian Army. The best season to drive on Changla Pass is summer. The pass remains open for tourists from mid May to October, but the most pleasant months are May and June. The melting snow that forms small streams make it a bit difficult for your thrilling bike expeditions. Also, altitude sickness is a common phenomenon here, so you are suggested not to stay there for more than 20 minutes.

Must Read: Dochula Pass, Bhutan: 3 Reasons You Must Visit It

Here is the list of some famous tourists attractions around Changla Pass that you ought to visit on you vacation. Keep scrolling down and read along!

The temple of the top of the pass is dedicated to Changla Baba. It is not some grand site, but the natives’ belief in Changla baba has made it a popular tourist spots. It is said that one must seek Changla baba’s blessing before starting their journey on the pass.

A picturesque village near Changla Pass, Tangste village has only 126 households. The gorgeous Tangste lies on the valley floor, surrounded by mountains, and dotted with patches of green land along the Harong stream. There’s not much to see, but it certainly is a sight to behold, so do not forget your camera.

Suggested Read: Bhutan In December: A Quintessential Travel Guide For An Exquisite Vacation!

Re-established in 1672 by a Ladakhi king Sengge Namgyal, Hemis Gompa is a Tibetan monastery of Drukpa Lineage. This is the venue for the annual Hemis festival that honors Padmasambhava. The monastery may not look as mesmerizing as the ones in Thiksey and Diskit, but on misty mornings, Hemis monastery looks breathtaking.

Suggested Read: Visit These 15 Monasteries In Ladakh For A Purifying Experience In 2021

Shared by India and China, Pangong Tso Lake is a landlocked lake of saline water, which completely freezes during winter. This endorheic basin, situated at a height of 14,270 ft above sea level is home to many migratory birds, but supports no aquatic life. Its timeless beauty and inspiring blue color often leave visitors speechless.

Changthang is a high altitude Tibetan plateau with vast highlands and grand lakes. Home to Changpas, a semi-nomadic Tibetan people, Changthang shows how people in the cold desert live in harmony with nature. Not many people dare to traverse the land as the weather of this region is highly unpredictable and poor.

Further Read: Leh Ladakh Bike Trip 2021: Everything You Need To Know From The Scratch!

All excited to visit the Changla Pass? Known as the 3rd Highest Motorable Mountain Road in the world, Changla Pass will surely make for an excellent spot for your next vacation. So, think no more, pack only the necessary stuff, go through this guide, plan your Ladakh vacation and leave right away!

Q. Which is the highest motorable road in the world?

A. Khardung La is the highest motorable road in the world.

Q. Which is the highest mountain pass in the world?

A. Kaksang La is the highest mountain pass in the world.

Q. What is the highest mountain you can drive up?

A. Mount Evans is the highest mountain you can drive up to.

Q. Which is the highest roads in the world?

A. The Leh-Manali Highway is one of the highest roads in the world