Christmas In Canada: 17 Best Places To Enjoy The Canadian Celebration 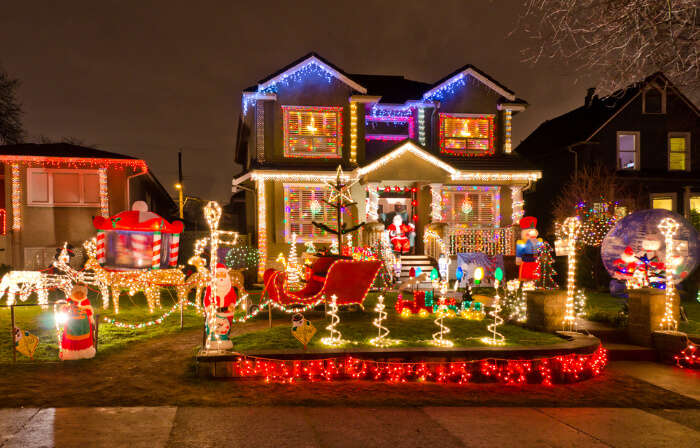 Canada is a nation where winter is a way of life, and folks here warmly embrace the vacation season, lighting up their homes and streets, holding vivacious parades and festal celebrations. With all these diverse festive cheer to settle on from, one can be easily overwhelmed by the oncoming of Christmas. If you are fortunate enough to spend Christmas in Canada, there are a few specific places from where you can gather some special Canadian celebratory experiences. This list will tell you about the unique Christmas experience that each place offers. So start planning for the big day!

Image Source
With visitor counts reaching well over half a million people, Canada’s largest city holds the annual Santa Claus Parade, being the largest of its kind in the world. Besides attending that, throughout the month of December, you can take in the barrage of lights for a festival that kicks off with the lighting of a massive Christmas tree in front of the City Hall at Nathan Philips Square. So, do not miss out on this event!

Must Read: Festivals of Canada: 8 Unmissable Extravaganzas That Will Give Celebration A New Meaning

Image Source
Beginning with an illumination ceremony in early December, the capital city drowns the Parliament Buildings in dramatic lights. The Prime Minister often himself flips the switch. Inclusions in the ceremony are hot chocolate, melodious Christmas Carols and Beaver Tails. This ceremonious celebration is followed by a month of lustrous beauty throughout the city, where the Parliament Hill and more than 60 sights including the Confederation Boulevard are immersed in lovely illumination displays.

The already majestic Niagara Falls is made even more so during the city’s annual Winter Festival of Lights, which strings about more than 3 million lights throughout the city. This includes the world’s largest Canadian/American illuminated flag. Weekly fireworks over the falls for the duration of the festival treat guests to an awe-inspiring view, and a number of other festive events like musicals, shopping fairs and concerts can keep them busy.

Suggested Read: Shopping In Canada: To Get The Best Of Everything In The Land Of Maple Syrup

Image Source
This one has such a natural appeal to it, that even if they did nothing out of the ordinary, one can still have a memorable Christmas in Quebec City. With its Cobblestone Lanes, white and fluffy snow, some of the most striking and historic architecture in Canada, this place including its capital – of la Belle province has a lot going on. QuebecAdabra! – a festival that offers illuminations on a massive scale, an authentic German Christmas market along with an impressive light show, where you can sip mulled wine and browse for gifts. If you are yet to decide where to spend Christmas in Canada vacation, Quebec City will surely not be a disappointment.

There is no better place to be a kid than in Saskatoon during Christmas. University of Toronto’s Rotman School of Management recently published a study where it has been shown that Saskatoon has the highest number of candies and toy stores per capita compared to anywhere else in the country. Combine that with the good probability of having snow for the 25th of December, and you’ve got yourself a magical Christmas right there.

The weather stays moderately mild in Vancouver through the season of holidays, but the city on the other hand stays wholeheartedly festive with the Rogers Santa Claus Parade, and you’re always an hour away from deep snow. Here, as many as 80 boats strung with over 100,000 lights parade around False Creek, Port Moody and Deep Cove. Bonfires are arranged and Christmas carols are arranged which you can sing as you watch the spectacle, and book yourself a spot on a dinner cruise on board one of the ships.

Image Source
Montreal is another city in Canada which is darn cold during the holiday seasons, but still charming all the same, especially Old Montreal. Lined with historic buildings and winding cobblestone roads, one can enjoy a frosty Christmas over parade of lights overhead, soaking in the calmness and the beauty. So, if you’re a history lover and want to escape the hustle and bustle of the city life, visit Montreal!

It’s not usually a trip to the zoo that’s the first thought off of an average person’s head when it comes to ways for celebrating Christmas. But in the Canadian city of Calgary, it’s a closely observed tradition. Every year, from late November to early January, the Calgary Zoo organises the annual event called Zoolights. A sum total of 1.5 million lights will greet you as you traverse through the zoo premises sipping hot chocolate, and visit the kids-only Elf’s Toy Shop, or Candyland, and even something called “Santa Vision” which allows kids to directly speak to the white-bearded man in the red suit up in the North Pole!

The small Newfoundland community on the Avalon Peninsula hosts an annual Festival of Lights that includes the largest Nativity scene on the east of Montreal – an intelligent light park, fireworks, concerts and, two Santa Claur Parades-one during the broad daylight and another for all the nocturnal birds out there.

Suggested Read: Temples in Canada: 9 Places That Are A Testament To This Country’s Diverse Culture

The Candy Cane Lane is home to a homely and lively atmospheric crowd, eight blocks in Edmonton’s West Lane which becomes a festive wonderland every December. At the height of its popularity on weekends, before Christmas, the outstanding spectacle can lead to humongous traffic jams leading to people opting to walk instead, or use the websites to book horse drawn sleigh rides.

Another place to spend one’s Christmas holiday in Canada is Dawson City. A boat parade takes place here around Christmas and one can be a part of this interesting tradition if they are in Dawson City for the festival. The locals decorate their boats and the parade is quite a spectacle. One can also enjoy sled rides on their trip to Canada during Christmas.

Suggested Read: 11 Places To Visit In Maine That’ll Make You Fall In Love With The Town

Almonte is a beautiful small town in Ontario which transforms into a winter wonderland around Christmas. A pretty place to visit all year round, Christmas brings out the charm and magic of this place. With chic cafes to sit and sip coffee, the town looks like a perfect movie set. So, if you are looking for an Instagrammable Christmas in Canada, then this is where you should be headed.

The Christmas spirit begins early in St. John’s and there are multiple events that take place here around the festival. One such event is the Mummers Festival, which is both unusual and interesting. Newfoundlanders during this festival dress themselves in masks from head to toe, and after their identity is hidden, they head out to sing and dance. This is one such trsdition that takes place here and you can be a part of more if you plan to celebrate Christmas at St. John’s in Canada.

Suggested Read: 22 Best Places To Visit In Canada In 2020 That Will Leave You Spellbound!

Christmas is one of the best times to visit Victoria in Canada. The city is full of festivities and Christmas vibes. One can take a walk along Inner Harbour or shop at the beautiful cobblestone streets. Sip on Christmas cocktails and celebrate with your folks at the dazzling yet Christmas cozy pubs of Victoria.

Airdrie is another great place to celebrate Christmas in Canada. The highlight here is Airdrie Festival of Lights which is a dazzling festival that takes place in December here. This is an annual festival taking place from December 1st to 31st and features Christmas lights and decorations. If one wants to see Christmas decorations in Canada, then this is one of the places and festivals to be a part of. Other highlights are the bonfires and delicious hot chocolate.

Suggested Read: Skydiving In Canada: A Must-Have Experience On Your Canadian Holiday

A Christmas day in Canada can’t be better than the one at Mont Tremblant. It is a city which has a plenty of activities for its visitors. Other than Christmas charm, there are so many winter activities that one can enjoy here. Skiing and horse sledding are two eciting activities to do in Mont Tremblant in Canada.

If you are planning a trip to Canada for Christmas with family and kids, then Simcoe in Ontario is a great town to be in for the festival. Christmas vibes turn this town into a sparkling wonderland, and what would be a better Christmas for kids, then a beautiful place covered in pretty lights. This town turns into a gleaming paradise each year, and you could be a partof it, this Christmas!

Now, you know how to spend Christmas in the best manner! With this plethora of options at your disposal, you can choose your way of celebrating Christmas in Canada. In this multicultural country, you will easily find something that floats your boat, and you might easily expect one of the best Holiday seasons of your life!

Q. What is a traditional Canadian Christmas dinner?

A. A traditional Canadian Christmas dinner includes turkey with stuffing, mashed potatoes, gravy, cranberry sauce, and vegetables such as carrots, turnip, and parsnips

Q. What is there to do in Toronto at Christmas?

A. You can attend the Santa Claus parade in Toronto for Christmas.

Q. What do they do for Christmas in Canada?

A. Christmas is celebrated in Canada by decorating one’s houses with Christmas trees, lights and other decorations. The meal prepared for Christmas is often roast turkey.

Q. Do they celebrate Christmas in Canada?

A. Yes, Christmas is celebrated in Canada, and it is an official holiday there.

Q. Which is the best place to spend Christmas in Canada?

A. Some of the best places to spend Christmas in Canada are:
1. Toronto
2. Ottawa
3. Quebec
4. Montreal
5. Vancouver

Q. How long is Christmas break in Canada?

A. Christmas break is usually for 2 weeks and includes both Christmas and New Year.

Q. Does it snow in Canada at Christmas?

A. Yes, it snows in Canada during Christmas and one can easily celebrate a white Christmas here.

Eid Ul Adha 2020: Facts About The Festival Of Sacrifice

Onam Festival: An Absolute 2020 Guide To Celebrate The Harvesting Season In Kerala