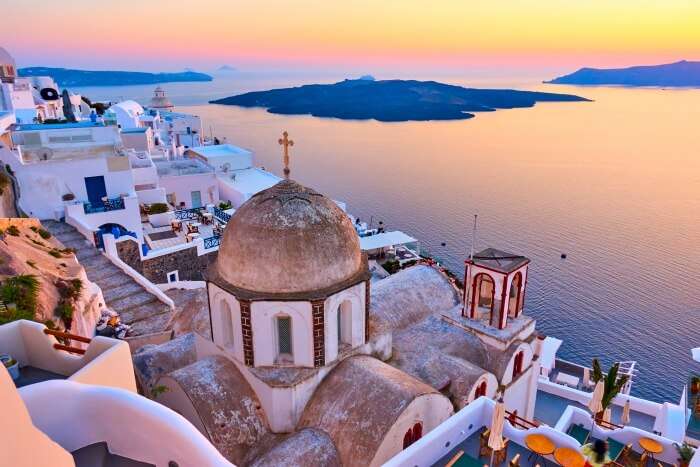 Europe, with its dreamy architecture and lush green landscapes, is also known for its rich cultural history and tradition. Europe remains one of those few places on the planet which have refused to replace their roots. It believes and takes immense pride from where it comes from. Europe has its history replete with religious wars and strifes and this has the led to the construction of Protestant and Catholic churches all over the land. Further books and movies like Dan Brown’s Angels and Demons have increased the interest in children and the youth towards the Churches in Greece.

Most Famous Churches In Greece

Each church has its own share of rich history and sacred atmosphere. Ancient churches of Greece are one of the major tourist attractions. These churches in Greece NY are one of its own kind. Buildings like this are not made anymore.

Located in the small isle of Sifnos in Kastro village this church is built according to old Cycladic architecture. Sitting on the top of an aisle in between the blue water, this church looks magnificent when hit by strong wild waves making a very beautiful picturesque sight. We might have seen this church in many movies, always pictured against a romantic setting. Sifnos is known as the land of 336 churches. This might be an urban legend or a myth. However, we find the land dotted with numerous small and large alike churches and cathedrals. All of the churches have their own history and splendid architecture. This church, in particular, is one of the most photographed places on the planet.

Must Read: Christmas In Greece In 2018: A Guide For The Lovers Of Christmas Festivities!

Among the most important Greek churches in Greece, one is Church of Megalochari situated in Tinos island, a hill above Chora. It is known that this church is a place of origin of the icon of the Virgin Mary. It is the strong belief of people that this church is holy and the icon is miraculous. Many pilgrims come here to ask for help and they believe that their which are granted. Greece is an amalgamation of everything that is good and has its roots way back into the past. The perfect time to visit Greece is in spring and autumn.

The church from the time of Paleo-Christian era in the village Parikia located in Paros has a great architecture making it one of the famous monuments in Greece. It is dedicated to Virgin and Agios Nikolaos built around the 6th century. Greece’s temperature varies throughout its mainland. You can find mild winter showers and sunny summers. There are hardly any scenarios of extreme temperatures. So, visiting this church in northern Greece won’t be a big problem.

Greece particularly has its own share of beautiful churches and cathedrals. Greece is a land which has been made immortal by Iliad and Aeneid. One of the largest church in Santorini, this church is located at the main square of Perissa above the beach was built in the early 1830s. The structure of the church is huge with a blue dome and a large bell tower which looks beautiful in the evening as the sunsets by the beach. As a part of the country known for its contribution to the world of art, music, sculpture, music, literature, this church also reflects the aspects of this rich culture.

Suggested Read: 10 Castles In Greece That Testify The Country’s Glorious Past

A church dedicated to the protector Saint of Chora island, Panagia Gremiotissa was built in 1797 AD. This hill is above the Aegean Sea and two more churches are situated on the same hill. This church comes in the list of top Athens churches of Greece. This is largely because of the fact that its architecture combined with the historical aspects appeal to the minds and souls. It attracts a lot of crowd everyday of the year, specially during spring and autumn.

Built during the early 1890s, this church was built with orthodox Greek art which is rare to find anywhere these days. Dedicated to the saint of Zakynthos island, Agios Dionysios made after his death is the landmark of the island. This church has its position high in the list of Greek Orthodox churches in Greece. As it is an old church, it feels like a ride back in time. The aura around the church is peaceful and serene enough that it can put worries out of your mind. At least while you’re there.

Suggested Read: Visit Greece In October For A Relaxing Vacation In The Wondrous Greek Setting

This church of Agios Ioannis is situated in a quiet and majestic place called Skopelos. Now, it is not one of those places which make it to the most visited tourist places, however, one should really go to find some peace and calm in this terrain. The movie Mamma Mia has brought forth this place in front of the whole world and the possibilities of adventure in this place seem endless. However, it is a small church which is really the main attraction. This church is located on the top of a hill. To reach the church is not really an easy task but it is really worth the effort. The view is splendid.

Further Read: 10 Restaurants In Greece That Are All About Classy Interiors & Delicious Cuisines!

This list is not in any way enough to give you a picture of all the magnificent churches of Greece, nevertheless, this list gives you all the places one should not miss when in the country. Greece tops all the countries in Europe which are known for the rich cultural heritage of the past. Moreover, it is in Greece where all of the histories began. The crystal clear blue waters of Sifnos, reflect the bluest of the skies and that very sight is something one should travel to Greece for.

Q. What are some of the most famous churches in Greece?

A. Some of the famous churches located there are Church of seven martyrs, Church of Megalochari, Church of Ekatontapiliani and more.

Q. What are some of the catholic churches in Greece?

Q. What are some of the most beautiful churches in Greece?

A. Most of the churches in Greece are extremely beautiful, and some of the more famous ones are Church of Agios Sionysios, Agio Ioannis-Skopelos, Church of Megalochari and many more.

Q. What are the most famous historical churches in Greece?

A. Some churches in Greece hold strong significance in Greece’s history. Some of the historically significant churches located in Greece are Church of Ekatontapiliani, Panagia Karmiotissa, Church of Megalochari and many more.

Q. What is the significance of the church of seven martyrs in Greece?

A. The famous church of seven martyrs is quite popular in the world because it is located in the picturesque isle of Sifnos and it has been a popular shooting spot for several Hollywood movies.

Q. When is the best time to visit Greece?

A. The best time to visit Greece is from April to June and September to October. During this time, the weather is perfect to witness its beauty.

Q. How many days are enough to explore Greece?

A. You can explore the entirety of Greece within four days. If you do not have much time, you can even cover the place within two days. It entirely depends upon how many places you are going to cover.

Soar The Skies With Skydiving In Greece: The Best Adventure To Experience In 2020!

France In October: Witness The Beauty Of The City During Fall