10 Marvelous Churches In Hong Kong Where You Can Unite With Your Inner Self! 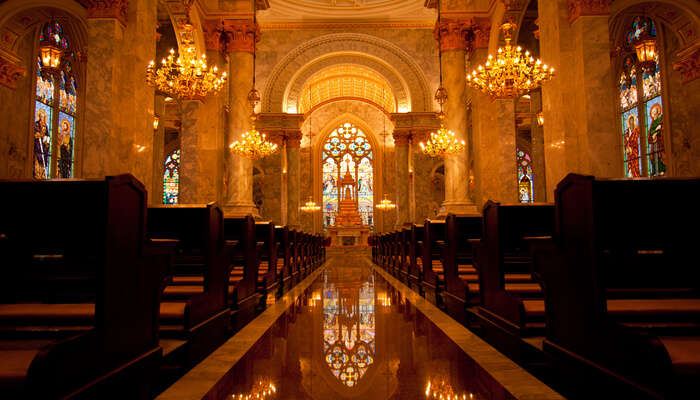 Hong Kong is a rich amalgamation of cultures due to its colonial history. While traversing the lanes of Hong Kong, you will witness that its population is a mixture of Chinese, European, and Asians. Here, Churches share space with Buddist temples and mosques. Since the mid-19th century, Catholic Church in Hong Kong provided support to several missionaries and now more than 800,000 people follow Christianity there. Gradually, both Protestants and Catholics started working for the local community and organized welfare programs. As a result, there is no dearth of cathedrals and churches in Hong Kong. So, if you are traveling to this region of southern China then check out these marvelous churches in Hong Kong.

Take a quick look at this list of churches in Hong Kong that you must explore while holidaying in this region. Get ready to be mesmerized by the beauty of some of these churches.

Rosary Church is one of the oldest Catholic churches in Hong Kong which is built in the Gothic style. Due to its style, the Church has been classified as a Grade I Historic Building since 2010. During the Boxer Rebellion in China, the population of Catholics kept increasing. To create a safe abode for these people, Dr. Anthony Gomes donated around $20,000 to build this church in 1903. It was designed by Palmer & Turner and the construction completed by 1905. The Church remains a historical emblem for the people who fought in the battle and for their families also.

Must Read: 8 Hostels In Hong Kong For A Leisurely Yet Lively Vacay

Originally, St. Joseph’s Church was built in 1872 but witnessed a blow in 1874 due to typhoon. As a result, the church was consecrated again in 1968 and was designed into the shape of a ship. The church is painted in teal blue and has an important place in the hearts of the Filipino community as it showcases a 17th century wood sculpture of Filipino Saint Lorenzo Ruiz.

Suggested Read: 7 Beautiful Islands In Hong Kong To Have An Amazing Tropical Vacay

3. Our Lady Of Mount Carmel Church

This church is different from others as it is not a stand-alone structure but is situated in a private multi-storey building. The church has a big skylight with sparkling crystal beads hanging down which is worth witnessing. As the number of people grew in the church, the priest and faithful people were determined to build a new church which opened in 1950 with the name Holy Souls Church and later renamed to Our Lady of Mount Carmel Church.

This small Catholic church is located on the Broadway Road and has been listed in the Grade II historical buildings. This elegant church was constructed in the Italian Basilica style in 1923 with four Corinthian columns. Nowadays, St. Margaret Mary’s Church is a popular wedding place for people in Hong Kong. A A number of people still pay a visit to this church as it is active in organizing welfare and other services.

Holy Trinity Cathedral is one of the top as well as the oldest Anglican churches in Hong Kong that was established in 1890. It is one of the three Anglican cathedrals in the region along with St. John’s Cathedral and All Saints’ Cathedral. The structure of this cathedral is a blend of traditional and western Chinese architectural styles. During the Second World War, the church witnessed some serious damages that were repaired later.

Suggested Read: A Guide To Spring Lantern Festival In Hong Kong: All About Love, Lights And Legacy

In 1987, Cardinal John Wu divided the Shatin area under three parishes namely, St. Benedict Parish, St. Alfred Parish, and Blessed Martyrs of China Parish. In 1993, the St. Benedict Church was established by Cardinal John Wu. It became a solid base for missionaries and is now one of the top churches in Hong Kong.

St. John Cathedral is at a prime location as it is surrounded by HSBC Building, Bank of China Tower, and many government buildings. It is now designated as a monument of Hong Kong as it is one of the oldest Western ecclesiastical structures in the region. Next to the cathedral, you will find a Memorial ross that was commemorated in the honor of soldiers who were killed in the First World War.

In 1953, catholic missionaries acquired the deserted TV studio and converted it into a small chapel. At that time, it was known as the Shatin Catholic Center but was renamed to the Sacred Heart of Jesus Church in 1954. As the number of Catholics was increasing every month, a new church was built with the help of hefty donations in 1977 that was named St. Alfred’s Church.

Constructed in the early 20th century, St. Paul’s Church resembles the Gothic architecture. It was renovated in 1934, after the building was occupied by Japanese soldiers. The church was again renovated in the early 1990s. If you are looking for an ancient place then you must visit this church in Hong Kong.

Further Read: Camping in Hong Kong: 10 Best Sites In The Middle Of The Bustling City

A visit to Hong Kong is incomplete without exploring these churches. So, if you want to delve into the history, culture, and religion of this region then do visit these top churches in Hong Kong. And if you are looking for a trouble-free vacation then plan your retreat to Hong Kong with TravelTriangle and get a chance to customize your own package according to your own will. Without further ado, head to this region and get a chance to gape at these marvelous churched in Hong Kong.

What religion do most of the people in Hong Kong follow?

How many Christian churches are there in Hong Kong?

What is Hong Kong famous for?

Being a cosmopolitan city, Hong Kong is widely regarded as a hub for international trade and investment. The city of Hong Kong is also known as a paradise for shopaholics and foodies. Besides Hong Kong features a wide number of tourist attractions.

Which is the oldest church in Hong Kong?

Is Hong Kong a state, a city or a country?

Hong Kong is a sovereign state within China. However, Hong Kong has its own currency, legal systems, and civil liberties.

What is the culture of Hong Kong?

What are the English speaking churches in Hong Kong?

Books, travel, art, music, and dance define Bhawna perfectly. You might find her sitting on a vacant metro platform, engrossed in a book, scribbling something, sipping on some lemon soda or planning an itinerary for her next trip.

Victoria Peak In Hong Kong: A Guide To The Epitome Of The Country’s Beauty!

12 Things To Do In Kowloon That Will Show You A Side Of Hong Kong You’ve Never Seen Before!